Amazon’s 2 best-selling Black Friday deals were just bundled together at a deep discount – BGR
Click to Skip Ad
Closing in...

Amazon announced it’s Black Friday best-sellers as Black Friday was wrapping up last month, and there was actually a surprise or two on the list. The items in the number 1 and number 2 slots were hardly surprises, however. The Fire TV Stick and Echo Dot were both on sale at deep discounts on Black Friday, and Amazon customers took advantage. But don’t worry if you missed out on the deals because Amazon has a new bargain lined up. For a limited time, you can get the Fire TV Stick with Alexa Voice Remote + Echo Dot Bundle on Amazon for $30 off, which drops the combined price almost as low as it was on Black Friday.

* Pair the included Fire TV Stick and Echo Dot and get hands-free voice control of your Fire TV with Alexa.
* Find, play, and control movies and TV shows from Netflix, Prime Video, Hulu, SHOWTIME, NBC, and more using just your voice.
* Fire TV Stick delivers streaming access to over tens of thousands of channels, apps, and Alexa skills and more than 500,000 movies and TV episodes.
* Echo Dot has 7 far-field microphones that hear you from across the room for hands-free voice control, even while watching a movie or listening to music.
* Ask Alexa to play music, order a pizza, or provide information. With compatible smart home devices, you can turn on the lights, set thermostats, and more.
* Prime membership unlocks thousands of movies and TV episodes, including Thursday Night Football, Amazon Original Series, Amazon Channels, and ad-free listening to millions of songs with Prime Music. 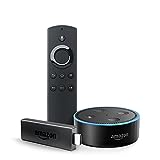