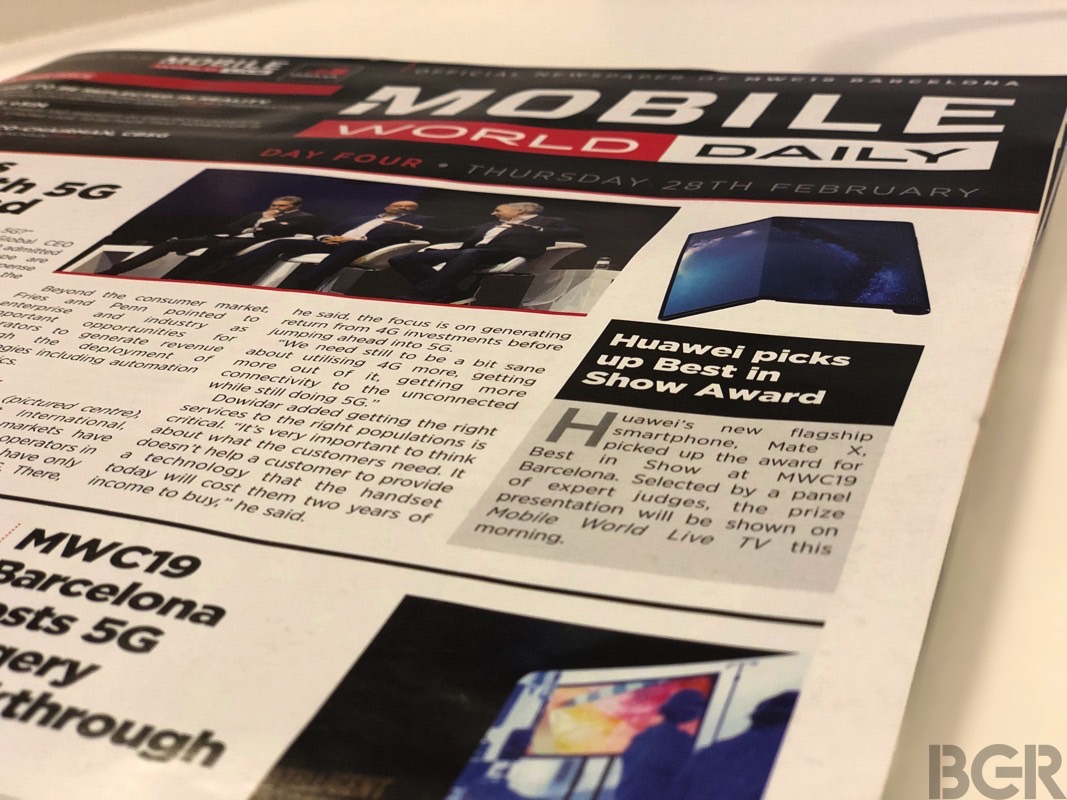 There’s no question that MWC 2019 was the most important edition of the event in years. We’ve not only seen an collection of foldable devices, spearheaded by the Galaxy Fold and the Huawei Mate X, but we’re also getting an early look at 5G. We’re no longer looking at concepts that will take several years to hit markets.

The 5G phones are upon us, and MWC brought us quite a few of them. And carriers around the world are about to take their 5G networks live. With that in mind, let’s check out the best mobile technology from MWC 2019.

In case I haven’t made it clear, 5G was really the star of the show. Phones like the Galaxy S10 5G, Mate X, LG V50 ThinQ, and the OnePlus 5G phone were all unveiled before or during the show. I got to experience 5G on devices that will hit stores in the coming months, including playing a game that was streamed from the cloud to a mobile phone hooked up to a big TV. 5G is real, folks, and we’re almost ready to get our hands it.

As for devices, we didn’t actually get to see the Lenovo ThinkVision M14 at MWC. It’s an ultra-slim, ultra-portable external monitor that’s quite affordable and will easily connect to your equally portable laptop. If you need more screen real estate on the go, you’ll have to keep an eye out for this one.

Lenovo unleashed a flurry of enterprise and consumer laptops, including affordable in-between devices. The new ThinkPad X390 workhorse is one of the models that stands out. It’s the smallest ThinkPad model, featuring a 13-inch screen in a body that would have previously housed a 12-inch display. It has a few neat security tricks up its sleeve, as well as support for Wi-Fi 6 and global LTE, a bunch of ports and up to 17.6 hours of battery life. Prices start at $1,099, and it’ll be available in June.

The 2019 edition of the Huawei MateBook X Pro is even better than last year’s. The original X Pro turned out to be a fantastic Windows laptop, and Huawei says the new version takes another step forward. The new MateBook X Pro should be even more powerful, as expected, but what makes it unique is the new software features that should make living with Windows 10 and Android a lot easier than before.

The Mate X is easily the best foldable of MWC 2019, and we’ve already told you a ton about it. Many questions linger, but the same goes for Samsung’s Galaxy Fold, which is really the only contender the Mate X has. That said, just look at this thing! It’s no wonder it was voted the best in show at MWC.

Samsung went its own way when it came to this year’s Mobile World Congress. It skipped the regular Sunday evening press conference to unveil the Galaxy S10 and Fold a few days early. But the Galaxy S10 5G was only available for a hands-on experience at MWC.

It’s even bigger than the Galaxy S10+ and Note 9, and features 5G connectivity. It’s probably the best 5G phone coming out of the show, and I’m including traditional, non-foldable phones — the kind of devices that you might actually want to buy. As for the regular Galaxy S10 models, they would have probably stolen the show had it been not for the Mate X. It also didn’t help that the Galaxy S10 wasn’t really a surprise.

Speaking of surprises, the Xperia 1 certainly qualifies. Sony is finally catching up with its rivals when it comes to design and features, and the Xperia 1 is just marvelous to touch and hold. Sadly, it’ll be late to the market, launching well after many people have spent their cash on a Galaxy S10.

The only things lacking about the Nokia 9 PureView are the design, which is too bland compared to all the 2019 flagships, and the specs (Snapdragon 845 processor). But the phone sports an amazing penta-lens camera that doesn’t have an equivalent on competing devices. At least in theory, the Nokia 9 has the best camera of the show, pending more reviews, of course. It’s a phone to consider this year, especially considering that it’ll sell for $599 next week.

The LG G8 ThinQ is one of the best smartphones of the show, but likely one that will be quickly forgotten, having to compete against the Galaxy S10 and the likes. The handset does come with two innovations that nobody in the business has, including a display that doubles as a pretty loud speaker, and a Face ID-like selfie camera that lets you control the phone with gestures, and features a Hand ID recognition system that reads your veins.

Samsung’s brand new wireless earphones were also unveiled at the Galaxy S10 event that preceded MWC 2019, but they’re still deserving of a shout out. The AirPods alternative comes with wireless charging and can be charged by the Galaxy S10. They’re hardly the only new headphones coming out of MWC, but you should definitely check them out. The earphones were bundled with Galaxy S10 preorders around the world, but are already sold out.

This 18,000 mAh battery is an-all screen phone with a slide-out camera. It’s crazy, but there might be a market for these, and it’s one of the best looking battery phones yet.