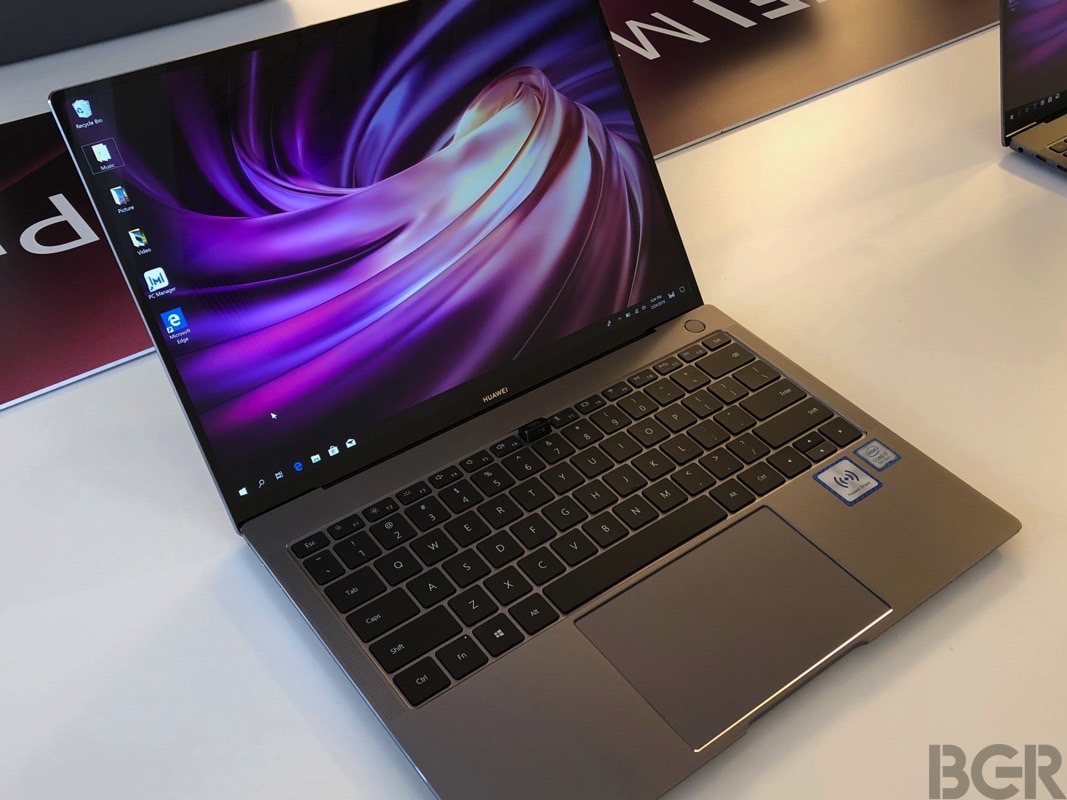 Instead of launching new mobile phones last year at MWC 2018, Huawei unveiled a brand new high-end laptop that looked like a MacBook Pro competitor, as well as a bunch of new Android tablets. The notebook is without a doubt one of the devices you need to check out before you buy a new Windows 10 machine. But if you haven’t upgraded your laptop in a while then you should know Huawei is back at MWC 2019 with an even better version of the MateBook X Pro. The company calls it the new MateBook X Pro, and it’s the flagship of the MateBook series.

At the low end of the spectrum is the MateBook 13 laptop, a MacBook Air alternative that Huawei unveiled at CES. Since then, the company has had time to upgrade the screen to a touchscreen version and add a few smart features to it, which I’ll touch on later.

The MateBook 14 is a better version (it’s the one in the middle in the following image). It has a more impressive screen-to-body ratio (90%) than the 13-inch model, and the 14-inch display offers 2K resolution and a 3:2 aspect ratio just like the Mate X Pro. Like the Pro, this one also features a recessed camera — the camera sits under one of the function keys, which means it only points at you when you want to use it. But unlike the Pro, the MateBook 14 sports a slew of extra ports that some buyers might like, including the USB 2.0 and HDMI.

The star of Huawei’s event on Sunday when it comes to laptops is the MateBook X Pro 2019 edition, which comes with several key improvements over its predecessors. The design is fairly similar to its predecessor, although the logo on the lid has changed — just the name of the company is on the lid this time around.

The new X Pro is just a sleek as its predecessor, featuring a gorgeous 3K display with very tiny bezels. The number of ports hasn’t changed either; we’re still looking at two USB-C ports and one USB-C connector. But both USB-C ports now support full Thunderbolt functionality.

As expected, the new laptop packs an upgraded 8th-gen Intel processor, as well as a discrete 2GB MX250 card. Wi-Fi connectivity is also getting faster thanks to a new chip that should double your internet speed. Finally, the MateBook X Pro’s fan was also improved so you can expect better heat dissipation and efficiency, as well as less noise.

I’ve saved the best new feature of the MateBook X Pro, and of the new MateBook models, for last because there are two caveats you should be aware of. First of all, the smart features that Huawei added to its Windows laptops concern data transfer between smartphones and laptops, as long as both devices are made by Huawei. That means you won’t be able to really take advantage of it in the US where Huawei phones aren’t widely available. That means that MateBook models made for the US won’t have an NFC chip built-in. Secondly, Huawei only paired the new features together with a Huawei phone, so they might not work with other Androids or an iPhone.

In a nutshell, Huawei created a seamless, NFC-based high-speed wireless bridge between Windows and Android for fast, bi-directional data transfer. The new OneHop feature supports up to 30Mbps transfer speeds between the laptop and the smartphone. You can instantly send photos, videos, files, and documents back and forth between the devices. All you have to do is just place the smartphone on the right side of the large trackpad to initiate transfers.

Huawei also demoed other neat features on stage during its event at MWC 2019, including support for a three-finger swipe gesture that will let you capture screenshots on the laptop. Better yet, the screenshot feature also comes with text recognition that will be able to extract the text from any screen capture. Finally, Huawei also introduced a clipboard sharing feature that lets you copy content on one device and paste it on the other.

The new laptops will be available in several markets later this year, with prices and availability details to be announced at a later date.