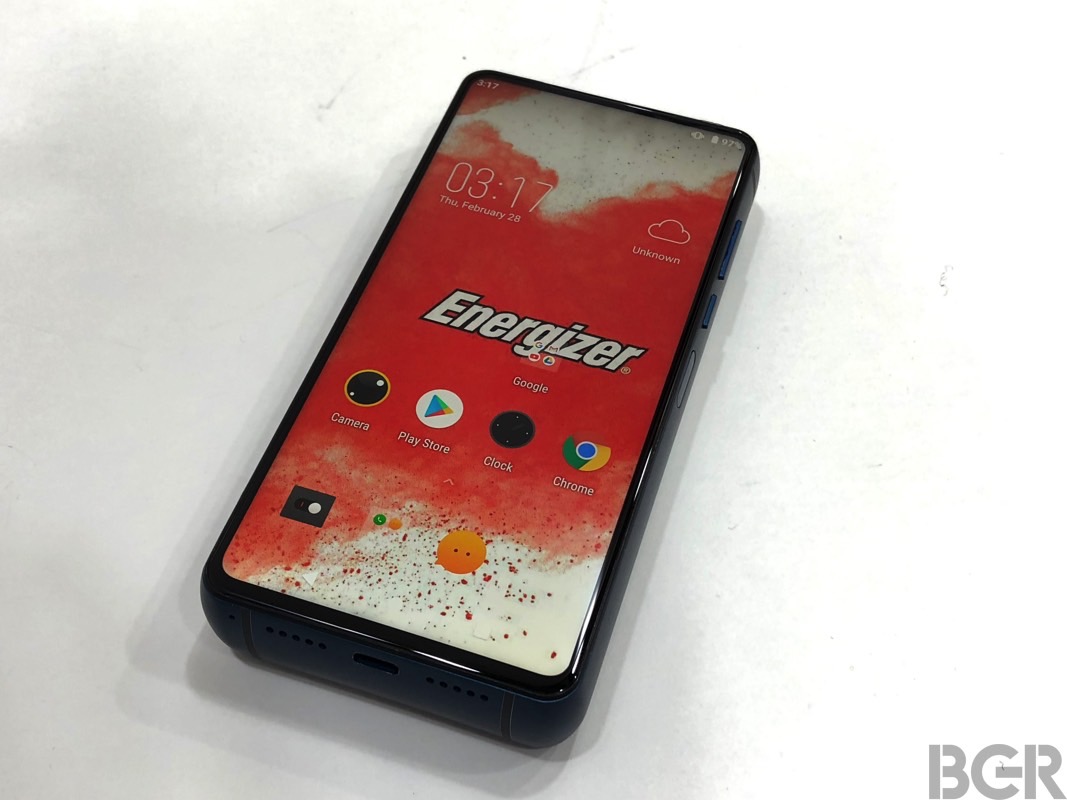 We told you that the Energizer Power Max P18K Pop would come to the Mobile World Congress this year, and I did find the colossal handset while walking the grounds at MWC. Let me tell you this: it’s both incredibly ugly and beautiful at the same time. It’s the weirdest phone I’ve ever touched, but there’s definitely going to be demand for this beast. Think about it, the Energizer P18K Pop is an 18,000 mAh battery that you only have to charge maybe once a week, that also doubles as a smartphone with what is actually a pretty modern design. What’s not to like about that?

Well, the size is one thing to worry about. This “brick” is 18mm thick and it weighs a ton compared to other smartphones. For scale, the new Galaxy S10 measures just 7.8mm thick. It’s not going to be the best device to use for long periods of time, because it’s not going to be a comfortable experience. The phone does fit in most pants pockets though, if that’s something you were worried about, but you’d probably be better off carrying in your bag.

When it comes to the phone part of the Energizer P18K Pop, we’re looking at an all-screen design of the slider variety, with tiny bezels. That means the selfie cam, which happens to have two lenses, slides up from the top of the phone every time you want to snap a front-facing photo. It’s something we’ve seen on other all-screen devices. Exit the photo app, and the camera automatically slides back inside that massive body.

The LCD screen measures 6.2 inches, featuring Full HD resolution and 18:9 aspect ratio. The whole thing is powered by a Mediatek MT P70 processor and 6GB of RAM. We’re also looking at 128GB of storage, microSD support, dual-SIM, 4G, Wi-Fi 802.11 ac, and USB-C connectivity with fast charge support. Energizer did say that the specs may change before the phone is released, though.

On the back we have a triple-lens camera, which is also the norm for 2019 phones. But hilariously, that camera has a camera bump like other phones with similar rear camera setups. Again, this is an 18mm thick phone, so the company surely could have found a way to set the cameras deeper inside the handset and eliminate the bump.

Speaking of internal space, the phone also ditched the 3.5mm headset jack, which is a strange decision for a phone that clearly targets buyers who might not want to charge a phone daily. The same buyers would probably want to use the cheapest, most efficient headphones around.

We’ll have to wait for availability and pricing details as Avenir is finalizing partnerships, but the Energizer catalog does hint the phone might launch by June.