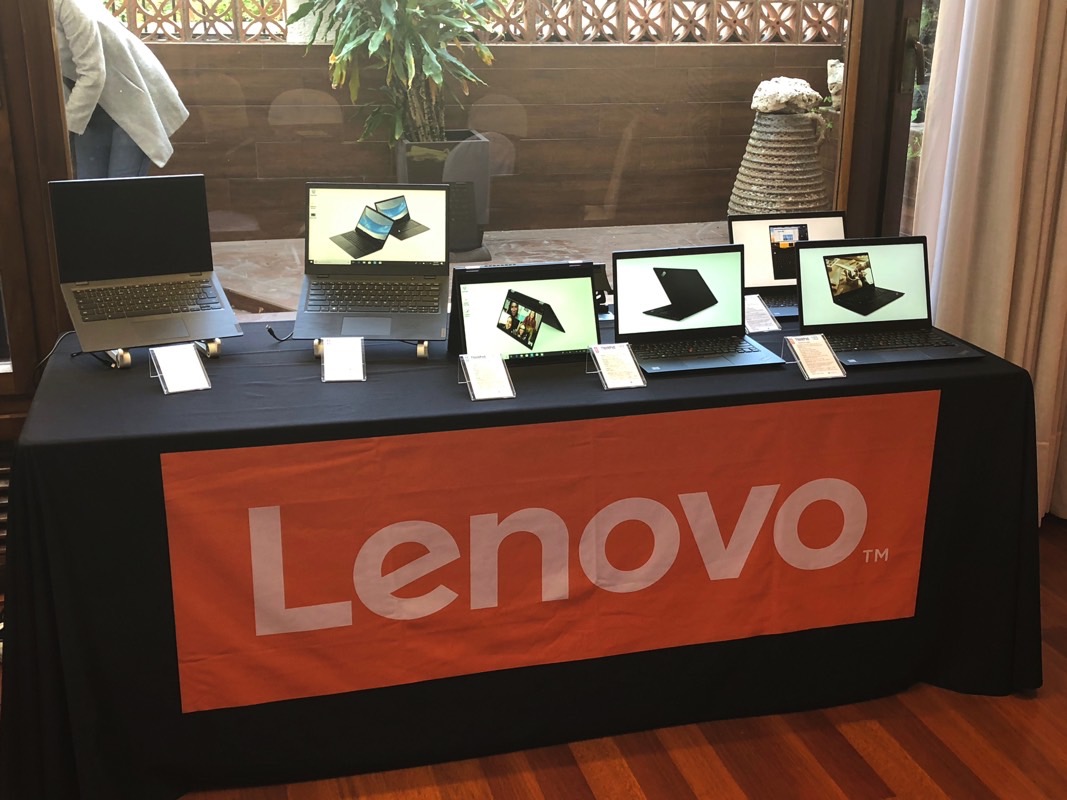 As every year, Lenovo unveiled several new laptop models across its consumer and enterprise lines, including Chrome and Windows-powered machines. On top of that, Lenovo also launched an all-in-one desktop that’s quite easy on the eyes. On top of the expected specs upgrades, including support for the latest Intel and AMD chips, more refined designs with a focus on extending screen size at the expense of the bezels and reducing weight, and a great sound experience Lenovo brought to the table several tricks that you might not even notice at first. And once you do, you’ll take them for granted immediately.

The ThinkPad series received five new models, including the X390, X390 Yoga, T490s, T490, and T590, with prices starting at $999 at the low end and $1,359 for more premium models. All of them come with ThinkShuttter physical camera shutters that let you cover the webcam after you’re done using it. Lenovo also told me that muting the microphones, which in some cases supports dual far-field microphones for better VOIP conferences, is done at a hardware level, meaning it stays muted for as long as you need it to. The Match-in-Chip fingerprint reader, meanwhile, ensures that the fingerprint data never leaves the chip, Lenovo said.

One other security feature I experienced during my brief time with the new machines is the ThinkPad PrivacyGuard, which uses infrared cameras to display an alert on the screen every time someone sneaks behind you.

Lenovo also overhauled the BIOS of the ThinkPad line and added a bunch of security features to it. Yes, you’ll probably never see it yourself, but if you do, you should expect a new user interface for it. Furthermore, the BIOS supports a Secure Wipe feature that can erase the contents of the SSD securely. Also noteworthy is the self-healing feature of the new BIOS, which would let you revert to a BIOS backup that’s safe in case of cyber attacks that strike at the BIOS level.

Finally, one other feature you’ll grow to love and forget about it as soon as you experience is support for Wi-FI 6 internet speeds. You’ll need appropriate hardware in your home that can deliver Wi-Fi 6 speeds, as well as support from your ISP, but Wi-FI 6 will be built right into some of the new ThinkPads. LTE-A support is also included in some of the new ThinkPads if that’s something you’re looking for in a laptop.

Squeezed in between the enterprise and consumer laptops that Lenovo unveiled in Barcelona we have two Lenovo 14 notebooks that are supposed to be sturdy and resilient enough to meet the needs of first-line workers or the classroom. The 14w model runs Windows 10 Pro out of the gate, while the 14e is a Chromebook. Both of them should be able to withstand most shocks and come with a spill-proof backlit keyboard. Any liquid that would come into contact with the Lenovo 14 keyboards should trickle down and exit the laptop via holes found on the bottom. Prices start at $279 for the Chome model, and at $299 for the 14w, with a US launch expected for March.

Like the ThinkPads, the new IdeaPads also get support for the latest hardware available, including Intel 8th-gen and AMD Ryzen 7 processors, narrower bezels, and webcam shutters. Some of the new laptops will also get access to discrete integrated graphics, including Nvidia or Radeon models, as well as new fans for cooling. Also notable is the upgrade in the storage department, where Lenovo aims to drop the slower hard drives in favor of SSDs, or SSD+HDD combos, to further boost performance.

Faster battery charging is also in the cards for IdeaPad laptops, with Rapid Charge technology promising up to 80% capacity in one hour. Backlit keyboards, fingerprint readers, and Active Pen stylus are optional additions to various of the new IdeaPads.

Unlike the ThinkPads, which target the enterprise sector, the IdeaPads laptops are supposed to look and feel even better. The laptops should come in various colors, and they’ll be even slimmer and more portable than before. We’re looking at 2-in-1 designs that let you switch between laptop and tablet mode, as well as traditional laptop form factors.

The IdeaCentre A340 series is an all-in-one engineered for the home. The desktop features an attractive, modern stand that holds either a 22-inch or 24-inch screen with 90% screen-to-body ratio. Pricing for the desktop starts at $499.99 or $679.99 depending on size.

The new IdeaPad and IdeaCentre laptops will be available in several markets starting in March and April, although some specific configurations might not launch until June. In case you need a portable monitor for either of the new laptops, check out the ThinkVision M14 display. You can check all the specs of the new Lenovo computers at this link.