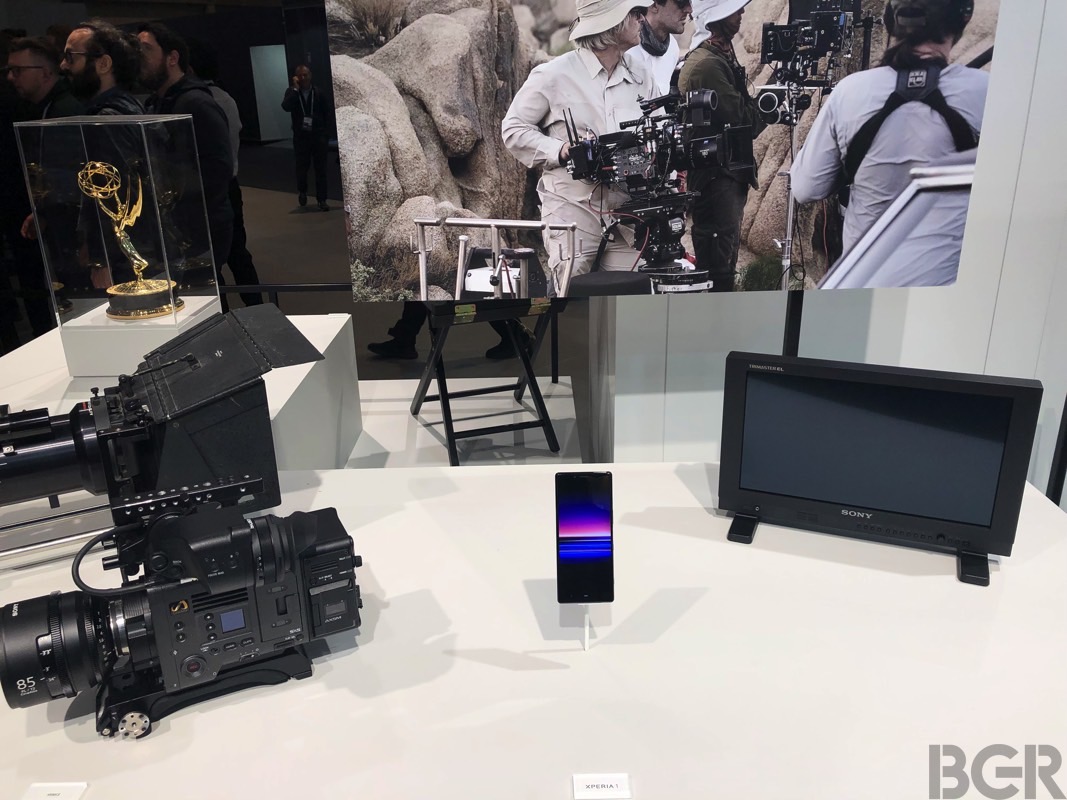 It happens every year when I swing by Sony’s booth at the Mobile World Congress: I leave impressed by its latest smartphones, especially the flagship model.

The same happened this week, as Sony unveiled three new phones at the show, including the Xperia 1, Xperia 10 series, and Xperia L3. And let me tell you this: The Xperia 1 is probably the best-looking traditional Android handset launched at the show. I say “traditional” for two reasons. First, because the Mate X is easily the best-looking smartphone of this year’s Mobile World Congress, but that’s a brand new form factor for the industry. Secondly, because the Galaxy S10 wasn’t technically unveiled in Barcelona, but rather in California a few days before the show.

If you look at the two flagship rivals, the Infinity-O screen’s body ratio is a clear winner. It just offers more screen than the Xperia 1, which has a big bezel at the top. But as soon as you hold this gigantic Sony handset, you’ll instantly appreciate its design.

It’s a weird-looking phone, a lot taller than its rivals, but that doesn’t make it any less beautiful. It’s covered in Gorilla Glass 6 front and back, and those round corners make it a pleasure to hold. Before you ask, yes, it fits in your hand and in your pocket — I made sure for you. It turns out that I wasn’t the only person warning the Sony employee attending the photo booth that I was about to put one of the untethered Xperia 1 dummies in my pocket. Everyone wanted to know if 21:9 phones would fit in jeans pockets. And the answer is yes, they do.

The Xperia XZ2 seemed liked it caught Sony off guard last year, as the phone did not feature an all-screen design and had only one camera on the back. That didn’t make it a less formidable Android device, it just made it less interesting than the competition. The Xperia 1 fixes all that. We’re looking at a triple-lens camera on the back packed with Sony photo technology — and Sony does provide smartphone cameras to lots of other vendors. The display, meanwhile, takes up almost the entire front of the handset, and it just looks beautiful.

The company found a way to leverage an advantage it has over competitors. A different division of the company actually makes movies in the same 21:9 format that Sony Mobile proposes for phones. Combine that gorgeous 4K Cinema Wide 21:9 display with the multi-dimensional Dolby Atmos sound, and you get an incredible result, one that’s been fine-tuned by Sony Pictures Entertainment.

That extra screen real-estate also allows you to run two apps on top of one another thanks to a dedicated menu, and adjust the ratio as you see fit. It doesn’t have to be an even 50/50 split.

Sadly, the Xperia 1 that I photographed was only a dummy unit, meaning it wasn’t functional. I tested the sound and video experience at Sony’s booth on devices that weren’t meant to be touched. The multi-app mode, meanwhile, I tested on the Xperia 10 Plus phone that’s just as big as the Xperia 1. As impressive as the Xperia 1 is, it might not be the Snapdragon 855-powered phone you’ll buy this year.

Sony will have it ready in “late spring.” By then, you’ll be able to buy all versions of the Galaxy S10, including the 5G model, as well as the first OnePlus 5G phone and the OnePlus 7. Moreover, Huawei will launch the P30 Pro as well, not to mention that foldable phones like the Galaxy Fold will be available in late April, with the Mate X coming in the first half of the year. Finally, if you have access to a market where Xiaomi phones are sold, you’d be able to buy the 12GB Mi 9 phone or the very cheap Mi Mix 3 5G handset.

The Xperia 1 will not be in stores this quarter, it doesn’t fold, it doesn’t do 5G, and it won’t be cheap when it finally launches.

So even if the phone looks amazing, and offers excellent content consumption and photography experiences, Sony still has to work on really competing against rivals when it comes to bringing hot devices to market.

If you want one of the other phones Sony unveiled at MWC, and you’re willing to make some compromises, you’ll be able to buy the Xperia 10 and 10 Plus, as well as the Xperia L3, in several markets starting this week.

The 10 Plus is the best option you have to get an Xperia 1-sized phone in your jeans pocket, as long as you’re willing to settle for a metal phone featuring a mid-range Qualcomm processor and a dual-lens camera module.