While it’s generally assumed that the iPhone is far more stable of a device than your average Android smartphone, new data compiled by the Blancco Technology Group suggests otherwise. In a new research report covering mobile device performance for the third quarter of 2016, the data security company relays that 62% of iOS devices experienced a failure of some sort over the last three months compared to just 47% of Android devices.

For purposes of the report, it’s worth noting that the use of the word ‘failure’ is an all-encompassing term that refers to any number of problems, including instances of apps crashing, connection difficulties and overheating.

Taking a deep dive into the report, there is a lot of interesting data to dissect. For starters, the distribution of apps most likely to crash varies wildly across each respective smartphone platform. While iOS devices running social oriented third-party apps like Instagram and Snapchat were more likely to crash, Android devices were more likely to crash when running more basic system apps such as the Address Book and Google Play Services.

That certainly isn’t a statistic favorable to Apple, but the timing of the survey includes the period when Apple launched iOS 10. In turn, it stands to reason that users who updated their iPhones and iPads to iOS 10 were more likely to be running outdated applications more prone to crashing.

In any event, the full list of iOS apps most commonly associated with a crash is as follows.

On the Android side of the equation, most devices had a rather good showing. Across handset manufacturers, Samsung devices experienced the highest failure rate at 11% followed not too closely behind by Xiaomi, Lenovo, and Sony which had failure rates of 4%, 3% and 3%, respectively.

Breaking things down by specific handsets also yielded some surprising results, as evidenced by the chart below. 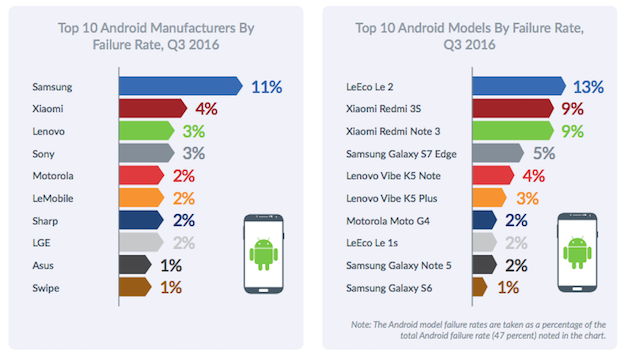 As for the types of issues affecting Android handsets, one could reasonably argue that they’re more serious than the types of failures affecting iOS devices. To this point, the most common points of failure for Android devices involved USB issues, carrier signal issues, camera problems and battery charging difficulties and screen abnormalities.