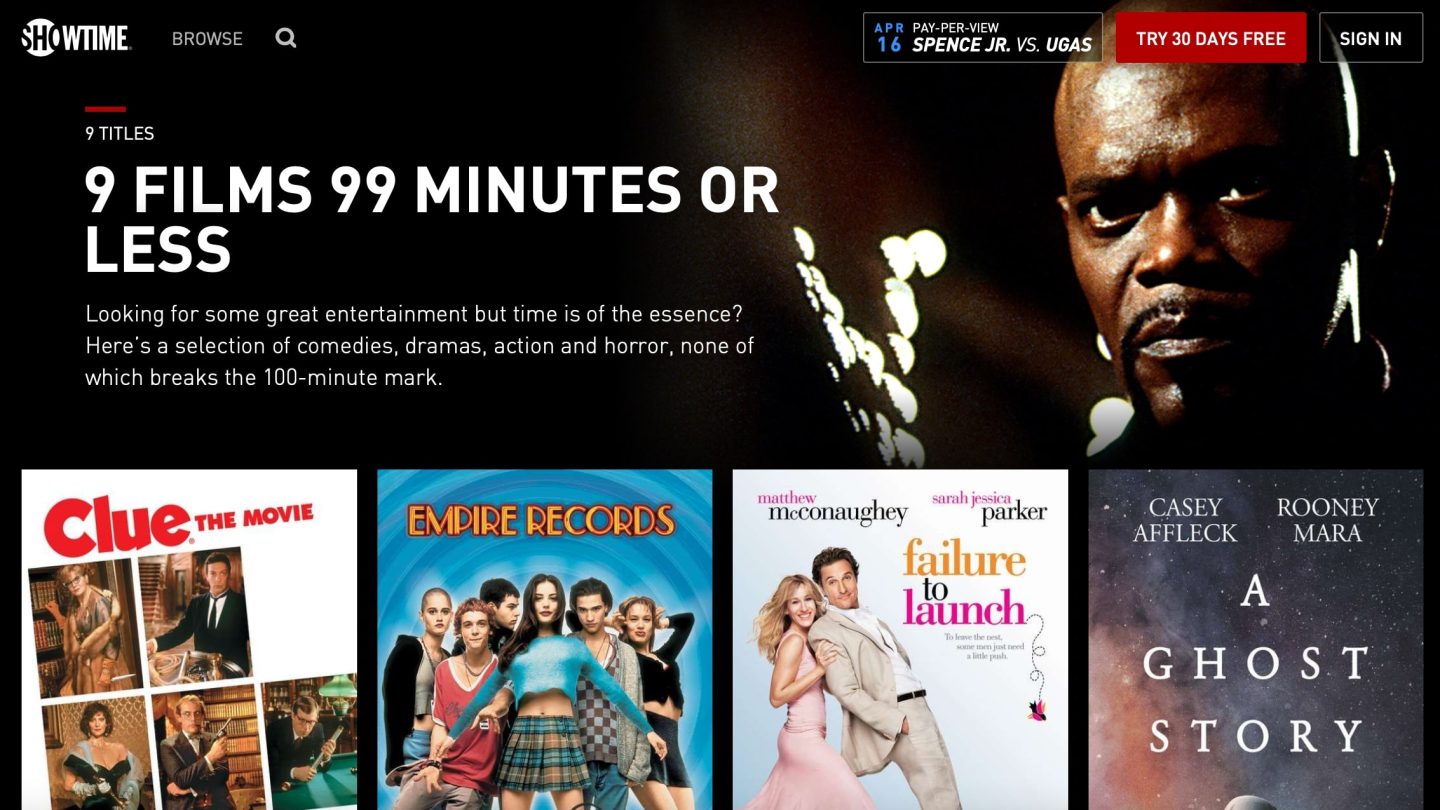 These days, Pete Davidson lamented during a hilarious Saturday Night Live musical sketch over the weekend, he can find almost anything when he’s looking for what to watch next from his favorite streaming services. With one glaring exception. And that would be, as the title of the rap he performed with Gunna makes clear, a “short-a** movie” of no more than 90 minutes or so in length.

Right before I click what he wants to watch, Davidson raps, he looks down below the line (“and that’s when I see the run time,” he laments, as he squints at the TV screen in dismay).

Whatever you want to say about Netflix and Showtime, it must be acknowledged that people who work there at least have a sense of humor. On Monday, both services responded to the SNL rap — which clearly must have touched a chord — by directing viewers to special pages consisting of nothing but the aforementioned “short-a** movies.”

If what you want to watch on Showtime is something that doesn’t approach the 2+ hour runtime so common in cinemas today? Then Showtime has got a special page just for you.

“Looking for some great entertainment but time is of the essence?” Showtime wrote on its category page, which it linked to in the tweet above. “Here’s a selection of comedies, dramas, action, and horror, none of which breaks the 100-minute mark.”

Netflix did the same thing as Showtime, only Netflix actually whipped up a category page that went so far as to borrow the exact phrase from the SNL rap.

The link to Netflix’s page, which you can find in the tweet below, will take you to a list of “short-a** movies” on the streamer. That page includes titles like Rescued by Ruby, which has been a Top 10 movie on Netflix in the US for several days now. Plus other Netflix originals like The Weekend Away, and Brazen.

Things have gotten so bad in terms of movie runtimes that The Guardian recently ran a piece calling for the return of the intermission to cinemas. So that blockbusters don’t have to also be bladder-busters. The biggest offenders along these lines at the cinema nearest to my apartment are the ones you might expect. Superhero titles, like The Batman and Spider-Man: No Way Home. They clock in at 176 minutes and 150 minutes, respectively.

Egregious runtimes like those are precisely why that SNL rap was so spot-on.

“While I don’t think it duplicates the experience in the theater, it is good enough. And when you consider what you have to do to go to a theater, which is drive there or commute there in some form and pay for transportation, parking, etc., sit in a large room with a lot of people, to some there’s friction involved and it’s just not worth it.”