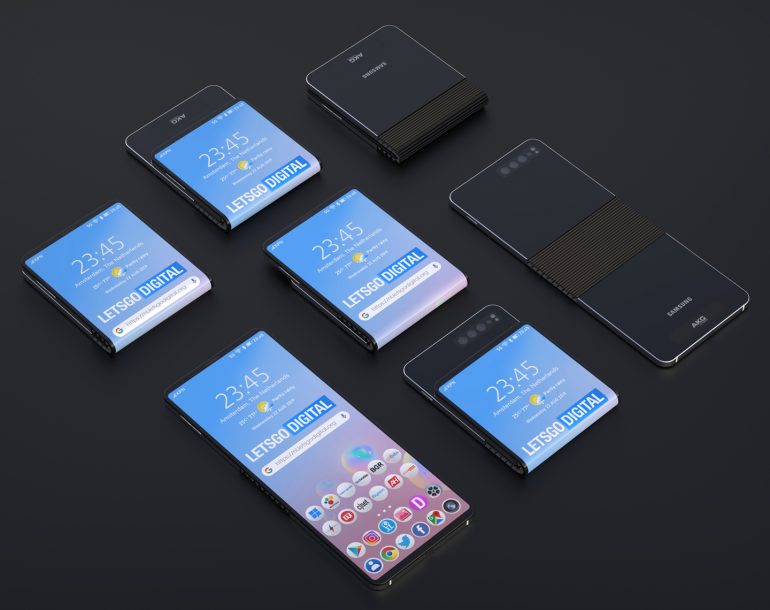 For those of you waiting for Samsung to finally make good on its promise as of a few weeks ago that its embarrassing Galaxy Fold design flubs have been fixed and that the phone will finally be released in September — well, keep waiting. We still don’t have a hard date for that release, and yet Samsung has nevertheless stayed busy behind the scenes cranking out designs for all kinds of new foldable phones that may or may not actually ever see the light of day.

On the heels of getting word that Motorola’s foldable Razr — based on the phone maker’s iconic series of clamshell phones — should be out by the end of this year, a newly published Samsung patent for a foldable phone with a clamshell design has just been spotted.

The patent was published on August 8 in the World Intellectual Property Office database (h/t LetsGoDigital) and we should note right off the bat that we’ve known for a few months now Samsung has been toiling away on a few foldable designs separate from the ill-fated Galaxy Fold. We mentioned that in an earlier post here, going so far as to wonder whether the clamshell foldable we’d heard was in the works might eventually be positioned as the Galaxy Fold 2.

Now, thanks to Dutch tech news site LetsGoDigital, we can not only get a look at Samsung’s design via the patent documentation below — the site also prepared color renderings that you can check out above.

Designs presented in patent applications like this one are often more aspirational than practical, so who knows if Samsung will ever put this particular design into production. Remember, the Galaxy Fold initial launch turned into an utter mess, and Samsung’s second attempt at the release still hasn’t happened yet (it’s supposedly coming in September, exact date TBD), but it is important to remember that foldable phones do seem to be a definite part of the company’s long-term product roadmap.

In terms of this new design, the handset sports an elongated screen — necessary, of course, to allow the device to be folded along an extra-wide hinge that can be bent in more than one place. Check out the sketches above to see what we mean. You can close the phone so that both ends touch equally, or you can close the phone to the degree that part of one side sticks out more than the other.

The design also envisions the user being able to fold the device such that the screen could be on either the inside or outside, depending on preference.

To be fair, Samsung is not the only manufacturer that has seen its optimistic forecast about a foldable phone release have to be re-thought recently. Huawei, as we and others have reported in recent days, has likewise delayed the launch of the Mate X. We’ll see if Samsung sticks to its new release timetable of September for the launch, finally, of the Galaxy Fold — which has enjoyed quite a bumpy ride so far, to say the least.