There aren’t many items that depreciate in value quite like a car. Indeed, there’s an old rule of thumb which holds that a car will lose nearly 10% of its value the moment you drive it off the lot. While that might be a slight exaggeration, there is a kernel of truth to that old adage.

Tesla vehicles, like any other cars, are certainly prone to depreciation, but a number of studies in recent years have found that Tesla vehicles tend to retain more relative value than similarly priced luxury cars. Late last year, for instance, an Autolist study revealed that a Model S with 50,000 miles on it will see its value go down by 27% whereas a Mercedes S Class with 50,000 miles on it will experience a 33% drop in value.

In light of that, a new study from iSeeCars reveals that used Tesla vehicles, in addition to holding more resale value than similar cars, also tend to be sold much more quickly.

The study specifically found that a used Model S will remain on the market for bout 35.5 days before being sold. In contrast, rival luxury sedans from the likes of Audi and BMW remain on the market for upwards of 48 days. It’s worth noting that there are likely two dynamics in play here. One, it’s entirely possible that demand for Tesla simply outpaces demand for cars like the Audi A8 or Porsche Panamera, the latter of which typically remains on the market for 60 days before being sold. Two, it’s also possible that used Tesla’s move quicker simply because supply is lower, thus prompting prospective buyers to act with a greater sense of urgency.

Either way, the chart below is quite telling and should be reassuring for any current or prospective Tesla owner worried about the resale value of a Model S. 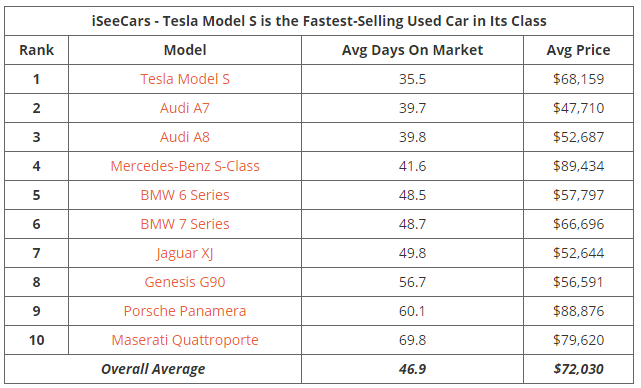 You’ll also note that the average selling price of the Model S, while seemingly high, is relatively lower than for other vehicles.

The average sale price of a used Tesla Model S is $68,159, which makes it the fourth most expensive vehicle among other large luxury cars. However, among its comparable vehicles, it is also the second most likely to be deeply discounted, behind only the Jaguar XJ. “Nearly 20 percent of used Model S cars are discounted by at least 10 percent below market value, which is almost one and a half times more often than the average for comparable models,” noted [iSeeCars CEO Phong] Ly. “While the supply for used Teslas is still relatively low, it has been growing steadily as more vehicles come off lease, which could cause dealers to be more competitive with their pricing. These significant deals likely contribute to their fast selling time.”