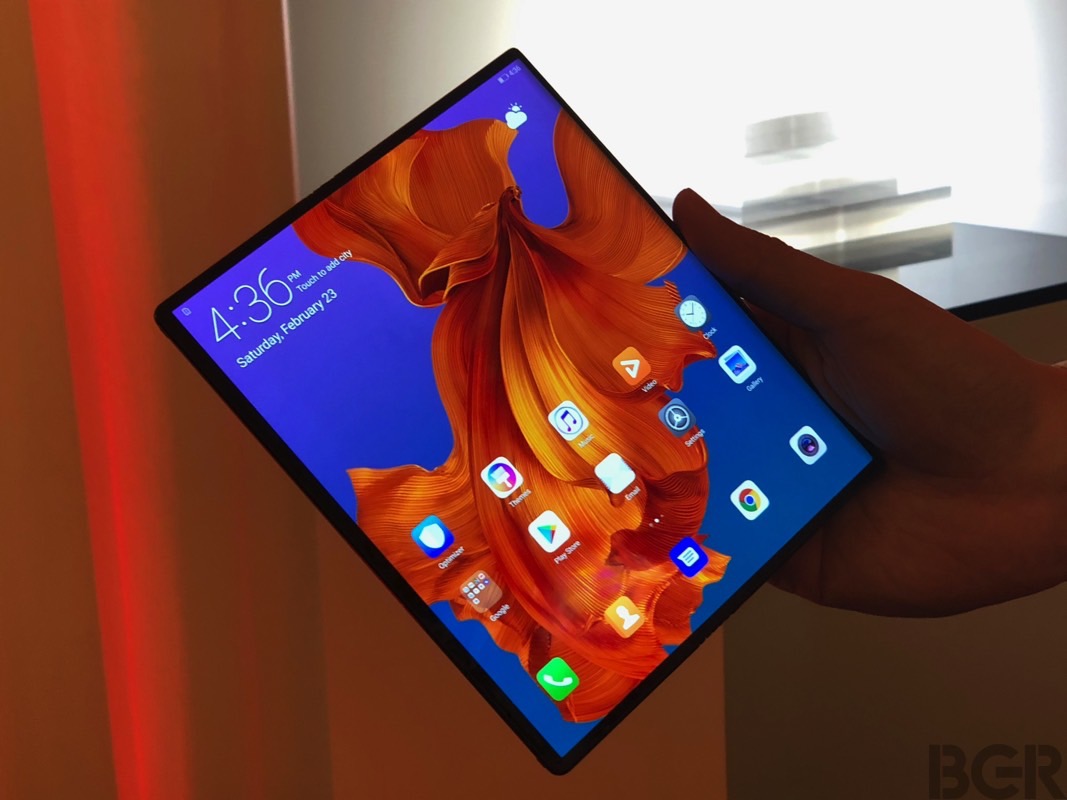 In the weeks that preceded MWC 2019, Huawei teased that it would unveil a foldable phone at the show. Then with a couple of days to go until Huawei’s press event, that device leaked. Well, that leaked device is very real, it’s gorgeous, and it also happens to be Huawei’s first 5G smartphone. Unfortunately I only got to see the new Mate X from a distance, because the media wasn’t allowed to handle the prototypes that Huawei had on hand at the show.

If you liked Samsung’s Galaxy Fold, then you’ll just love the Mate X. Unlike Samsung’s phone, the foldable screen of the Mate X is placed on the outside of the phone, and the entire package just looks a lot better than the Fold.

Huawei said in a briefing ahead of its press conference on Sunday that the 6.6-inch screen is actually usable, a definite hit at the Galaxy Fold’s much smaller external display. The Chinese giant also took a subtle dig at the Galaxy Fold’s strange notch on the foldable display, suggesting that the Mate X’s main screen doesn’t compromise.

The Mate X is also extremely thin when unfolded, with each of the two sides measuring just 5.4mm thick, which is 0.5mm thinner than the iPad Pro. When folded, the phone does become thicker than any normal smartphone, measuring 11mm. The main OLED screen curves along a unique Falcon Wing hinge, although I have no idea what it feels like since the press wasn’t allowed to touch it.

The main problem of a foldable phone with a massive screen on the outside is, well, the massive screen on the outside. Now your chances of breaking it have doubled, but Huawei plans to create a special, albeit weird-looking, protective case for the phone that will act as a protector for the smaller 6.38-inch screen, while allowing you to use the 6.6-inch display just as a regular smartphone.

Other features include a fingerprint sensor that’s built right into the power button on the side, as well as a thicker bar on the left side which acts both as a handle for the device when held in tablet mode, but also as a housing for the triple- or quad-lens Leica-branded camera.

What’s great about this particular foldable phone is that the camera acts both as the front and rear camera, depending on what you need from it. Moreover, because the screen is so big, the selfie mode will let you preview images in real time, or allow the subject of your photos to see what you’ve just captured.

When it comes to specs, the Mate X packs the same Kirin 980 that powers the Mate 20 series, as well as the recently launched Balong 5000 5G chip. Huawei said during the presentation that its 5G tech would deliver sub-6G speeds, which in theory will be twice as fast as Qualcomm’s chips. Real-life 5G speeds will depend on coverage, of course.

One other interesting feature that you’ll find on the Mate X series is incredibly fast wired charging. The Mate X’s 4,500 mAh battery will fill from 0% to 85% in just 30 minutes, as the phone supports 55W charging. There was no mention of wireless charging, but you probably don’t even need to worry about that considering how fast wired charging will be.

What I didn’t get to see during the presentation was a thorough demo of the user interface, although Huawei did say the phone will run two apps side-by-side on the screen.

The Mate X will cost €2,299 when it launches this summer. You get 8GB of RAM, 512GB of storage, and all that amazing foldable tech for all that money. Sadly, the phone likely won’t be widely available in the US because of the issues between the current administration and China.