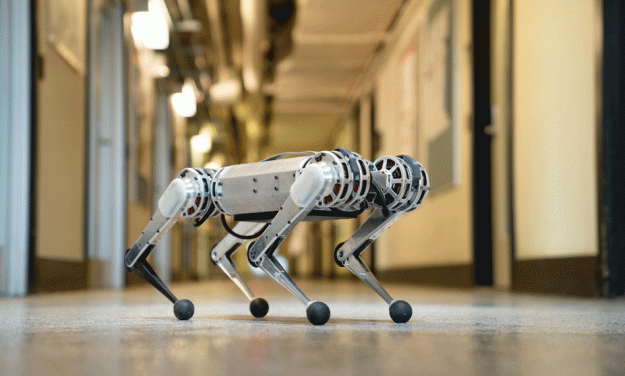 Researchers at the Massachusetts Institute of Technology describe the new robot they just built and unveiled as “powerful, robust and inexpensive.” Among its abilities, the robot can run, walk and (sigh) execute a perfect backflip upon command. This is either an impressive display of mechanical engineering prowess or a worrisome development, depending on your point of view.

This is also the first time a four-legged robot has been built with the ability to backflip, which you can see occur in the clip above. The robot crouches down a bit, then shoves itself into the air.

Though it’s the first four-legged robot to be able to do this, it’s not actually the first robot, period, that’s been able to backflip. Remember the viral videos associated with Boston Dynamics’ Atlas robot? It’s a two-legged robot that was shown being able to backflip, among an assortment of other scary feats. This new 20-pound robot from MIT, meanwhile, is able to bend and swing in the air thanks to power it draws from a dozen electric motors — three motors each for the four individual legs. Those motors give the robot three degrees of freedom and a significant range of motion, and the lightweight design allows the robot — which MIT is calling its Mini Cheetah — to pull of fast maneuvers and make “high-force impacts on the ground” without breaking any of its component parts.

Long story short, this is a robot that weighs less than some Thanksgiving turkeys and which the researchers say is near-indestructible thanks to its ability to take a fall and quickly right itself.

Lead developer Benjamin Katz, a technical associate in MIT’s Department of Mechanical Engineering, explained in a news release that the rate at which the robot can change forces on the ground is also really fast. When it’s running, for example, the robot’s feet are only on the ground for around 150 milliseconds at a time, “during which a computer tells it to increase the force on the foot, then change it to balance, and then decrease that force really fast to lift up.”

“Eventually, I’m hoping we could have a robotic dog race through an obstacle course, where each team controls a mini cheetah with different algorithms, and we can see which strategy is more effective,” said Sangbae Kim, an associate professor of mechanical engineering at MIT and in whose lab Katz worked. “That’s how you accelerate research.”