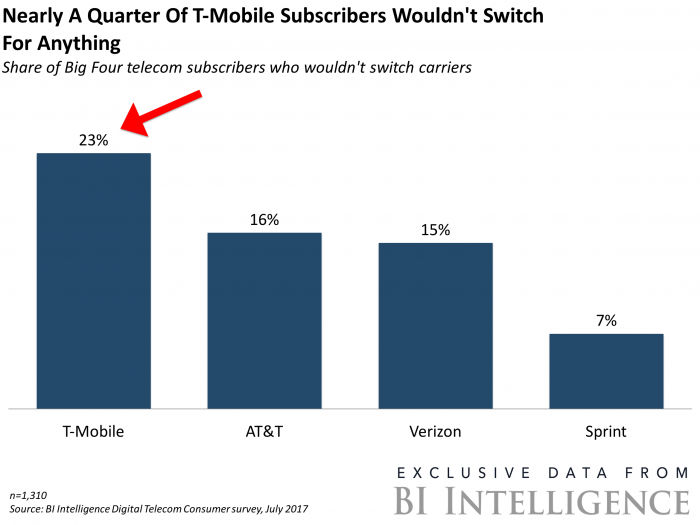 T-Mobile has made a big deal these past few years of being the “Un-Carrier.” Led by outspoken CEO John Legere, it simplified plans, removed extra taxes and overage fees, and shifted away from the old buy-a-subsidized-device-on-two-year-contract plan.

Underlying all of the efforts was the need to change how customers perceive their carriers. Telecoms companies, including wireless, are generally hated by customers, and T-Mobile figured that if it could change that, a lot of other things would fall into place.

Measuring satisfaction with a mobile network is notoriously difficult, but the simple question about what it would take to get you to switch is telling. It’s possibly the thing that wireless companies care about most: postpaid “churn,” or the percentage of customers switching every quarter, is a metric that analysts rely on heavily to predict future earnings. T-Mobile posted a record-low churn in Q1 this year, so the numbers add up with BI‘s survey.

The customer loyalty is even more important for T-Mobile in the current marketplace. Thanks largely to T-Mobile’s own push to simplify plans and offer unlimited data, the wireless industry right now is more competitive than it’s ever been. All four wireless carriers offer relatively cheap unlimited data plans with no contract, which makes it easy to jump ship from one provider to the other.

T-Mobile’s financial success is good for the network long-term, as well. With enough subscribers onboard, T-Mobile has the money and motivation to bring its network up to scratch compared to Verizon and AT&T. That’s exactly what it’s doing: it paid $8 billion for valuable new spectrum earlier this year, and is moving crazy fast to build out a 600MHz LTE network that should offer coverage comparable to Verizon. It’s also investing in LTE-Advanced technologies and building thousands of small cell sites to help with capacity on the network.

It can do all this because of the faith that there’s going to be customers at the end who’ll want to pay for the network. Sprint, by comparison, has oodles of spectrum sitting around, but no money, which is why its network sucks. It’s essentially a circle of poverty: the network is bad, so no-one signs up, which means Sprint can’t reinvest anything in making its network better.

Now, everything is rosy at the moment, but we can’t put up a “job well done” sign and move on to fixing broadband quite yet. The Uncarrier, for all its customer-friendly moves, still pulls old tricks like adding unnecessary fees for new lines, uses questionable sales tactics to sell customers things they don’t need, and pushes two-year phone “Equipment Installment Plans” as a replacement for the old two-year contracts.

There’s also the problem of Sprint. Right now, Sprint plays a vital role in the marketplace of keeping downwards pricing pressure on the other carriers, thanks to its dirt-cheap unlimited plan. But Sprint’s owner wants to sell or merge the company, and there’s a danger that it could merge with T-Mobile, or be absorbed by an ISP like Charter or Comcast. If that happens, Sprint’s price pressure will be gone, and there’ll be nothing stopping the remaining three carriers from slowly raising prices to over $100 per line.

In short: competition is doing exactly what it should be doing to make T-Mobile better, and customers are rewarding it with some serious loyalty. But don’t be fooled into thinking T-Mobile is doing this out of some sense of corporate benevolence. It’s just good business practice, and that won’t last forever.