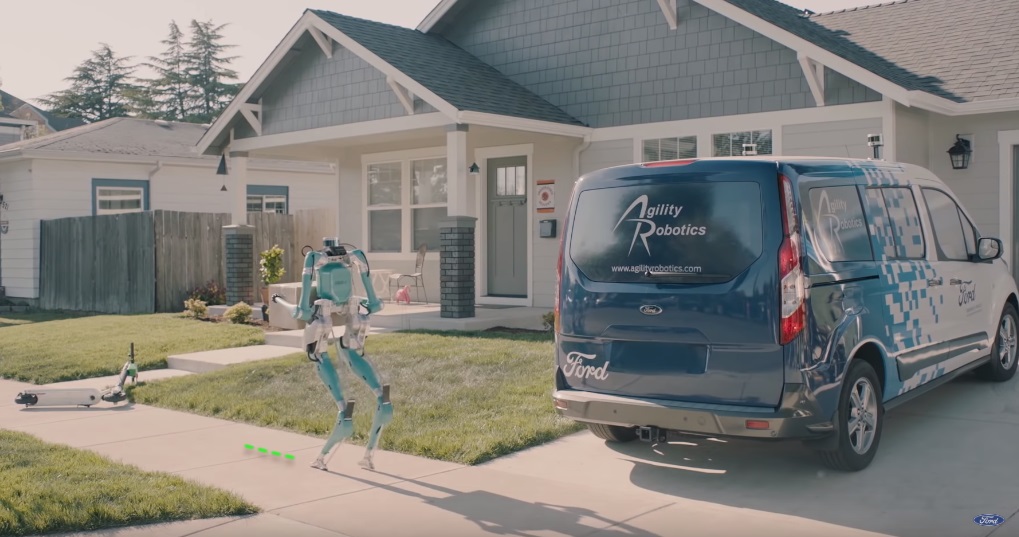 Over the past few months, Ford and Agility Robotics have been working on a new initiative designed to assess how intelligent robots and self-driving cars can work in unison to more efficiently deliver items like groceries, packages, and even pizza, straight to your door. The impetus behind the idea certainly makes sense insofar that a self-driving can only bring an ordered item to a nearby curb. And sure, a human could come out and pick up a given package, but why expend any energy at all when an advanced robot can literally do all the heavy lifting for you?

The idea seems to straddle the line between futuristic and creepy, but that’s just par for the course whenever we’re talking about advanced robotics.

As envisioned by Ford, a self-driving car would pull up to a specified house whereupon a robot would climb out of the back, pick up the package in question, and then bring it right to the front door.

Designed by Agility Robotics, the robot is called Digit and can eerily mimic the gait of a human and can even go up and down stairs. What’s more, Ford CTO Ken Washington notes on Medium that Digit can “walk naturally through uneven terrain, and even react to things like being bumped without losing its balance and falling over.” As far as getting around is concerned, Digit is outfitted with LiDAR and a suite of other sensors. Strength wise, Digit can lift packages that weigh as much as 40 pounds.

What’s particularly interesting about the venture is that self-driving cars of the future may serve dual purposes simultaneously, with Washington noting the following:

Since self-driving vehicles can potentially move people and goods simultaneously, they hold great potential to make deliveries even more convenient and efficient. A ride-hailing trip could double as a delivery service, dropping off packages in between transporting passengers.

A video demo of Digit in action can be seen below. It’s interesting to note that the video illustrates how Digit manages to identify an obstacle — in this case a scooter — and come up with a new path in real-time.