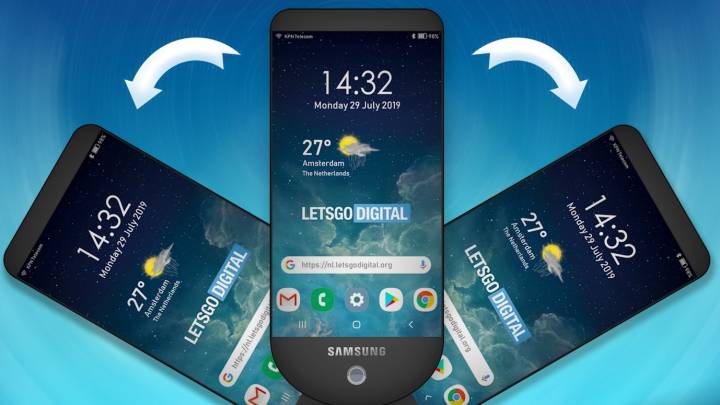 One of the recurring knocks you keep hearing against Apple is that the iPhone maker keeps doing variations on the same things it’s done before, at least when it comes to hardware. The smartphones, for example, are all variants of the same idea — rectangular slabs of glass, never any adventurous design leaps … yadda, yadda. Say what you will about Samsung, meanwhile, but it’s much harder to criticize the South Korea-based handset manufacturer over boring sameness. Case in point: A newly discovered patent for a smartphone design like nothing you’ve seen before, which probably won’t even be a commercial product and something you can actually buy anytime soon but which nevertheless speaks to a continued spirit of willingness to try bizarre, even outlandish things inside the company.

This time around, Samsung has given us a concept design for a handset that includes three screens — the main screen and then two others that sort of unfold like a fan.

The 10 sketches included in the patent documentation for which Samsung Display made a formal application in August 2018 at the Korean Intellectual Property Office (h/t LetsGoDigital) show a rounded bottom and three equal display parts, all stored beneath each other.

As you can see in the color rendering above, as well as the sketch below, you swing two of the displays outward:

This, of course, follows other Samsung creations and designs that are similarly — adventurous, shall we say. We’re talking about everything from the company’s foldable smartphone to handsets with bendable and even roll-up displays. Plus things like Samsung smartwatch concept designs with screens that expand, and much more.

Each time, then as now, the question is begged — is there any degree of practicality here? With something like this new concept, what in the world would the user experience look like, given that there are three separate, distinct screens? As we’ve said before, probably one of the few things that can objectively be deduced from a design like this is that while this specific idea won’t show up in the wild anytime soon, there very much is an interest among many handset manufacturers to break the mold. We may not be getting a device like this anytime soon, but manufacturers like Samsung are nevertheless trying, bit by bit, to steer us incrementally away from an expectation that phones still look like the same rectangular slabs both now and in the future.