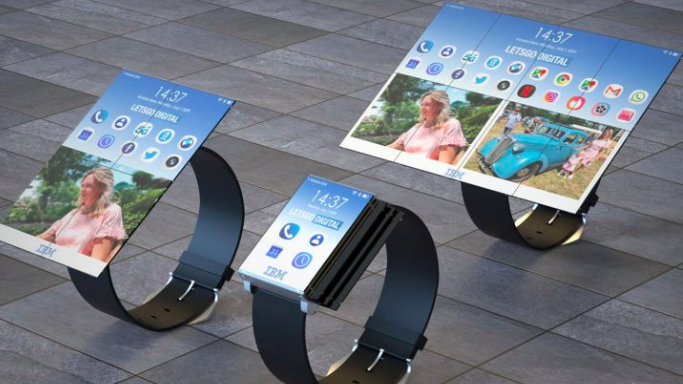 The first thing I thought of when looking at this new smartwatch design patent from IBM, after noting that the watch display expands to become a smartphone on your wrist — and expands again, if needed, to the size of a tablet strapped to your wrist — was that it looks like something out of a sci-fi movie. Also, that this device must surely be at least as fragile as Samsung’s once-easily breakable Galaxy Fold.

At any rate, IBM’s newly issued patent for this multi-function smartwatch is nothing if not ambitious. The tech giant applied for the patent three years ago, according to a new report from Dutch tech news site LetsGoDigital (which also prepared the color renderings you see in this post), and it was published last month in the US Patent and Trademark Office database. You can view the full patent here, but we’ll go ahead and offer a brief summary of what it entails:

In its smallest iteration, the device looks like an apparently normal smartwatch — albeit with a slightly thicker body and no real edges on the display to speak of. But here’s where the design is unlike anything you’ve seen before. Under the main screen, seven auxiliary screen parts are housed and hidden from view. All eight measure 2 x 3 inches each. If you pull enough out to be the size of a smartphone, you’ve then got a 4 x 6-inch panel on your wrist.

There are, it should go without saying, a ton of unanswered questions about the device, not the least of which involve how the user interface would adjust to switching between the various display sizes. But also whether IBM — better known at least to laymen for its personal computers — ever intends to actually commercialize a device of this kind.

It certainly wouldn’t be the company’s first rodeo when it comes to smartwatches. IBM unveiled a smartwatch prototype back in 2000 that ran on the Linux OS a full four years before Android War OS was officially a thing, and well in advance of there being a robust market demand for smartwatches. It’s interesting to see Big Blue jump into the fray with a design as radical as this, after the scores of headlines we and others have published about Samsung producing some of the strangest, wackiest and definitely most radical designs lately, albeit mostly for phones and tablets. Indeed, as we’ve said on a number of occasions now, bizarre new consumer electronics designs seem to be the order of the day going forward — the stranger, the better.