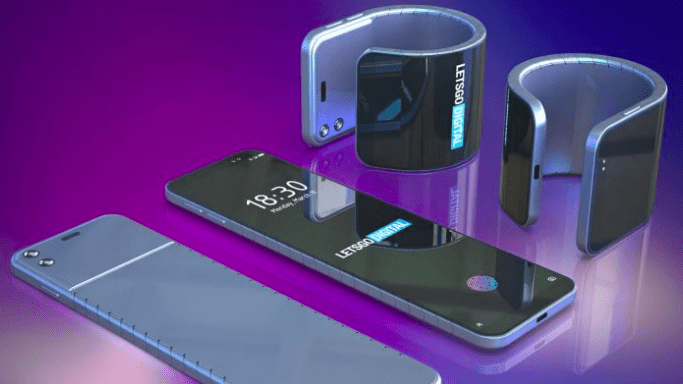 Every day, it seems, we learn new details about yet another experimental smartphone concept to emerge out of Samsung, and today is no different. Because it seems the South Korea-based smartphone giant is about to take its foldable phone ambitions to a whole new level, as the company seems to have an interest in bendable phone displays. Specifically, in displays that can be worn around the wrist — in effect, allowing a smartphone to double as a smartwatch alternative.

A patent Samsung filed along these lines last year with the World Intellectual Property Organization was published a few days and depicts this very thing, a phone with an elongated display that can also curl in one direction.

The patent was spotted by Dutch tech blog LetsGoDigital, and this image gives you a good idea of the concept that’s envisioned here:

In terms of the elements of the design, they include a lock to prevent the phone from automatically rolling up once it’s been unfurled. The patent shows a narrow slider on the back of the device that can be easily operated with one finger. You just press down to use the smartphone in the unfolded position which will keep it from automatically bending back into the curved shape.

According to the patent filing, both ends of the smartphone are also fitted with magnets that attract each other to help the phone keep its shape when curved. A camera is depicted on one side of the sliding mechanism, and space is also seen at the bottom for a connection that will presumably charge the device.

Meanwhile, per LetsGoDigital, the back of the phone is fitted with a flexible elastic plate made of stainless steel, and the inclusion of a number of small links give the phone its ability to bend.

While this concept is certainly an interesting one, to say the least, it should that Samsung is not the first smartphone maker to signal an interest in giving this kind of design a try. Lenovo, back in 2016, showed off its own take on the same idea here of a phone that can bend and be worn around the wrist. Meanwhile, Chinese electronics brand TCL is apparently likewise working on one of these wrist-worn phones as well, as ZDNet reported in February.

Hard to say if we’ll see a smartphone design like this actually come to fruition anytime soon from Samsung, given the lack of a guarantee that patent documents represent. Many times, patents like this are indicators of nothing more than experimentation, which has certainly been the order of the day at Samsung lately when it comes to smartphones the company has planned.

Check out our post from Monday walking through some of the handsets that are teed up for release soon from Samsung, starting with next month’s Galaxy Fold device.