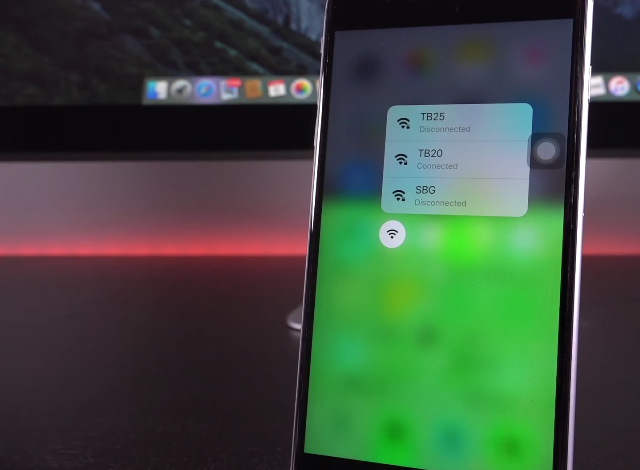 Any iPhone 6s and iPhone 6s Plus user who’s using 3D Touch on a regular basis will tell you that the handy feature is more than a gimmick. 3D Touch lets you preview items in email, browsers and chats without opening them, and it also adds quick shortcuts to certain app features directly on the screen to make them accessible from the app’s icon.

But Apple could expand the reach of 3D Touch in the future, as soon as more iPhones and iPads are ready to support it – the feature requires hardware components to sense pressure differences in touch and provide haptic feedback. One unofficial app called QuickCenter shows how Apple could make 3D Touch even more useful by tweaking one critical feature of iOS.

So what does QuickCenter do? Well, in addition to being able to quickly toggle on and off certain iPhone features, control music, and quick launch certain apps like you would on any regular Control Center version, Quick Center takes advantage of 3D Touch to enhance the functionality of the pull-up drawer.

A 3D Touch press on the Wi-Fi toggle will let you connect to any chosen Wi-Fi network or to a Bluetooth device. 3D Touch gestures work with the Time and Camera shortcuts apps and will let you quickly enable an alarm and snap a picture straight from Control Center.

The feature will be available from the Cydia store for $1, and you’ll have to own an iPhone 6s or iPhone 6s Plus running a jailbroken version of iOS 9.2.1 for it to work in full. The unofficial app will also work on non-3D-Touch devices, but the experience is a little different.

The app will not be making its way to the App Store anytime soon, as it customizes one area of iOS that Apple has not opened to developers. However, Apple should use it for iOS 10 inspiration as iPhone power users would certainly appreciate 3D Touch-based tweaks for Control Center.

A video demoing QuickCenter follows below, via iCrackUriDevice.