Just three weeks after releasing iOS 12, Apple’s latest mobile OS is already running on the majority of iPhones and iPads. According to data made available on Apple’s developer page, 53% of all iOS devices introduced over the last four years are now running the most recent iteration of iOS. When the data set is expanded to include iOS devices that were released before 2014, that adoption rate still stands at a respectable 50%.

The numbers become even more impressive when we take iOS 11 into account. As evidenced by the image below, 40% of iOS users on recent devices are still running iOS 11. When looking at the cumulative number of iOS devices, iOS 11 usage checks in at 39%. In short, 89% of all iOS devices are currently running an iteration of iOS that, at the most, is about 1-year-old. 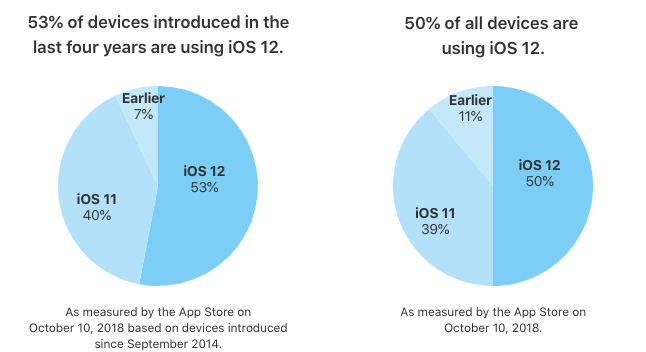 The iOS figures above are all the more impressive when we take a look at what’s going on over on the Android side. Per the Android developer dashboard, a tad more than 50% of all Android devices are still running Android 6.0 Marshmallow or a pervious version. Put differently, the majority of Android devices are running a mobile OS that is at least 3 years old. Overall, the rate of Android adoption has seemingly gotten better in recent years, but it still pales in comparison to a new iOS release.