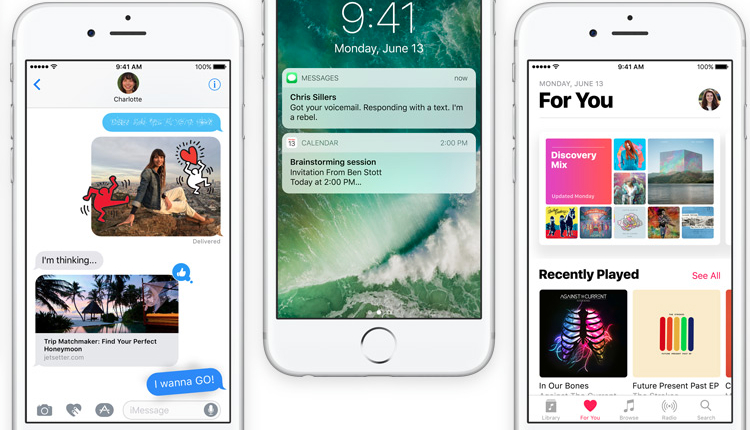 iOS 10 is one of Apple’s most important software updates in recent years. There are many new features under the hood, with iMessages, Siri and Apple Maps standing out. But Apple also brought plenty of new tricks to its mobile OS, including features some people will immediately call out as being “stolen” from Android – here’s a list of nine new iOS 10 features Apple borrowed from Android and another four that are too close to call.

Additionally, Apple also “swiped” features from third-party app developers and included them in the version of iOS 10 that it demoed on stage on Monday. In this post, we’ll show you nine new iOS 10 features that were previously available in third-party apps.

You can now use 3D Touch on the app shortcuts in the Control Center to access certain features within those apps. Third-party apps have not been able to offer similar features because Apple wouldn’t allow developers to mess with 3D Touch or the Control Center. But concept videos and jailbreak solutions (QuickCenter) have already shown this kind of functionality.

Apple Maps now remembers where you parked your vehicle. That’s a very useful feature as we often forget where we park our cars. However, many others solved this problem before, with plenty of iOS apps letting you mark down a certain location and then make your way back to it using a maps app. Track Back is one such app, but there are dozens more.

Apple’s health app now includes a sleep analysis feature that lets you better manage your sleep. However, it doesn’t offer advanced sleep analysis and it doesn’t optimize your wake up time like some popular apps do, or at least not in this version of the app. Sleep Cycle is a much better choice until then.

The new Home app will finally let you take advantage of Apple’s HomeKit functionality. The application doesn’t copy a specific third-party app but does include functionality that’s already included in third-party smart home apps from accessory makers who sell Homekit-compatible hardware. But rather than needing an app for each different Homekit device or a third-party hub app, you’ll be better off using the Home app.

iOS 10’s accessibility settings include a neat feature called Magnifier, one that Apple didn’t talk about on the stage. It lets you use the camera to magnify printed text so things are easier to read. Existing third-party apps do the exact same thing — Magnificent is one of them.

One of the coolest tricks in iOS 10 and macOS Sierra is a universal copy-and-paste Continuity feature. With Universal Clipboard, you’ll be able to copy text or images on one device and paste them on a different one. The same functionality exists today via third-party apps like PushBullet.

Unlocking the Mac with biometrics

There are iPhone apps (like KeyTouch) that let you unlock the Mac with the help of the Touch ID fingerprint sensor on the iPhone. Apple has somewhat copied this functionality in iOS 10 by letting users unlock the MacBook without entering a password, as long as they’re wearing an Apple Watch.

iMessage has received a major upgrade in iOS 10 and the Messages application now includes a slew of new features. Some of them will remind you instantly of Snapchat functionality, especially when it comes to sharing and editing pictures and Live Photos.

iMessage also comes with a third-party app store for iMessage apps. Facebook’s Messenger offers similar functionality that lets you add all sorts of third-party stickers, emoji and other tricks to your messaging experience. Plenty of other popular messaging apps offer the same thing as well.