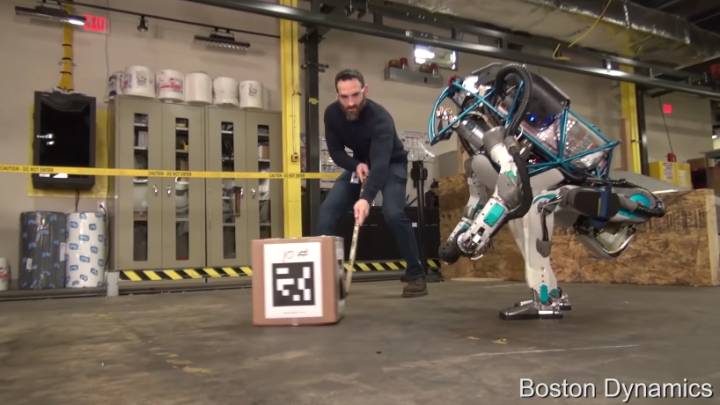 Google’s recent videos show a dog-like robot playing with a real dog, and also a humanoid model called Atlas that can do a bunch of interesting things. The robot walks on two feet regardless of terrain, it opens doors, and it can pick up objects that weigh up to 10 pounds.

The best part of Google’s video is that the robot relentlessly tries to accomplish its tasks, regardless of any distractions and obstacles, including bullying from human testers. It’s even able to pick itself up from the ground when knocked over by nasty humans.

But what if the robot somehow fights back against the bullies?

That’s what a hilarious recut of Google’s original video proposes. There aren’t any special effects in Auralnauts clip that’s going viral on YouTube. Instead, we have a voice over conversation that imagines a chat between Boston Dynamics employees testing the robot and the machine, which is clearly smitten with that 10-pound box.

The result is hilarious, but it’s also very, very creepy, as it imagines what an AI-powered machine could do if it decided to fight back against bullying. Check out the full clip, which is embedded below.