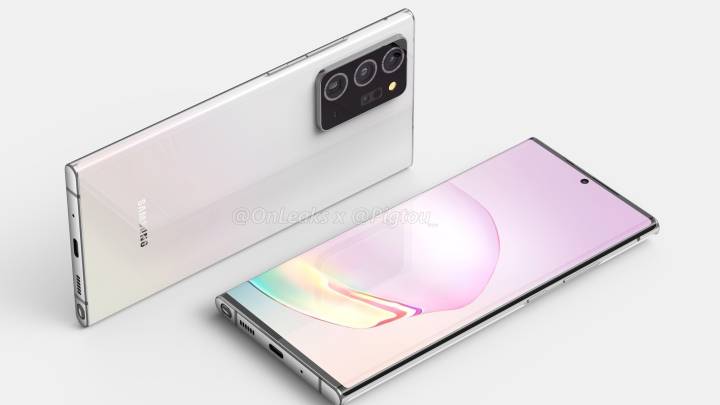 By all accounts, the Galaxy S20 series hasn’t exactly been breaking sales records since it launched earlier this year. Part of that can undoubtedly be blamed on the viral pandemic that interrupted the economies of every country on the planet, but the lack of major upgrades and the baffling decision not to release a more affordable Galaxy S20e model played a part as well. This puts even more pressure on the impending release of the Galaxy Note 20.

Last week, David Kowalski and Pigtou teamed up to give us our best look yet at what might be the final design of the Galaxy Note 20. The renders were said to be based on leaked CAD drawings, and showcased some of the ways that the design had changed when compared to the Galaxy Note 10. Now, a few days later, Pigtou is back with renders of the Galaxy Note 20+, but this time, Steve Hemmerstoffer (@OnLeaks) is behind them.

According to Pigtou, the Galaxy Note 20+ is 165mm long, 77.2mm wide, and 7.6mm thick, making it thinner than the Galaxy Note 20 described in last week’s leak. Much like the Note 20, the design of the Note 20+ should be familiar to anyone who owned a Note 10 or Note 10+, though the S Pen slot and the physical buttons have swapped sides. The front-facing camera looks virtually identical in both size and relative positioning.

As with the Galaxy Note 20, the most notable design change on the Note 20+ is the rear camera module, which is said to have a periscope lens and a depth camera. Rumors have suggested that the Note 20+ might have a 108-megapixel camera, but this specific leak doesn’t provide any insight into the specifications.

Both the Galaxy Note 20 and the Galaxy Note 20+ are expected to be announced in August at a digital Unpacked event. Of course, there’s a chance that Samsung’s plans could change as a result of the pandemic, but all signs are pointing to these oversized flagships launching on schedule, at least for now.