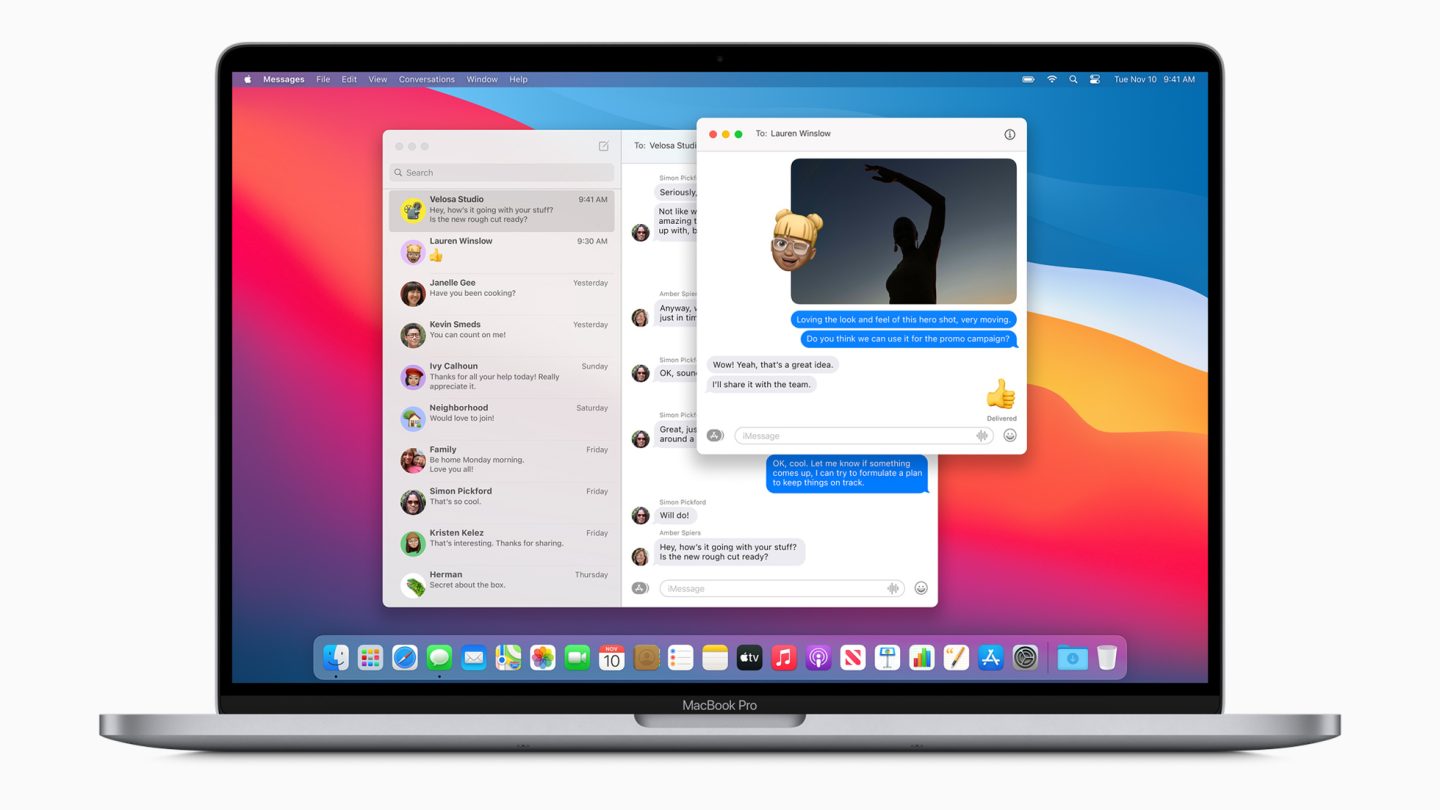 The Apple Messages app over the years has become a fun, full-featured, and increasingly useful place where I spend a lot of time during sessions on my phone or with my MacBook Air. I’ve got an open game of “Cup Pong” going with a friend via the Messages app right now, in fact, as well as endless stickers- and GIF-laden texts from friends, Uber and Postmates drivers, colleagues — as well as businesses, which may actually be my favorite use case for any messaging app, let alone the messaging app that comes standard with Apple products like iPhones and MacBooks.

Recent days have seen Apple bring a ton of improvements to Messages, thanks in part to the arrival of macOS Big Sur and iOS 14. The latest versions of Apple’s desktop and mobile operating systems brought new features for Messages users that include the ability to pin conversations to the top of the list of chats within the Messages app. This is one more example of how the whole experience of using the app has stayed relatively smooth and fast over time, with Apple adding even more usability along the way — which is why it pains me to acknowledge that, still for too many message use cases, I find myself needing to fall back on an alternative like Facebook’s own Messenger app.

The reason has to do with Apple’s biggest weak spot regarding the Messages app, in my opinion. If you need to send a quick text to a business, Facebook’s app is far superior — blows Apple away, in fact, in this regard.

However, if Apple makes some big improvements in this regard, I also think Facebook’s messaging app could subsequently be in serious trouble. The shoe on the other foot, as it were. Here’s why.

Right now, a minuscule fraction of all the businesses in the US are set up to allow you to chat with them directly via the Messages app. Exceptions include brands like Dish (which was helpful when I used to be a Dish subscriber), as well as the Four Seasons hotel chain — something that I can’t begin to convey was so handy during pre-pandemic Four Seasons stays I enjoyed. Any questions you have can be instantly solved with a quick text that you fire off to the hotel chain straight from the Messages app.

As you can imagine, though, the story is far different with Facebook’s alternative to Apple’s Messages app.

Because Facebook Messenger is hooked up to the biggest social network in the world, it’s pretty easy to find almost any business you can think of if you need to send them a quick message within the app. I did this over the weekend, for example, when I had a question for the folks at the regional cinema chain in charge of all the movie theaters here in Memphis. To paraphrase a line from an old Steve Jobs keynote that you probably all remember, who wants to make a phone call? Yuck! I opened Facebook Messenger, dashed off my question to this particular cinema chain, and got an answer a couple of minutes later.

I’ve said it before: Everybody and pretty much every brand still has a Facebook page, and since a Messenger inbox is attached to that page, Facebook is basically a replacement for the phone book for me. I’ve contacted so many sources this way and successfully gotten tons of businesses to answer my queries with just a few taps, saving myself so much time that I would have otherwise spent on the phone.

If I could wave a magic wand and grant myself one wish, it would be that it becomes vastly easier to search for and interact with businesses like this within Apple’s Messages app, so that I could wean myself off of Facebook’s Messenger app for good. After all, the social network leviathan is being described by some people as the worst brand of 2020. Who do you know that prefers to use it over any other major messaging app?

Facebook Messenger, for me at least, is just too darn hard to let go of, though. It’s so, so useful. Currently, if you want to message a business through Apple’s Messages app, this is how Apple says you do it via Business Chat (compared to simply searching for the name of the business in the prompt box at the top of Facebook Messenger):

You can start a conversation through Maps, Safari, Siri, and Search, and through participating businesses’ websites and apps. Search for the business, then tap

and start the conversation.

If you don’t see

when you search for a business, it might not be verified with Business Chat. Not all verified businesses will have the same capabilities, such as making purchases or scheduling appointments through Business Chat.

If Apple improved this process, though, the Facebook weakness it could exploit is this — the fact that the social network has actually tied Facebook Messenger too closely to the mothership.

What do I mean by that? In my opinion, Facebook had a chance to have a truly dominant, unquestionably useful messaging app by improving Messenger as a standalone app as much as possible. Instead, Facebook has wedded it tightly to the main app — my search results within Facebook Messenger, for example, differ greatly depending on whether the main Facebook app is on my phone or not.

If it’s not, I get a truly odd and motley assortment of search results if I search for a person or business within Messenger. If I put the main Facebook app back on my phone, voila, problem solved — just open the main app and start a message from there by going to the person or business’ page. It stands to reason, though, that if people are slowly pulling themselves away from the main app in favor of hotter alternatives like TikTok — and if they ditch the main app from their phone but keep the messenger app — you’ll slowly start to see the weak spots in Messenger over time. And, let’s face it, there are plenty of Facebook-nevers out there, young people who skipped Facebook completely in favor of things like Snapchat.

Here’s to hoping I have a reason to open Apple’s Messages app a whole lot more in 2021, to the exclusion of Facebook Messenger and other alternatives.