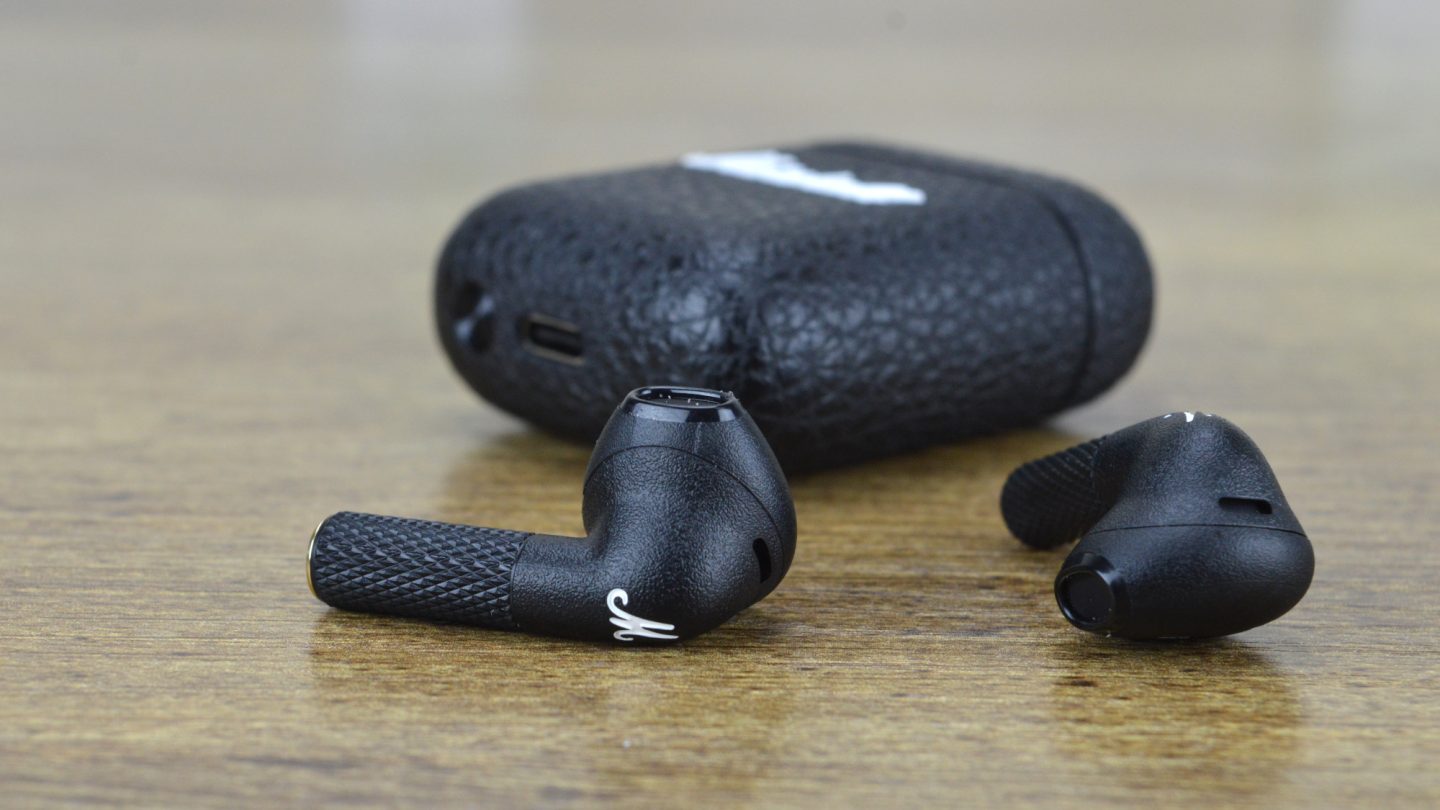 Marshall has long been a staple for musicians, thanks largely to its classic amplifiers. But in recent years, the Marshall name has been bleeding into the world of consumer tech, through speakers and headphones. The latest of these, the Marshall Minor III earbuds, are cheaper than the company’s other truly wireless buds, but keep the classic Marshall look, and undercut much of the competition.

The first thing to notice about the Marshall Minor III earbuds is their design, and they draw some pretty clear inspiration from Apple’s AirPods. They’re shaped very similarly to the second-generation AirPods, not the new, third-generation model.

Of course, they’re not the same as AirPods. While they retain Apple’s shape, they’re all black and feature a slightly rougher plastic to make for a textured look. Each bud has the Marshall logo on it. The charging case, which is also built from a textured plastic, has a USB-C port on the bottom, along with a button for pairing.

Each bud has a touch surface on it, and I don’t love it. I far prefer the squeeze controls on the AirPods to touch controls. Even adjusting the fit of the headphones can trigger touch controls, so I regularly paused audio without meaning to. That said, because they’re sensitive you can control audio without pressing too hard, which is nice.

Generally speaking, the Marshall Minor III earbuds look fine. They clearly rip off of Apple’s AirPods, and they may start to look a little dated soon now that Apple has introduced a new design for the base AirPods. But I like the textured plastic and overall build.

The Marshall Minor III earbuds aren’t the highest-tech earbuds out there. They don’t connect to an app for things like EQ control and touch settings, and they don’t have noise cancellation like the more expensive Marshall Motif buds. In other words, if you’re looking for tight integration with your phone, go for AirPods — these are basically just Bluetooth buds. And, they don’t even support Google Assistant or Siri, which is a little strange considering the fact that most Bluetooth headphones these days do.

But they do still offer some handy features. Chief among those is wireless charging on the charging case, which lets you plop your headphones down onto a charging pad like you would your phone. This isn’t unique — lots of wireless earbuds offer it. But it’s still nice to see. You’ll get a battery life of five hours of constant use, with the charging case getting you up to 25 hours. That’s not bad, but it’s not amazing.

The last-generation AirPods were relatively comfortable, though they did suffer from sometimes falling out of the wearer’s ears. Considering these are shaped exactly the same as the AirPods, they have the same advantages and disadvantages. The headphones were relatively comfortable for both short and long listening times, and while they’re probably not the best choice for running or working out, they stay in the ears perfectly fine for day-to-day use.

Ultimately, the most important thing to consider is how the headphones sound. Ultimately, they sound pretty good. There’s a decent amount of bass, relatively flat mids, and a clear high-end, for a generally exciting sound.

The bass response is pretty good, but I can’t help but wish bass extension was a little better. Marshall has gone for a more natural approach to bass, which means that if you’re a fan of big bass, these won’t really appeal to you. I would have liked Marshall to include a few different frequency profiles here, with one of them being a slight bass boost. But still, if you want a more laid-back bass response, you’ll like what’s on offer here.

The mids on these headphones are also relatively flat, while the highs offer a decently clear, making for a brighter sound in general. Again, a better high-end extension might have been nice, but the high-end that is on offer here isn’t bad at all.

The sound quality of these headphones is pretty good, but it’s not amazing for a pair of headphones in this price range. And, they’re held back by the fact that you can control the EQ to your preferences.

The Marshall Minor III true wireless earbuds aren’t bad. Marshall has ripped the design straight off of Apple, and the headphones don’t really offer much in the way of features. But they still sound pretty good, which definitely counts for something.

I hope Marshall ups its game in the headphone world soon. As a musician, the Marshall name carries a lot of weight for me — and I don’t necessarily feel as though these headphones quite live up to the name. They’re not terrible, but they don’t really beat out the competition.

If you want features and use Apple products, then it’s worth sticking with the AirPods. Even the previous-generation AirPods have the same shape and fit as these, but boast more features, despite not sounding quite as good. Or, if you can upgrade to the AirPods 3, you’ll get a better fit and Spatial Audio.

Ultimately, if you want a pair of non-Apple budget wireless earbuds, it’s worth considering the Nothing Ear (1) earbuds. These headphones offer some features, noise cancellation, and more — and all for around $100.

Should I buy the Marshall Minor III

No. If you won’t want to buy AirPods or spend more cash, you should buy the Nothing Ear (1) earbuds instead.