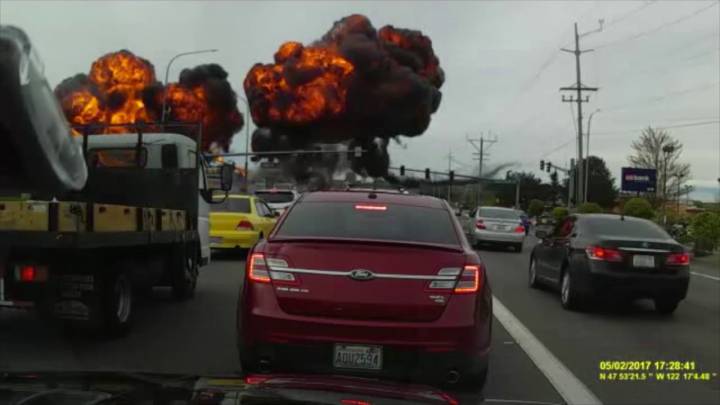 What appeared to be a catastrophic, potentially deadly accident turned out to be far less serious than the footage would have you believe. Earlier this week, a driver by the name of Guanting Li (Simon Li on YouTube) captured a dash cam video of a small plane crashing and exploding near a busy intersection in Mukilteo, Washington, clipping power lines and hitting cars on its way down.

According to local news station KIRO 7, plane fuel and fire poured down on to unsuspecting motorists from the skies before the plane took out the traffic lights on Mukilteo Speedway, hit at least five cars and skidded to a halt on Harbour Pointe Boulevard. At that point, it erupted into flames:

Incredibly, both the pilot and the single passenger in the Piper PA32 single-engine aircraft crawled out of the wreckage unscathed. In fact, no injuries have been reported from the crash at all.

The pilot told KIRO 7 that he started to lose power and couldn’t restart the engine shortly after taking off. Seeing that Harbour Pointe Boulevard was clear of traffic, he turned the plane in that direction, trying to cause as little damage as possible. As quickly as the plane had taken off from nearby Paine Field, it was smoking, mangled mess on a busy thoroughfare a few miles away.

While there were no injuries, traffic was blocked in both directions until the wreckage could be cleared and 9,000 resident of Snohomish County lost power. Considering how enormously destructive this could have been, backed up traffic and temporary loss of power sound like small prices to pay.