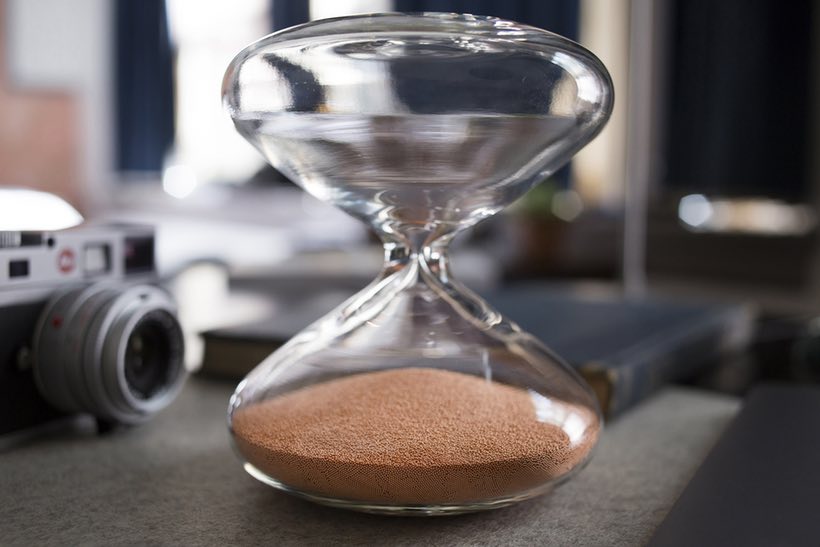 Design stories can be pretty silly, and that’s especially true for Samsung’s annoying smartphone design stories — here’s the most recent Galaxy S8 story. But Samsung designers aren’t the only ones that have exaggerated tales about their creations, and we’ve got one more such example for you. This time around, it comes from an Apple designer, although it doesn’t concern an Apple product.

Marc Newson created a special hourglass for Hodinkee that retails for $12,000. It’s handcrafted, and it contains noisy nanoballs instead of boring sand. No, there’s absolutely no reason to buy one, even if it’s a Newson creation.

The hourglass is 150mm tall and 125mm across at the widest point. It contains 1.3 million tiny copper balls that measure just 0.6mm in diameter, and measures precisely 10 minutes.

But the way Newson and Hodinkee describe it makes it sound like something that’s actually worth buying/watching/enjoying. It’s not.

“Sometimes you see an object, and it just captivates you. You can’t look away. You can’t even really explain what you’re looking at either,” Hodinkee says. “Marc Newson’s Hourglass is one such object. It takes the idea of one of the most basic time-measuring instruments ever devised, and pushes it to its limits.” Alright.

“It is perhaps one of the most fundamental objects in the world of timekeeping, and arguably one of the oldest, but I love the fact that it is so sort of deeply esoteric, and it has this strange and mesmeric quality,” Newson says in the promo video at the end of this post.

“On one hand, you’re witnessing time. But on the other hand, it’s completely sort of timeless, and it actually if anything focuses your attention on the opposite of time, if that makes any sense.”

It doesn’t. And, look, the actual manufacturing of the hourglass is impressive itself. The glass object requires a certain precision, and it’s hand made, which is remarkable. It’s just Hodinkee and Newson’s design stories that are annoying.

“Watching the Hourglass is a multi-sensory experience that cannot be communicated in words,” the blog post explains. “The combination of watching those first few nanoballs bounce around the bottom chamber, the flow begin to change surface patterns in the top chamber, and the unique sound of the nanoballs flying around, hitting the glass and one another as they settle at the bottom, is utterly mesmerizing. Invariably, the first time we show it to someone, there’s a gasp, a big smile, and sometimes even a little giggle as they lean in and get ready to watch for the full 10 minutes.” Mkay.