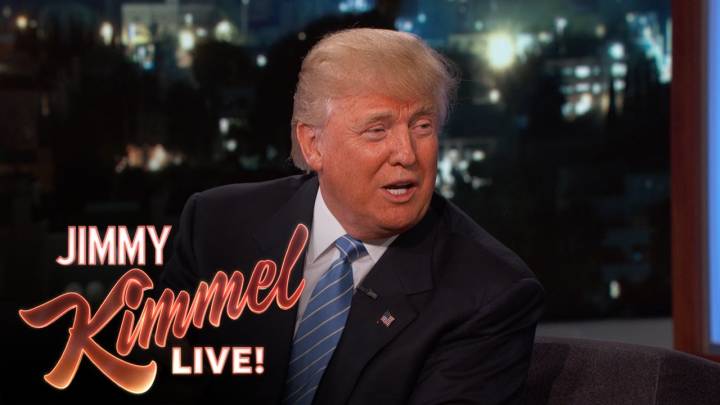 The presumptive Republican nominee for president of the United States of America, Donald Trump, made an appearance on Jimmy Kimmel Live this Wednesday.

As has become the norm for his talk show appearances, it was a relatively mellow affair, with Trump avoiding any of the colorful language or boisterous claims that draw crowds to his rallies all across the country, but there was one moment in particular that stood out like a sore thumb among the rest of the banter.

After joking around with Trump about his support for Hillary in previous campaigns, Kimmel asked the candidate what he thought needed to be done about the increasingly heated debate over transgender bathroom laws.

He then went on to say that “we have to protect everybody,” noting that the transgender community is relatively small at the moment, but could grow larger in the future. Confusingly, these points seem to contradict one another, as many states would inevitably decide not to protect the rights of that group.

Kimmel attempted to cut through the noise by asking Trump a pointed question about whether or not he, as a voting citizen of New York state, would vote to allow a transgender individual the right to choose an appropriate bathroom.

“Me? I say let the states decide,” he responded.

They proceed to go in circles for a few seconds until Kimmel finally asks Trump what “the right thing” to do is in this situation.

A strong take from the future commander-in-chief of the most powerful military forces on the planet. You can watch the full clip below: