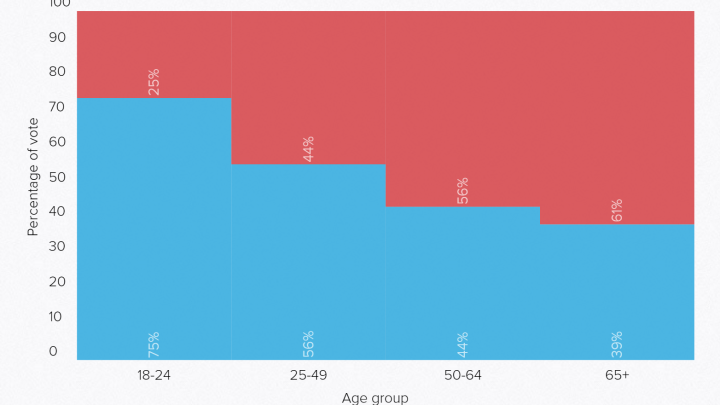 Last night, the majority of the British population voted to leave the European Union. It’s an act of direct democracy, high turnout voting on a simple yes-and-no question. But because of stunning generational divides, the result of the Brexit vote sure doesn’t feel like a fair and equitable outcome.

According to a YouGov poll, a huge majority of people under 50 voted to Remain. Among 18-24-year-olds, the age category that’s going to have to live with the consequences of this vote for all of their working lives, 75 percent voted to stay.

What we have are the generations that are already out of work (or close to it) handing down a verdict to their kids or grandchildren because of some mild fearmongering over immigration. The over-50s right now have enjoyed a career where Britain was part of the single market, able to enjoy all the benefits and economic growth that apply.

Now that the older generation is done, they’ve taken away freedom of movement, freedom to work and quite possibly a stable economy from people my age. Since the vote result came clear, stock markets have crashed, the sterling is at a 30-year low against the dollar, and big banks have already started moving staff to Frankfurt and Paris. Thanks, guys.

I’m not going to talk about the longer-term damage this may do to Britain and Europe, although signs (Scotland calling for a second independence referendum) are already there. Instead, let’s use this moment as a wake-up call to American voters facing one of the weirdest Presidential campaigns in modern history this fall.

British voters (or at least, old British voters) have been swayed by a combination of xenophobia and hankering back to some vague ‘good old days,’ and persuaded to tear down something beautiful. I don’t quite know if Nigel Farage called to “Make Britain Great Again,” but he might as well have.

By all means send a message to your political classes protesting the status quo. Just don’t protest so hard you make a decision the country will regret in the morning.