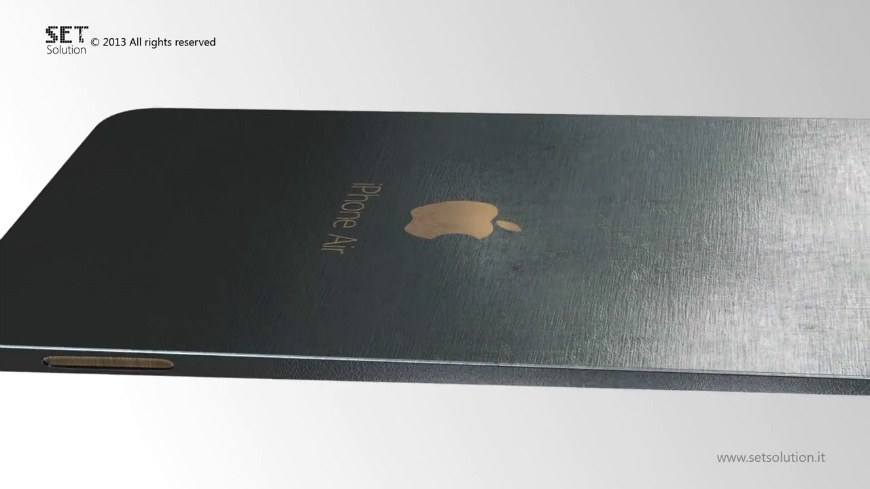 Even though the new iPhone 5s and iPhone 5c have only been available in stores for a few months, fans are already trying to imagine with help of concept renders and videos what the future iPhones may bring – that’s exactly what the designers at SET Solution did in the iPhone Air and iPhone 6c videos that follow, via Nowhereelse. However, while the renders look great and introduce some believable handset characteristics, they are not based in any way on what Apple actually has in mind for its upcoming generation of smartphones.

The imagined iPhone Air has a Touch ID fingerprint scanner, and a bigger edge-to-edge display, which are features we may very well see in the next-gen iPhone 6 model. But the iPhone Air is also tremendously thin, maybe too thin for what current mobile technology can support. We’re looking at 1.5mm thinness at the top, and just 3mm at the bottom of the phone. Moreover, with great thinness comes reduced weight as well, and this iPhone Air would weigh only 70g.

The iPhone 6c shown in the following video has a curved screen that just looks too fragile for its own good, albeit it’s still very interesting. In this instance, “C” stands for “curve” not just “color,” and the iPhone 6c would be somewhat similar to the existing LG G Flex that was just launched in certain markets when it comes to screen curvature. However, the iPhone 6c would still have a flat back, which means the top and bottom sides would be thicker than the middle section. Then again, we’ve seen plenty of wild smartphone concepts with curved displays lately, including some designs from Samsung, a company that has also launched its first curved handset. Other iPhone 6c features would include a Touch ID sensor, an edge-to-edge display, and a variety of colors for the plastic case.

More iPhone Air videos follow below, including a TV ad concept and a virtual unboxing.