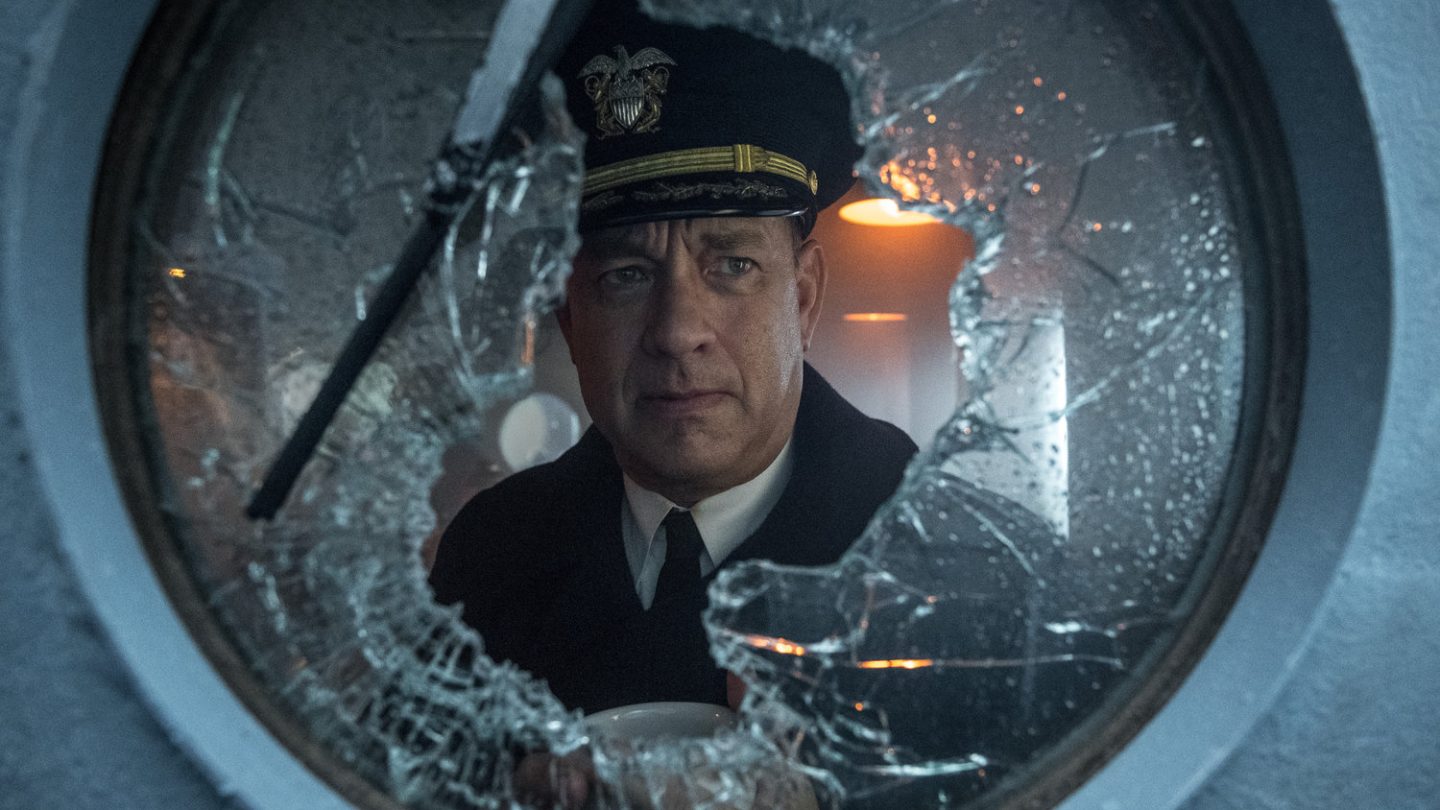 “Guten morgen Greyhound … You and your comrades will die today …”

Tom Hanks’ new WWII-themed naval drama Greyhound, which arrives on + this weekend, manages to pull off a neat trick to mark its foray into what has become a pretty crowded feature film genre.

When it debuts on Apple’s streaming TV service on Friday, the movie will feel like both a familiar vehicle for its bankable star, in that Hanks seems in no danger of running out of WWII material to dramatize anytime soon, but it will also represent something new to many fans of the genre: It’s a pretty standard war movie, though it unfolds from a somewhat unusual vantage point. One that keeps the audience pretty much on the shoulder of the decision-maker the whole time, as opposed to on the front lines or in the maw of the battle.

Hanks wrote the screenplay for Greyhound in addition to starring as a career Navy officer in charge of a destroyer during the Battle of the Atlantic. The movie was originally supposed to get a Father’s Day weekend release on the big screen, but the coronavirus pandemic obviously nixed that plan which is why Sony Pictures took it, instead, to Apple.

As far as what viewers are in store for, the film doesn’t really offer any Michael Bay-style closeups of the impact when guns find their target, no men or their limbs flying into the air amid explosions, and no camera shots at all from inside the German U-boats that bedevil Krause’s mission at sea. It’s an interesting choice, to keep viewers right beside the man-in-charge the whole time, rather than down near the men doing the fighting and the dying, amid the guns and glory. For much of it, you experience the fog of war right alongside the commanding officer — with an additional obstacle being that we don’t always understand what the orders that have been barked out mean, since we’re not fluent in Navy-speak. But that only adds to the verisimilitude, and we wouldn’t expect anything less from the star of Saving Private Ryan or the executive producer of HBO’s Band of Brothers.

About 20 minutes or so into Greyhound, we’re already in the thick of it. Hanks’ naval officer and his crew are frantic, suspecting that something is out there, and the staccato ping on their radar serves as a kind of heartbeat pounding in the background as danger draws near. Later on in the film, a menacing German voice crackles over the radio, having found the frequency the Americans are broadcasting on. He howls and bays like a wolf, promising they will all die soon.

There is plenty of action, and it can be treacherous, hair-raising stuff. The Americans are continuously tracking pings on the radar; Hanks’ character keeps his eyes glued to binoculars for sights like the ominous trail of a torpedo; sometimes you can see the hull of a U-boat slowly break the surface; and, at least once, the Germans use a pillenwerfer to fool the Americans, by launching a decoy into the water that gives off a sound as it floats, which the American radar picks up and they waste time (and depth charges) going after.

You don’t really need to know a lot of story here — basically, the Navy is protecting merchant ships on their way from the US to Liverpool in the UK. This is historical fiction based on the 1955 novel The Good Shepherd by C.S. Forester, and the narrative involves Hanks’ character being put in charge of a 37-ship convoy carrying thousands of soldiers and supplies across the Atlantic. The movie begins as the convoy leaves air cover provided near the US side of the voyage, at which point they’ll have to fend for themselves for five days through the part of the ocean infested with Nazi U-boats known as “The Black Pit” — until they regain air cover, this time from Europe.

In addition to Hanks, Greyhound also stars Stephen Graham, Rob Morgan, and Elisabeth Shue. It was directed by Aaron Schneider and produced by Gary Goetzman — and its addition to Apple’s streaming platform, which has been slowly finding its rhythm since launching back in November, comes as the service has attracted a fair amount of eyeballs from users trying it out during these days of quarantines and shelter-in-place orders, when everyone is stuck at home thanks to the coronavirus.

That’s according to a new study from Parks Associates, which found that 27% of American households have sampled + during the pandemic. That interest is good news for Apple’s service, which costs $4.99/month after a free week trial — and which has made a slight programming pivot since debuting with a heavily curated launch slate of mostly original TV series like The Morning Show, For All Mankind, and Little America.

The series orders for new shows have continued since then, with an Apple-like insistence on scarcity and quality, but the streamer has also been grabbing up lots of prestige third-party content. Examples of that include Apple teaming up with A24 on films like Sharper, starring Julianne Moore, as well as On The Rocks from director Sofia Coppola, starring Bill Murray and Rashida Jones. The Sundance 2020 Grand Jury Prize-winning documentary Boys State, with A24 as the distribution partner on the film, is also coming to +.

After Greyhound, we should add, there’s another Tom Hanks WWII drama that’s also headed to + soon — Masters of the Air, a sequel to the Band of Brothers miniseries. The creative team behind this series includes Hanks and Steven Spielberg, and it’s based on Donald L. Miller’s book Masters of the Air: America’s Bomber Boys Who Fought The Air War Against Nazi Germany.