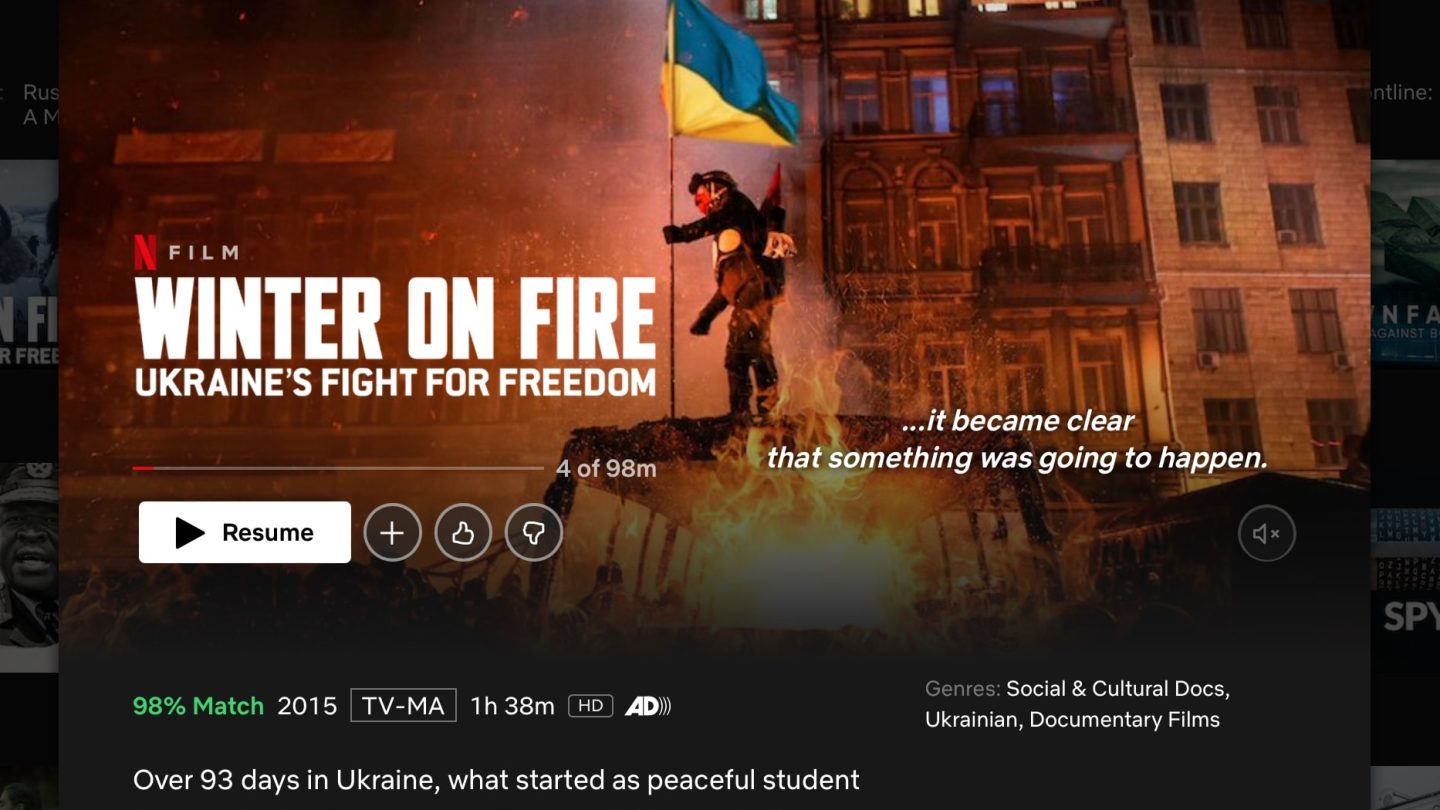 The wall-to-wall news coverage tracking all of the latest headlines out of Ukraine stemming from Russia’s invasion has underscored the livestreaming nature of modern warfare. One thing the news coverage is not so good at? Context and backstory. If that’s what you’re after, then the Netflix documentary Winter on Fire: Ukraine’s Fight for Freedom is a great place to start.

This 90-minute film was released back in 2015 and chronicles a period in Ukraine’s history from not so long ago. Eight years back, to be more specific, when the so-called Maidan Revolution ousted a pro-Russian government led by then-Ukrainian President Viktor Yanukovych. This Oscar-nominated Netflix doc tracks the revolutionary movement that sought to re-establish true democracy in the country. And, moreover, you can draw a straight line from it to the events happening there today.

The documentary wastes no time in throwing you, the viewer, right into the maelstrom of a violent protest. While the screen is still black, in the film’s opening seconds, we hear protestors yelling. The sound of gunshots. And then, a dateline.

“I’m filming,” a man answers back, in Ukrainian.

When the first image finally appears, it’s a bit chaotic. With the feel of a hand-held camera, it’s trained on a young man and positioned very close to his face. He’s wearing what looks like a battle helmet. Behind him was a trash-strewn plaza. Other protestors hold makeshift shields.

“Don’t go there! They’re shooting over there!”

Back to the young man: “I was just dragging a dead body. I stepped in blood. You can’t surprise me with anything.”

A bit matter-of-factly, here’s how Netflix summarizes the film that began thus. “Over 93 days in Ukraine, what started as peaceful student demonstrations became a violent revolution and full-fledged civil rights movement.”

The documentary’s director, Evgeny Afineevsky, has predicted to at least one news outlet that what he saw over the course of shooting this film convinced him that Ukrainians will fight Russia today to the last man. The taste of freedom, of democracy, that they’ve enjoyed over the last several years has the country loathe to even consider the possibility of becoming some kind of Russian vassal state.

Ukraine has “became a part of the European society, and they wanted to go a completely different direction [than Moscow],” Afineevsky told our sister publication, Deadline. “That’s the direction that they are fighting toward since Maidan … Believing in their freedom, believing in the freedom for the future of their own kids, it just proves that these people will not put their weapons down. They will be fighting until the last drop of blood.”

One of the things that have been so extraordinary about this return of hostilities to European soil again — of a degree not seen since WWII — has been the way the conflict has played out across screens. Not just via the predictable news coverage. But tens of millions of people around the world are also watching events unfold, in real-time, on their phones across social media.

When a tiny band of Ukrainian defenders of an outpost on Snake Island told a Russian warship to “go f**k yourself,” for example, audio snippets of that conversation quickly rocketed around the world on Twitter. Same with news that a mysterious fighter pilot nicknamed the Ghost of Kyiv has shot down as many as six Russian planes in one day.

Winter on Fire is one way to help understand all this in context, outside of the more in-the-moment news coverage that’s usually bereft of deeper analysis and historical insight.