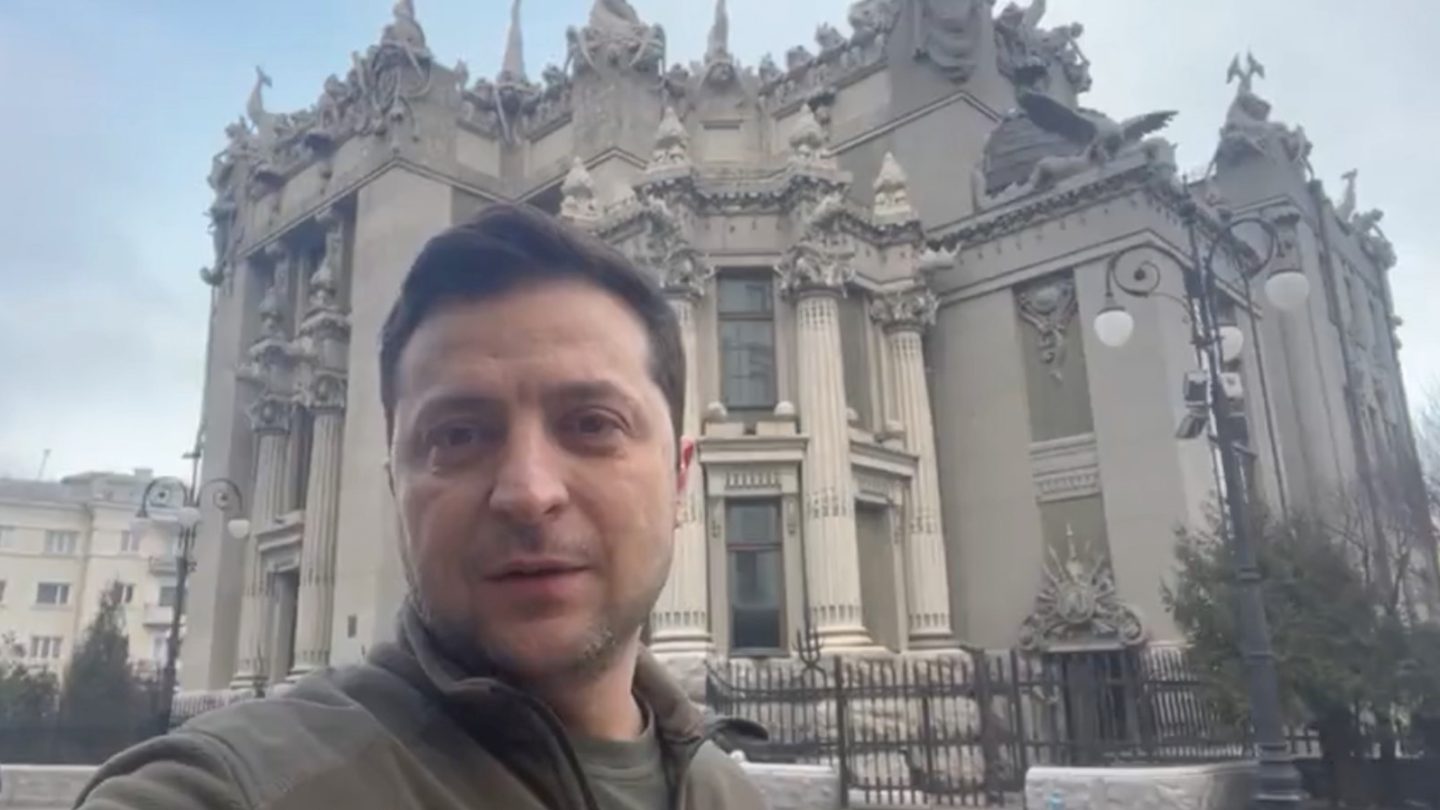 We’re four days into Russia’s invasion of Ukraine. The world is watching the conflict almost in real-time on social media. But even if you’re not actively following the Russia-Ukraine war, you’ll see several topics trend on Twitter and other places. It could be SWIFT, the Ghost of Kyiv, or even the Ukrainian President, Volodymyr Zelenskyy. The latter trended on Twitter this weekend, as reports detailed the fierce fighting in Kyiv, the Ukrainian capital.

Wearing khakis like in his previous live-stream remarks on social media, Zelenskyy posted a quick video yesterday. He wanted to prove to the world that he was still in Kyiv. And to counter reports claiming he evacuated the city as Russian elements fought the Ukraine army in the streets.

Zelenskyy is a former comedian who famously played the role of a teacher in a TV show whose criticism of the corrupt political system helped him become president. It turns out that Zelenskyy actually sought the highest office in Ukraine in real life. And he won the presidential elections in a landslide three years ago.

Fast-forward to late February 2022, and Zelenskyy is the acting Ukrainian President who has to lead his nation in the most important conflict Europe has seen since the Second World War. Zelenskyy might seem the least likely person to ever lead a nation at war, given his background. But the Ukrainian President has risen to the occasion since Russia invaded Ukraine last week.

Zelenskyy kept in contact with his people and the world over social media and TV from the early hours of the conflict. He urged Ukrainians to continue to fight, just as he lobbied for support from the US, NATO, the European Union, and the world.

That’s what any leader should do in times of conflict, one would think. As such, there’s no reason for the Ukrainian President to trend on Twitter during a conflict of the magnitude of the Russian-Ukraine war.

But Zelenskyy’s actions in the last few days turned him into a star who can continue to inspire his people to put up a massive fight against the invading force.

Even before Saturday’s live stream on Twitter, which topped 11 million views, the Ukrainian President shined on social media. He made it clear over and over that he was in the middle of the conflict. Take this response on Friday to Italy’s PM, where he explains why he could not take his call.

“We were supposed to talk on the phone this morning, but he was no longer available,” Italian PM Mario Draghi said on Friday morning.

A few hours earlier, Zelenskyy reportedly told European Union that the late Thursday-night call “might be the last time you see me alive.”

The Ukrainian President also said in other remarks that he is a primary target. Russian attackers who might be storming Kyiv will be searching for him. His family would be the second target.

On Friday evening, as Ukraine was preparing for another night of shelling and fights in the streets, the Ukrainian President posted another video message online (translated above). Unshaven and wearing khakis, Zelenskyy confirmed that he and members of his cabinet are present in the capital. And they’re not going away.

Early on Saturday, reports emerged that the US government asked Zelenskyy to evacuate Kyiv. Zelenskyy chose to stay, saying that “the fight is here; I need ammunition, not a ride.”

This is what Bruce Willis would say in an action movie. And the Ukrainian President’s background will undoubtedly help with such performances. Especially when it comes to live streams on social media.

But through his actions, Zelenskyy proved he is the leader Ukraine needs right now. And a star that’s trending on Twitter.

The White House had warned in previous days that Kyiv might fall, but that hasn’t happened. Russian forces attempted to encircle Kyiv and fighting erupted on the capital’s streets. But so far, the Ukrainian army has been able to repel the attacks.

This brings us to Saturday morning’s Zelenskyy video on Twitter (translated above). He reminded people that Russian “saboteurs” have marked him “as the number one threat.” But he made it clear that he would stay in the capital.

“I’m here. We won’t lay down our arms. We will defend our country because our arms are our truth,” the Ukrainian President said, dispelling reports that he issued surrender orders. “Our truth is that it’s our land, our country, our children, and we will defend all of this. That’s it. That’s all I wanted to say. Glory to Ukraine.”

Bloomberg also has a translated version of Zelenskyy’s video above.