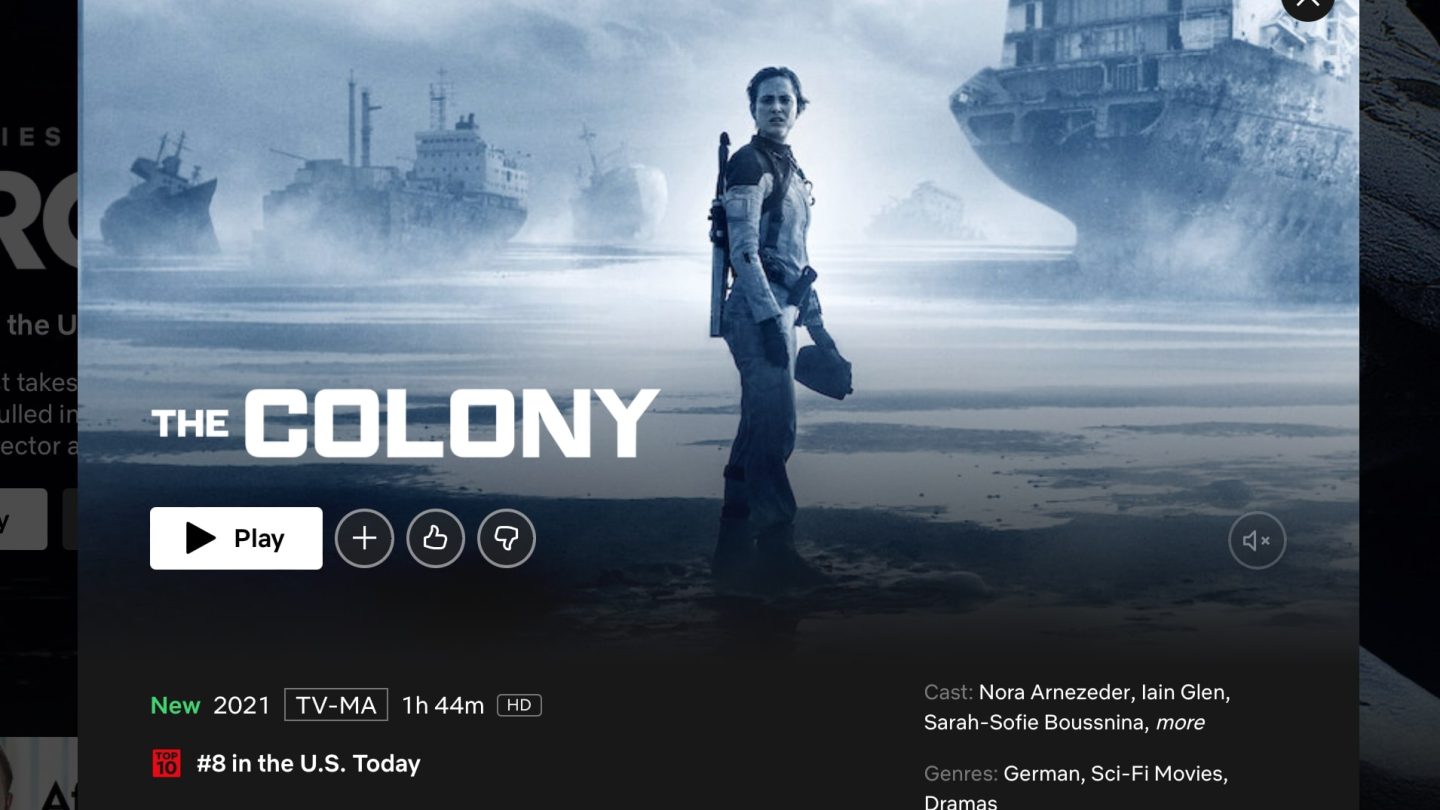 Apocalyptic movies are having a bit of a moment on Netflix right now. One of the biggest Korean-language releases in recent memory on the streamer, for example, is The Silent Sea. It told the story of a special team sent to the moon to retrieve an important sample from a research facilty. Meanwhile, back home, Earth has undergone “desertification.” And in addition to The Silent Sea, there’s also Don’t Look Up — a polarizing climate change allegory from director Adam McKay. It stars Leonardo DiCaprio and Jennifer Lawrence as astronomers warning the planet in vain about an impending catastrophe — and it went on to become one of the biggest titles of all time on Netflix. Also attracting considerable attention on Netflix right now? The Colony — a sci-fi title from Swiss director Tim Fehlbaum.

“Climate change. Pandemics. War,” one of the movie’s opening frames reads. “When Earth became uninhabitable, the ruling elite escaped to settle on Kepler 209.”

Generations after Earth was deemed uninhabitable and no new babies have been born, one astronaut is sent on a mission to seek out new life — but nothing could have prepared her for what she discovers.

The Colony is now on Netflix pic.twitter.com/ug68SQmwc6

Should you check this one out? Unfortunately, it doesn’t have great reviews at the moment.

As of the time of this writing, The Colony has a 46% audience and critics’ score on Rotten Tomatoes. It’s still early days, though. The 46% critics’ score is only based on 24 reviews. While the 46% audience score was only garnered from more than 50 ratings. Netflix’s description of the movie, meanwhile, is as follows. “A colony in space sends an astronaut back to Earth to decide the fate of the planet’s remaining inhabitants after the colonists become infertile.”

At the moment, The Colony is the #3 movie on the streamer in the US. Netflix also maintains a combined Top 10 list for the US that includes both TV shows and movie. The Colony is #8 at the moment there.

Speaking of the apocalyptic themes found in Netflix content like The Colony, there’s also still more to come along these lines — and soon — to the platform.

One of the most-watched Netflix titles of 2021 was the Korean TV series My Name, about a young woman who infilitrates a crime gang to avenge the death of her father. Kim Jin-min, the director of that series, is also helming another K-drama coming to Netflix soon: Goodbye Earth. Also known as The Fool at the End of the World, this one will be an adaptation of a novel of the same name. And it will follow a group of people after humanity is told an asteroid is about to smash into Earth.