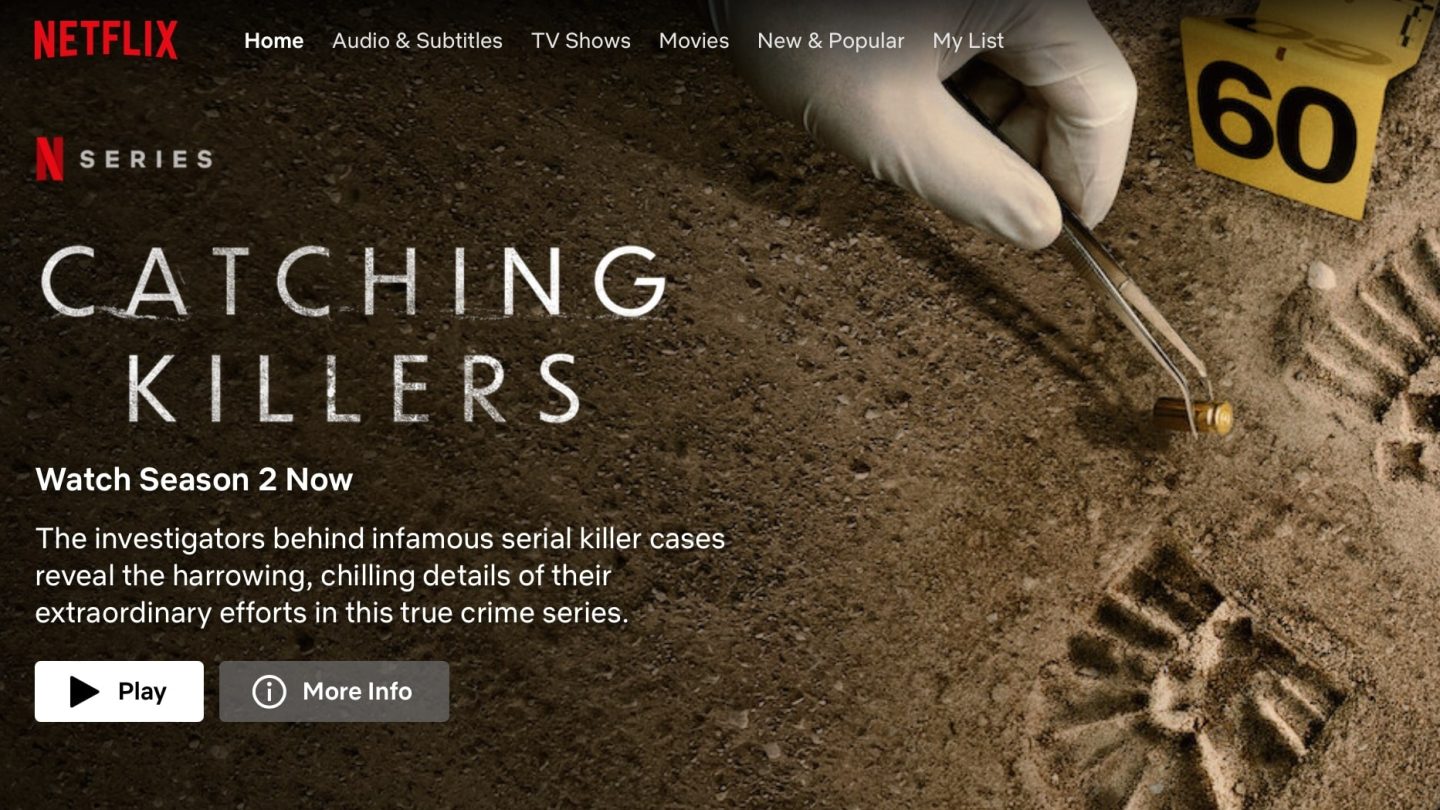 Netflix’s true-crime docuseries Catching Killers hooked me right away, from the opening seconds of the trailer for season one. “I’m going to be honest with you,” a grim man tells the camera. “Walking up to this crime scene after 30 years — the sad part, that somebody lost their life right here a few feet from us, just kinda rushes over you.” That should give you an idea of what this show — season two of which just dropped on Netflix — is all about.

More than anything else, Catching Killers is a sobering descent into the heart of darkness, into the most twisted minds and psyches of some of the worst people you can imagine. It also honors the special kind of hard work required to ultimately bring these killers to justice.

The gist here is you’ve got investigators walking viewers through the terrifying, and even stomach-churning details, of infamous serial killer cases.

For example, in the series’ first episode (titled Body Count: The Green River Killer), viewers learn the story of the unsolved murders of women around Green River, near Seattle — something that’s haunted investigators for decades. Until crime scene science finally allows progress to be made.

The upside to all this, if there’s even such a thing to be had here, is that this series thankfully only focuses on killers who got caught. Consider this series the real-life counterpart to something like Netflix’s Mindhunter — which, of course, was based on a real investigative team but was a dramatization of cases that team worked together.

Fans of that show have also been kept waiting for a while now, hoping (probably in vain) for a season three. If I had to guess, they’re fans of it partly because of the odd-couple nature of the team at the heart of Mindhunter. And that there’s something pretty satisfying about the good guys relying on luck but mostly their wits to outsmart and eventually catch the baddest of the bad guys.

The three cases this new season of Catching Killers focuses on, meanwhile, include that of the BTK Killer; one involving a serial shooter who targeted random civilians on the streets of Phoenix; and the so-called Toronto Village Killer.

The latter case stemmed from multiple gay men with similar features who started to go missing in Toronto. An international tip led detectives down a pretty awful road, one that included horrific claims of cannibalism. But, again, we should note — all of the killers herein were eventually caught. Some not until many, many years later. But caught, nonetheless.

Before this year, I wasn’t even remotely a fan of true-crime content like this. That is, until Netflix started turning out one unmissable example after another from this genre. With some of the best stuff in just the past few weeks alone — including two that I’ll detail below.

These two titles, one a limited series and the other a full-length documentary, had me hooked pretty much from the get-go and on the edge of my seat the whole time. They’re definitely worth checking out after you finish Catching Killers, and there’s even a strange, slightly surreal common thread that runs through both titles.

In both, there’s a crazed sociopathic fabulist who convinces women that he’s something extraordinary. In one case, a spy, and in the other a diamond merchant. He then uses his charm to — what else? — con the women out of tons of money.

The Puppet Master: Hunting the Ultimate Conman: In the case of this series, the whopper the guy tells is especially brazen. It’s along the lines of: I’m an undercover MI5 agent. You, and everyone you love, are in danger of assassination by the IRA. You need to come with me. Leave everything behind. Right now.

Later on, of course, he’ll start squeezing his terrified victims, who start depending on him for unnecessary “protection,” for money.

The Tinder Swindler: This documentary tracks the story of a billionaire playboy who trolled for beautiful women on Tinder. He groomed them over the course of a whirlwind romance to eventually believe his crazy story: That the diamond merchant game is dangerous. That bad men are out to get him. In fact, his life is supposedly in danger. And that since these shadowy bad guys can track his spending, can he please borrow your credit card instead?

What’s so great about the latter documentary, though, is that it switches tracks about halfway through. The focus shifts to the efforts of the women, who ultimately team up to take down the conman. I’ll spare you the details if you haven’t seen it yet. But it involves a devastating newspaper expose, for starters. And an oh-so-satisfying con of the conman himself.

Meantime, a GoFundMe campaign has been launched to help these women recover some of the money they lost to the Tinder Swindler — who, we should note, the dating app formally banned from the platform in recent days. As of the time of this writing, the campaign has raised just shy of 60,000 pounds for the three women.