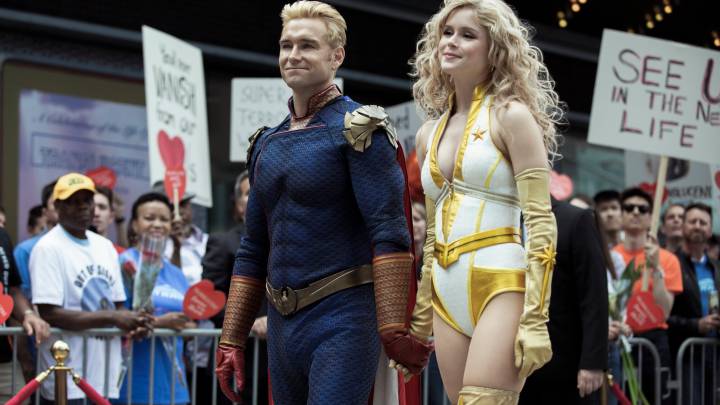 At one point during the just-released second season of Amazon’s hit series The Boys, one of the costumed heroes (named Starlight) gives a speech as her eyes start to fill with tears. A speech that, for me, perfectly encapsulates the kind of anti-hero, anti-Marvel Cinematic Universe feel of The Boys, wherein the good guys — yeah, they have superpowers, but they’re just as flawed and imperfect as the rest of us. “I gave my whole life to nothing,” Starlight laments. “The good guys don’t win. The bad guys don’t get punished. What we do means nothing. It’s just all for money.”

Depressing? Hardly. I’m addicted to this series, which debuted on Amazon Prime Video earlier this month, and which is one of the most-watched TV shows across all the major streamers right now. It’s at the top of our list this week, in fact, for reasons that if I had to guess have to do with the disquiet that pervades the world we’re living in right now and the unsettling feeling that’s permeated pretty much all of 2020.

Marvel gave us the most successful big-screen movie franchise ever by presenting one story after another of selfless, larger-than-life heroes who do the impossible, save the world, and get the girl (most of the time). Eric Kripke, who developed The Boys for Amazon, told The New York Times that he’s more attracted right now to the kinds of stories about heroes that you don’t tend to see on the big screen: “My worldview is, the more human and vulnerable you can admit you are, the more heroic and stronger you are. To me, heroism doesn’t come from swooping in — it comes from quiet little moments of grace among people just trying to find each other and form families. That’s how the world gets saved.”

All off that might help explain why The Boys is currently the top streaming series for the week based on the latest data from Reelgood. That’s the streaming search engine service which, on a weekly and monthly basis, shares with BGR a snapshot of what its millions of monthly users are consuming at any given time via the service.

The latest weekly data, which as noted is topped by Amazon’s The Boys, covers the week of September 10-16, and you can check out the full list of the week’s top series below.

These lists are useful in getting a sense of what’s getting the most traction at any given moment in time across the major streaming services. Below, for example, Netflix’s Cobra Kai series that follows characters from The Karate Kid into middle age, remains a big streaming draw, while Netflix’s Away and HBO Max’s Raised by Wolves are additional highlights.

Without further ado, the Top 10 series for September 10-16, per Reelgood, are as follows: