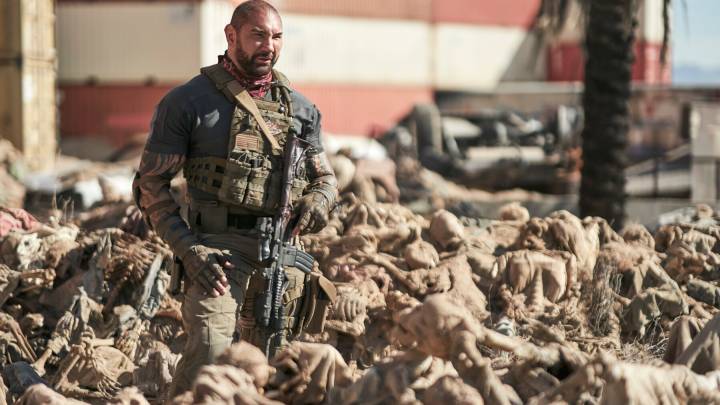 Netflix deserves a round of applause, and I’ll tell you why.

At this point, a certain kind of pop culture fan doesn’t need another army of the undead threatening to wipe out humanity yarn. Been there, done that. I need something new, fresh, and exciting — and some attitude certainly doesn’t hurt. Netflix’s newest hit original film, Army of the Dead, checked all of these boxes and more for me, and apparently did the same for many of you all, too (since the Dave Bautista-led action title tops our list of the most-watched movies across the major streaming platforms this week). The writing was crisp, with great banter, fun characters, over-the-top action, and the addition of both a heist element as well as excesses like a zombie tiger. “It’s a (expletive) zombie tiger, that’s crossing the line,” casino owner Bly Tanaka’s associate Martin laments during the film.

As of the time of this writing, the film has a 70% and 76% critics and audience score, respectively, on the review aggregation website Rotten Tomatoes. Netflix, for its part, says there’s really no better way to describe the film’s success thus far than to note that it’s absolutely crushing it on the streaming service, which said on Friday that Army of the Dead is projected to be one of the streamer’s most popular films to-date in its first four weeks of release.

According to the team at the streaming search engine service Reelgood, which each week measures what its millions of users are streaming the most and shares the data with BGR, Army of the Dead is also the top movie this week across all of the major streaming services.

Nevertheless, it’s still near the top of our weekly ranking this week, so plenty of people are apparently liking what they see. And if you need some more streaming recommendations, check out the full list of the most-watched movies at the moment (covering May 19 to May 26), again, from the team at Reelgood. The top 10, including links that take you to the various streaming destinations, are as follows: