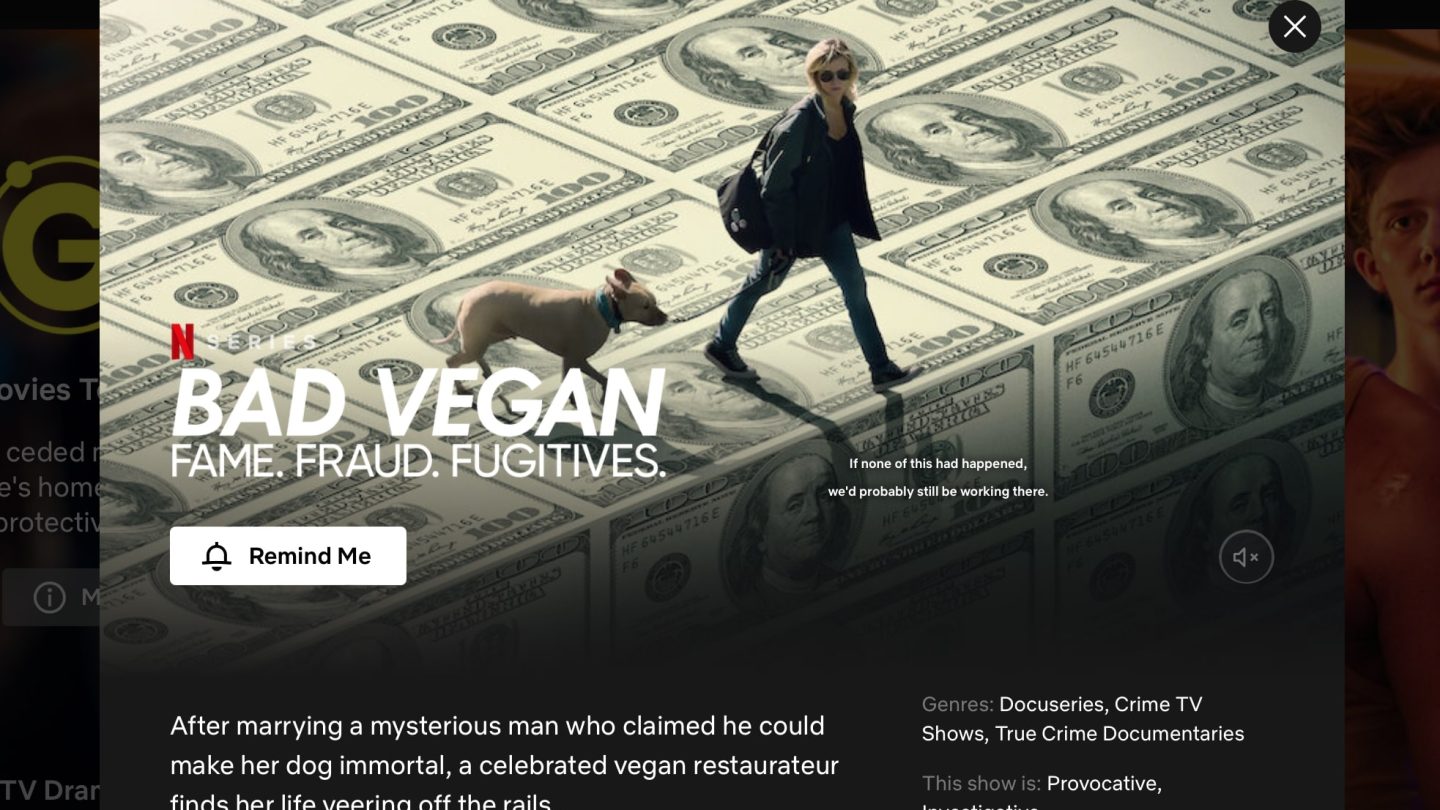 The Tinder Swindler is currently the #1 English-language film on Netflix, with the jaw-dropping true-crime documentary garnering 45.8 million hours watched globally for the week ended February 6. That’s not a surprise, because the film is so well put-together, and the women who were wronged are so compelling, that it’s one of the most memorable watches so far this year on Netflix. Meanwhile, the next true crime title on Netflix that will similarly have everyone talking is almost here. Get ready for Bad Vegan.

Netflix has developed a pretty solid Midas touch when it comes to true-crime content, including everything from 2020’s Tiger King to this year’s Tinder Swindler as well as The Puppet Master: Hunting the Ultimate Conman. Speaking of Tiger King, Bad Vegan comes from the producer of that one, Chris Smith. So what’s this one all about? Oh boy, get ready. It’s got a super-trendy vegan restaurant. The owner, a Wharton grad with the stunning good looks of a model. And, yes, another conman.

You can check out the trailer below, which Netflix released on Tuesday (it’s also embedded right here):

The aforementioned Ivy League grad restaurateur, Sarma Melngailis, seemingly had it all at one point. She had a high profile and a successful business, called Pure Food & Wine, that attracted big names like Alec Baldwin, Owen Wilson, and Bill Clinton. Until she met a scammer named Anthony Strangis, after which point as one writer has noted she “fell rapidly into an underworld of fraud and opulence.”

Melngailis ends up marrying the guy, and Netflix’s newly released trailer shows how things get epically crazy from there. For one thing, her husband apparently convinces her that he can make both her and her pit bull immortal.

And, honestly, that’s not even the weirdest part of the trailer.

“Do you know about the meat suit?” someone behind the camera asks one of Melngailis’ associates at one point in the trailer. It’s clear this person has no idea what the question is referring to, and her response is like — oh God, what now?

“It makes her look like the Vegan Bernie Madoff”

The whole ordeal has been “the worst nightmare you can think of,” Melngailis told The New York Post in a jailhouse interview in 2016 at Rikers. “If I had terminal cancer, it would be better than this, because at least (then) I did not cause it.”

That Post article about the scandal goes on to note that almost two dozen angry former employees of Melngailis packed Brooklyn Criminal Court to watch Melngailis get locked away. The couple was reportedly charged with 24 counts of theft, labor fraud and tax crime charges.

Benjamin Dictor, an attorney for a group of her former employees, blasted her as “the vegan Bernie Madoff.”

The Netflix summary about Bad Vegan only hints at the high drama herein: “After marrying a mysterious man who claimed he could make her dog immortal, a celebrated vegan restaurateur finds her life veering off the rails.”