In early 2017, I reviewed Abode, a smart home security system that you build yourself and set up however you want it. I found it to be very straightforward and surprisingly versatile, with a hint of that “it just works” magic. Now, over two years later, Abode has evolved.

There are two big things that have changed in the years since I first reviewed the Abode system. The first is a new hub unit called iota, and the second is full HomeKit compatibility. Abode is particularly proud of that last point, and they probably should be considering it’s the first DIY smart home security system to actually get approved for HomeKit.

The Abode iota is an upgrade over the “Gateway” hub unit that controls all the various Abode hardware. The new hardware acts as a hub but also includes a 1080p streaming camera and two-way audio. Like the other Abode camera units, it can be configured to record when it sees motion, when a door opens or closes, or when an alarm triggered for any reason.

Where I previously had the gateway hub in an upstairs room, out of the way, I stuck the iota right in my living room. It has built-in Wi-Fi and doesn’t need an ethernet connection, so you can stick it anywhere that has a power outlet nearby, which is a big step up from the gateway I had been using.

It’s relatively speedy to access a live feed of the iota camera via the Abode mobile or web app. At 1080p, it’s nice and sharp and it automatically switches to an infrared mode at night, which is nice. You can also lower the resolution if you want, which might be a good idea if you’re going to be checking in over a cellular connection a lot. When the camera is triggered by an alarm or other action, the camera captures clips as long as 30 seconds. The video quality isn’t going to win any awards, but it’s more than adequate for this kind of thing. 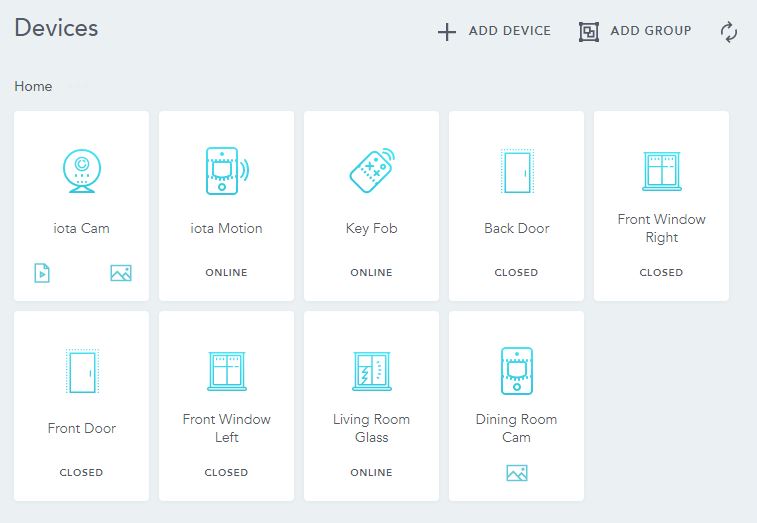 The best thing about the Abode system is the freedom to customize it however you want. The CUE Automations feature (still in beta) is impressive in its flexibility. Think of it like IFTTT, but for security.

For example, I have it set up so that every time the back door opens, a push notification is sent to my iPhone (and watch). However, if the back or front door open after a certain time in the evening, I get a push notification, the alarm beeps quietly once, and a photo is captured. If the glass break sensor is triggered, all of the cameras start recording, the alarm sounds, and my phone lights up like a Christmas tree. That last automation was put to the test when my cat knocked a glass off my coffee table at 2 a.m. one night and my house became Fort Knox for a solid five minutes.

Abode offers custom monitoring plans and subscriptions if you need them. You can opt for professional monitoring when you need it, kick in a few bucks and have the company keep an eye on your system while you’re on vacation. None of this is required, which is great if you prefer the monitor-it-yourself approach, as I do, but it’s available when you need it.

HomeKit functionality was just added to Abode within the last week. All it took was a quick update prompted within the Abode app and the iota magically appeared in the Home App and all the window and door sensors popped up along with it. The entire process took about a minute.

Setting up automation within Apple’s Home app isn’t all that much different than using Abode’s own automation system, but it allows you to use the Abode sensors as triggers for other HomeKit-compatible hardware like lights and smart plugs. Being HomeKit approved also means you can use Siri to control various routines and arm or disarm the system. 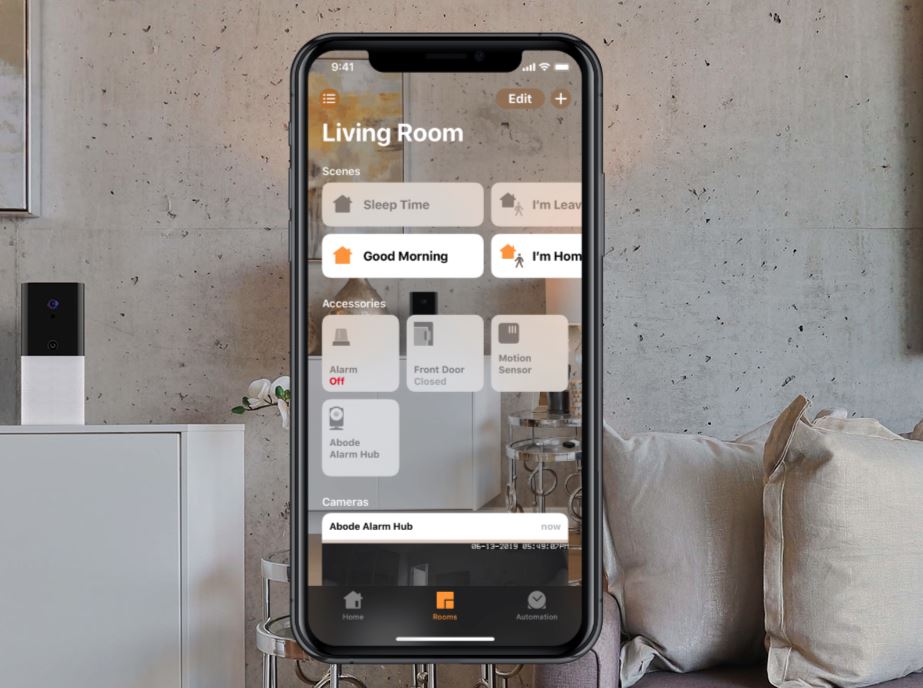 Having HomeKit baked right into the system is a huge plus if you’re in the iOS ecosystem, and at the moment Abode (with the iota as the core) is the only build-as-you-go security system that boasts HomeKit approval. Abode says it’s still working on getting HomeKit approval for the original Gateway hub, but since the iota starter kit is just $29 more than the kit that includes the older style Gateway hub ($329 vs $299) it’s hard to imagine not going for the iota at this point.

At the end of the day, there are a ton of modular smart home security systems out there. You can get door sensors, alarms, and cameras under a dozen different brand names. Extra features are really what set one system apart from another. Abode has been steadily improving its offering for years, upgrading the hardware and now gaining a hard-earned nod from Apple and a welcome into the HomeKit family. That’s a big deal and it would seem to indicate that Abode is going to be around for a while.