New controllers for the Nintendo Switch aren’t cheap. In fact, whether you’re planning to pick up a new set of Joy-Cons or a Nintendo Switch Pro Controller, you’re going to end up paying more than you would for a DualShock 4 or an Xbox One controller. Thankfully, 8Bitdo makes some of the best retro controllers on the market, and as of today, they’re all compatible with the Switch.

On Tuesday, 8Bitdo released the firmware 4.0 update for all of its firmware upgradeable controllers. Although this covers a variety of controllers, 8Bitdo says that only the NES30 Pro and FC30 Pro are able to “offer a fully mapped button set for Nintendo Switch.” Many of the others simply don’t have enough buttons to play every game on the Switch, though they will still connect to the console.

This actually isn’t the first time we’ve covered 8Bitdo’s killer retro controllers. Late last year, the company released a controller set with a Bluetooth retro receiver for the NES Classic Edition. The controller that came with the NES Classic was faithful and relatively comfortable, but its cord was far too short. With 8Bitdo’s wireless NES30 controller, NES Classic owners no longer had to worry about cords.

If you’re looking for a few extra controllers for your Switch, but don’t want to break the bank, you might want to consider picking up an 8Bitdo controller or two instead of investing in Nintendo’s outrageously expensive Joy-Cons. We’ve included Amazon listings for the two 100% compatible controllers below: 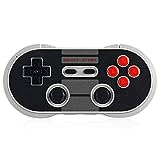 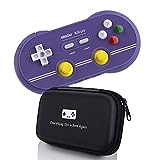 Tweet
Every movie and TV show leaving Netflix in June