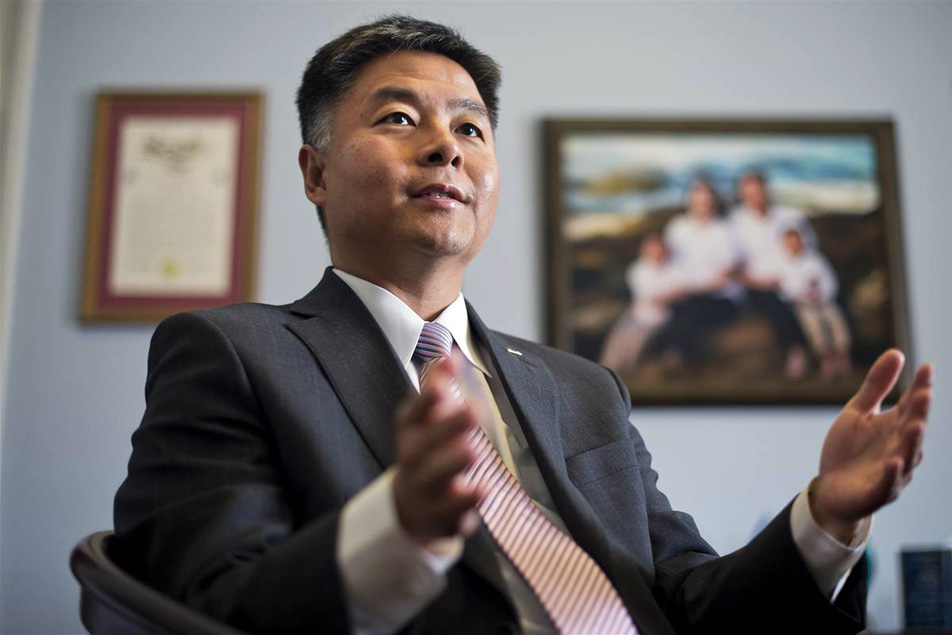 Ted Lieu is one of the few bona fide computer geeks in Congress. Even if you didn’t already know the California Democrat is one of only four congressmen (out of a total of 535) with a computer science degree, it’s the kind of thing that quickly becomes apparent when talking to the Stanford grad about a range of privacy and encryption matters.

For starters, he recently downloaded and started using WhatsApp, the Facebook-owned messaging platform that earlier this month defaulted to end-to-end encryption for all users. He’s not only a supporter of strong encryption without backdoors — Lieu considers it “a national security priority.”

Earlier this year, he co-sponsored legislation that would introduce a National Commission on Security and Technology Challenges. Essentially, it would impanel a group of digital security experts to make recommendations on how law enforcement can pursue investigations without undermining privacy protections or the competitiveness of U.S. tech companies.

It’s also not every day you hear a sitting U.S. congressman ask you, as Lieu did during a conversation with BGR: “Hey, by the way, do you watch ‘Mr. Robot?’ … I actually don’t think the show is far-fetched at all.”

As the idealogical fault lines over encryption and privacy continue to sharpen and government officials past and present continue moving over to this or that side of the line, Lieu represents an influential addition to the debate. Notwithstanding his membership in the minority party in the House, he’s a current federal lawmaker who thinks that writing new laws around encryption and privacy is something the government isn’t ready to tackle quite yet.

“My general view is I’m a great believer in both state and federal legislatures,” Lieu told BGR.

At the same time, though, Lieu thinks that persuading lawmakers to pass legislation that tries to prevent situations like the recent flap between the FBI and Apple over an iPhone belonging to one of the San Bernadino shooters isn’t the right approach.

“(Legislatures) do a lot of good for America, but there are some things we’re not,” he continued. “We are not nimble. We are not quick. We’re not elegant. And the law is often a very blunt instrument to try to address a problem. With technology, it’s pretty much the exact opposite of all of those characteristics. My view is you have to have very precise and well-written laws to address issues on technology. That’s often hard to do. And if you can’t do it right, my view is we shouldn’t be doing it at all.”

Former Homeland Security Secretary Michael Chertoff, who today has a security consultancy called the Chertoff Group, is among a set of ex-national security types mentioned in a New York Times piece a few days ago who – perhaps surprisingly – side with Lieu when it comes to encryption. They include officials like former director of national intelligence Mike McConnell; former CIA director R. James Woolsey and former White House counterterrorism official Richard Clarke, among others.

This is from a 28-page report prepared by the Chertoff group about encryption:

“Efforts to constrain encryption through forms of extraordinary access (for law enforcement) will inevitably introduce vulnerabilities into the security of consumer products in ways that are likely to have an adverse long-term effect on the security, privacy, and civil liberties of citizens … our conclusion is that a mandate to require extraordinary lawful access to commercial encryption products would incur greater social, security, and economic costs than the benefits it would achieve. Based on what we know today from the public record, we recommend against the enactment of (an) extraordinary lawful access requirement.”

Lieu, for his part, thinks now is also the least ideal time for congress to try to get involved.

“That’s why you have (defense secretary) Ash Carter coming out publicly saying he’s a strong believer in strong encryption without back doors, and that he doesn’t believe legislation should be done in times of grief and anger,” Lieu says. “The FBI tries to frame this as privacy versus safety. And when you frame it that way, of course you’d say, well, we want our lives. But that’s not the proper frame. Because you can’t do back doors just for the good guys.

“My view is there’s not a lot of technical expertise in congress. I’m the only Democrat with a computer science degree. Before we wade into this fast-evolving area, let’s take a step back, get all the relevant information and consult with experts before moving forward.”