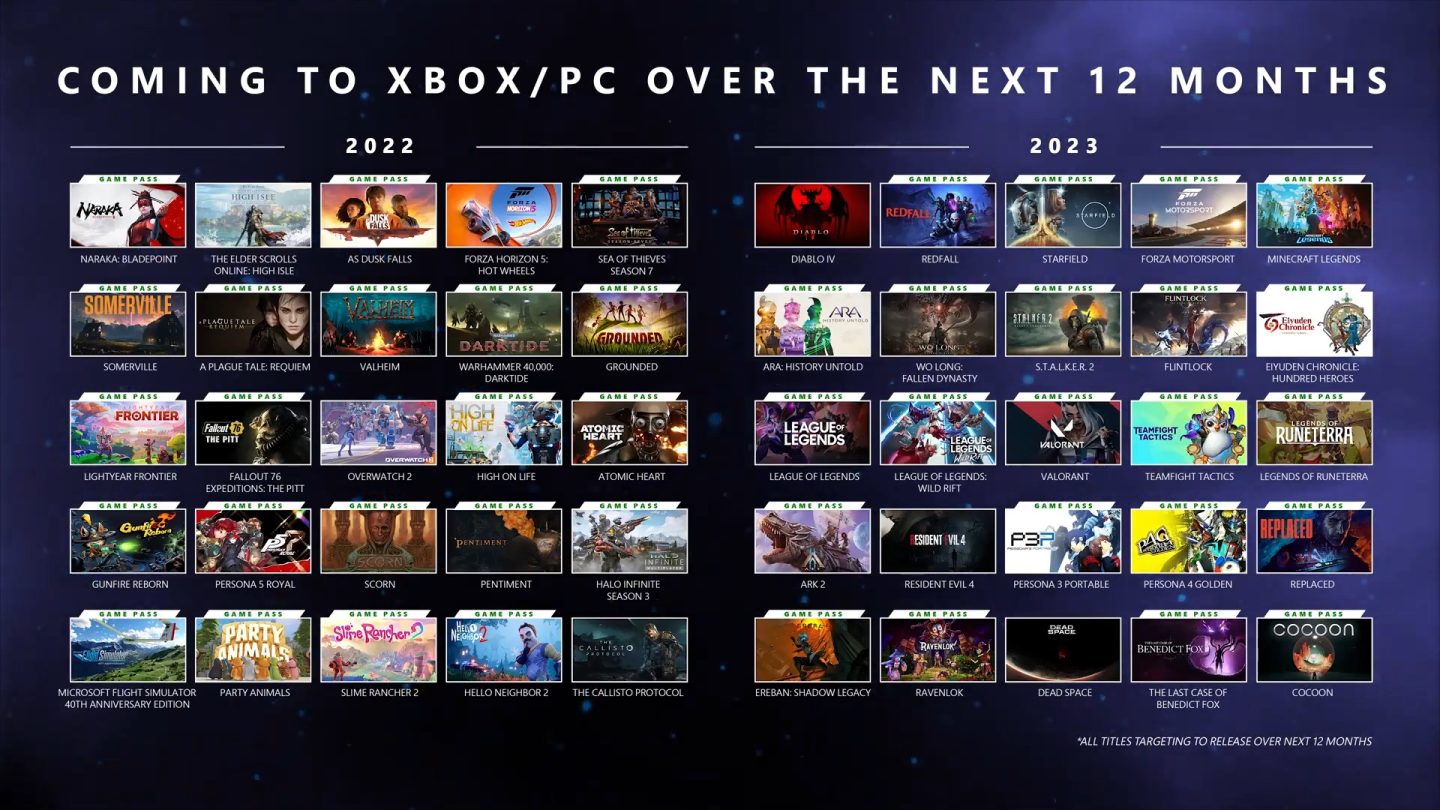 Xbox and Bethesda traditionally host their own separate showcases around this time of year. But with E3 taking the year off and Microsoft having closed its acquisition of Bethesda last March, it only made sense for the two to team up once again. What we got was the latest edition of the Xbox and Bethesda Games Showcase, packed with huge reveals.

Microsoft says that every game we saw at the showcase is targeting a release date within the next 12 months. So you should be able to play most of these games by next summer, including Starfield, Forza Motorsport, Diablo 4, and Redfall.

Keep scrolling for all of the biggest reveals and trailers from the showcase.

We got our first extended look at the gameplay of Arkane Austin’s open-world, cooperative first-person shooter Redfall. It’s coming in early 2023.

Once upon a time, Silksong was going to be an expansion for the action-platformer Hollow Knight, but it eventually became its own game. We still don’t have a release date, but we do know that it’s coming to Game Pass whenever it does finally launch.

A bizarre-looking first-person shooter with talking guns from Justin Roiland of Rick and Morty and Solar Opposites fame. It’ll be out on October 25th.

All of Riot’s biggest games are coming to Game Pass with some major perks:

The sequel to 2019’s dark action-adventure game A Plague Tale: Innocence, Requiem will once again task the player with surviving in an unforgiving world. Asobo Studio wasn’t ready to reveal a release date, but it will be out later this year.

The eighth entry in the Forza Motorsport series doesn’t have a number, signaling a reboot of sorts for the sim-style racing game. Turn 10 Studios says the new Forza is “the most technically advanced racing game ever made.”

Microsoft Flight Simulator will celebrate its 40th Anniversary in November 2022. Also, Microsoft added the Pelican from the Halo franchise into the game.

Overwatch 2 will be free-to-play when early access begins on October 4th. We also met the newest hero coming to the sequel, Junker Queen.

Ara: History Untold is a new turn-based, historical grand strategy game that allows the player to build up a nation throughout global history.

The latest expansion for The Elder Scrolls Online is set in a region that no other game in the series has ever explored before. The High Isle expansion is coming out on June 21st.

Fallout 76 is adding a new region called The Pitt this September, bringing new alliances, new challenges, and new rewards to the MMO.

Just like its predecessor, Forza Horizon 5 is getting Hot Wheels DLC on July 19th. You can build your own tracks with 80 new track pieces and race in 10 new cars.

A new game in the ARK universe is coming in 2023 starring Vin Diesel (The Fast and the Furious) and Auli’i Cravalho (Moana).

This grotesque first-person survival horror game was originally announced in 2014, and it’s finally coming out on October 21st.

Flintlock: The Siege of Dawn

Flintlock: The Siege of Dawn is an open-world RPG with “gunpowder-packed and magic-fueled combat” coming to consoles in early 2023.

Minecraft Legends is a new action strategy game in which you united the Minecraft overworld. It’s making its debut in 2023.

Settle down on a new planet by gathering resources, farming, and building your home. Lightyear Frontier is launching in early access in spring 2023.

The popular rogue-lite first-person shooter Gunfire Reborn is coming to Xbox in October.

The Last Case of Benedict Fox

The Last Case of Benedict Fox is a 2D action-platformer about a detective with a demon companion, and it’s coming out in spring 2023.

The studio Interior/Night describes As Dusk Falls as an interactive drama. Up to 8 players will be able to experience the story together on July 19th.

Naraka: Bladepoint is a battle royale with swords and bows instead of guns and rockets. Up to 60 players compete to win online matches. The game will also ship with a single-player campaign when it hits Xbox on June 23rd.

Pentiment is a narrative adventure game from Obsidian Entertainment set in 16th century Bavaria, and it will launch in November 2022.

Obsidian’s long-gestating survival game is finally leaving Game Preview this September. You can finally experience the full story this fall.

Ereban: Shadow Legacy is a fast-paced stealth platformer in which you can use mystical shadow powers and high-tech gadgets to dispatch your foes.

Diablo IV is coming to Xbox, and it will have a new class: Necromancer. The long-awaited sequel takes many cues from massive-multiplayer online games, with a shared world between players, world bosses, player vs. player battles, and more. Diablo IV launches in 2023.

The next Sea of Thieves update will let you save ship layouts, customize your cabin, name your ship, and cash in at new points. Season 7 is coming on July 21st.

From the creators of Echo Generation comes Ravenlok, a fairytale action RPG in which a young girl has to fulfill a dangerous prophecy.

Jeppe Carlsen, the lead gameplay designer of LIMBO and INSIDE, is back with a potentially less terrifying puzzle game called COCOON.

Use swordplay based on Chinese martial arts to fight off deadly creatures and enemy soldiers in Wo Long, the latest game from Team Ninja.

Kojima Productions is working on a new game with Xbox Game Studios.

The first extended gameplay footage from Starfield takes place on Kreet, a moon of Ansolon. We see the player character walk out of their ship alongside a robot companion. There is dangerous-looking wildlife on this moon, but they aren’t aggressive. We see the player mining for resources before discovering a research facility that has been taken over by pirates. The combat looks like fairly traditional FPS fare. There is a lockpicking minigame.

We also got a look at the capital city of New Atlantis, which is filled with NPCs going about their lives. The facial animations aren’t half bad! And the character creation is the most customizable of any Bethesda title. Starfield has upgradable skills, crafting, and the ability to build your own outpost. You can also build your own spaceships, pick crew members, and customize the look and layout. And, of course, you can fly the ship from planet to planet and engage in space combat.

In all, Starfield contains over 100 systems with over 1,000 planets to explore. It’s coming to Xbox consoles and PC in 2023.

That’s everything that we saw at the Xbox and Bethesda Games Showcase.