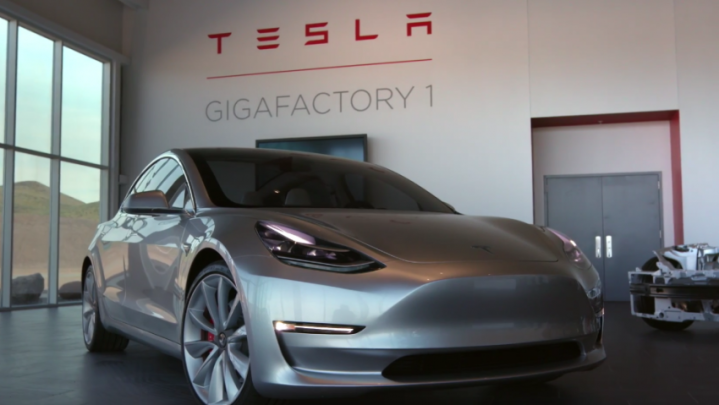 Regardless of how long it will actually take to ship, the Tesla Model 3 is definitely the talk of the auto industry so far this year. After racking up over 400,000 reservations, the Model 3 has shown it has the potential to significantly disrupt the auto industry and pave the way for the future of electric cars.

Motor Trend recently took a trip to Tesla’s Gigafactory in Nevada and got some exclusive photos and video footage of the Model 3, while also getting some new commentary from Tesla representatives explaining the car’s design.

Among other things, Tesla testing director Kim Reynolds talks about the grill-free nose on the front of the Model 3 that has drawn some criticism from an aesthetics perspective.

“I like a couple of things about it — it’s aerodynamically correct and functional so the air is going to move around properly at the front of the car,” he explains. “And also, it’s honest. So what you see here is really a lack of a grill. There’s no fake grill or openings or anything like that up there that don’t do anything.”

Reynolds also goes into detail about the car’s glass roof that he says delivers a “remarkable” experience for backseat passengers who can now see the whole world around them while they’re in the car. He also shows off the unique new door handle on the Model 3 that you have to push in first before pulling it out.

“What you have here with this car is really a distillation of what Tesla has learned from the Model S and the Model X,” he says. “There’s really elements of the best of both of those cars put together here and distilled into a smaller, lower-cost, more afforable — but just as intriguing of — a package.”