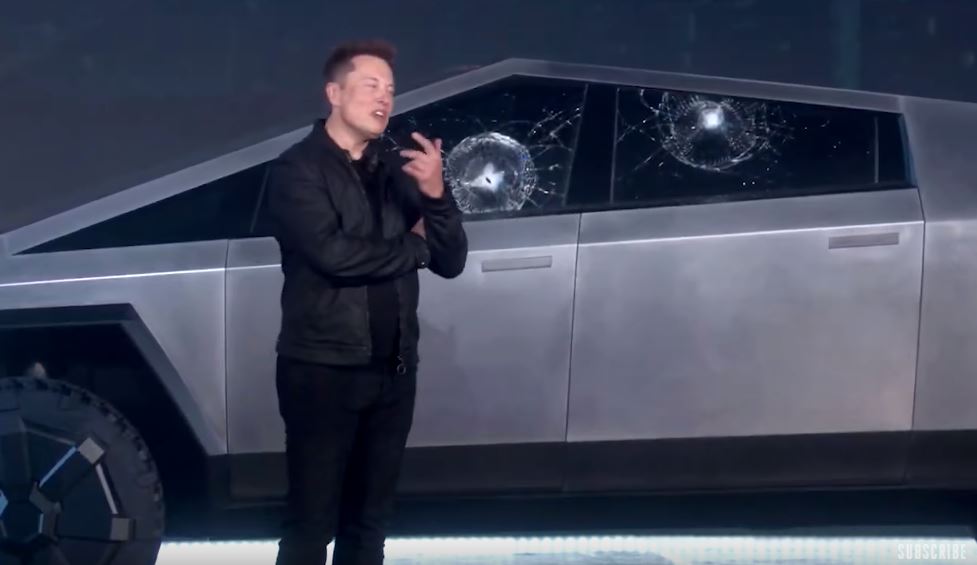 Tesla unveiled its next game-changing vehicle last night. The Tesla Cybertruck is a fully electric pickup-ish vehicle with an undeniably futuristic look and a whole laundry list of great features. One of those features is “Tesla Armor Glass” which is supposed to be impact-resistant. It is not impact-resistant.

In a demonstration, a separate piece of Tesla’s glass was compared to a chunk of standard auto glass. The Tesla glass held up to an impact while the other piece cracked. Then, Tesla boss Elon Musk tempted fate, asking one of his fellow presenters to attempt to break the glass installed on the Cyber Truck prototype on stage. That was a bad idea.

The small metal sphere that was pitched at the truck hit the window dead center and completely destroyed it. The projectile didn’t puncture the glass, which appears to be laminated, but it did completely shatter it. This was clearly an unexpected result, as Musk quickly uttered “Oh my f**king God…” before joking that maybe the throw was a bit too hard.

With a lighter touch, the sphere was then thrown at the truck’s rear window. It was an attempt to save face, and it was obvious that the impact was lighter this time around. It didn’t matter, and the rear window shattered just the same. The crowd giggled and Musk promised they’d work on it.

Now, it’s important to keep in mind that this is a pre-production vehicle. If Tesla wants to make its windows impact resistant, it certainly has the ability to make that happen. Still, it wasn’t a great look, and perhaps the worst part was that there was still plenty of presentation left to go, and Musk spent the rest of the event talking about all of the Cybertruck’s highly advanced features while standing in front of a vehicle with two busted windows. Oof.