In a world filled with smart cars, smartwatches, and even smart appliances like refrigerators and lamps, is it possible that smart clothing is the next frontier of technology infiltrating its way into all corners of our lives?

While it’s perhaps too soon to tell what the future holds, there’s certainly no shortage of ongoing research in this very area at both the university and commercial levels. Even Apple in recent years has filed patents that cover various smart clothing designs. Citing one example that surfaced just last month, an Apple patent detailed how fabric buttons with an array of smart sensors could be applied to everyday clothing items. Google is another company that has been working on smart clothing technology in recent years.

A more ambitious effort to blur the lines between clothing and technology was recently developed at China’s Fudan University where researchers created a smart textile that can be used in ordinary pieces of clothing while also having the ability to be used as a display, a touch-sensitive keyboard, or even as a way to communicate via Bluetooth. In effect, the textile itself is the technology.

A research paper detailing the technology and titled Large-area display textiles integrated with functional systems was published earlier this month in the journal Nature and can be viewed as a PDF over here.

While similar textiles have been developed before, the report relays that the new textile from Fudan University researchers is unique to the extent that it’s far more durable than previous designs. The study relays that the textile was able to withstand 1,000 cycles of bending, stretching, and pressing at various levels of intensity. In the end, the textile didn’t lose its ability to illuminate in any meaningful way.

The prototype designed by university researchers is a 20 foot by 10-inch piece of textile with “5 × 105 electroluminescent units spaced approximately 800 micrometres apart.” The textile boasts “conductive and glowing fibres” weaved in between regular pieces of fabric.

While use-case scenarios for such a technology remain unclear at this point, researchers suggest that it could be used not only for fashion but also as a way to help people with cognitive or communicative difficulties interact with people around them.

“Integrating displays into textiles offers exciting opportunities for smart electronic textiles – the ultimate form of wearables poised to change the way we interact with electronic devices,” the paper notes. “Display textiles serve to bridge human-machine interactions, offering for instance, a real-time communication tool for individuals with voice or speech disorders.”

Other potential uses include navigation, as evidenced by the illustration below: 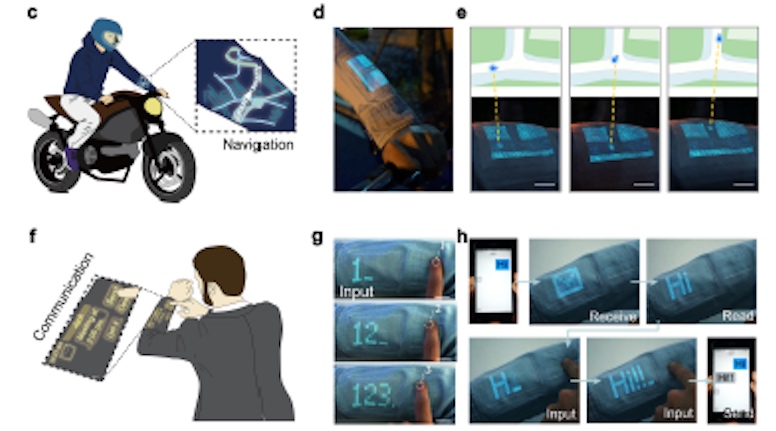 The research paper boasts that the new textile technology “unifies the fabrication and function of electronic devices with textiles” and that “woven-fiber materials will shape the next generation of electronics.”