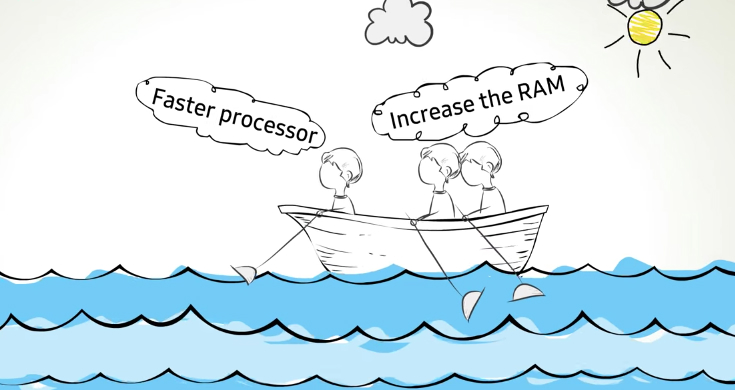 “[A] common belief is that phone performance can only be improved in two ways, either using a faster processor or increasing the RAM.”

You may think that’s a quote from Apple, perhaps the introduction of an explanation of why the iPhone regularly bests Android flagships in performance despite having specs that never seem to measure up on paper. But you’d be wrong. That’s how Samsung starts a new video intended to explain that mid-range devices can be very powerful without sporting high-end specs. This only begs the question: If Samsung can pull off amazing performance without bumping up processor speed or adding more RAM, why does it keep doing that with every new Galaxy S and Galaxy Note model it launches?

Samsung posted the new video on its Samsung Mobile India page to describe a new feature of the Galaxy J2 Pro 2016 edition, the Turbo Speed Technology (TST) that’s supposed to offer a fast, fluid smartphone experience. Samsung says its engineers went back to the drawing board to come up with software and hardware optimizations meant to improve smartphone experience even on a device that doesn’t have a cutting-edge processor or tons of RAM.

Samsung did shrunk some of the most used smartphone apps down, so that they consume less RAM while in use. TST also includes a “proactive app management” feature that lets the phone automatically kill apps that aren’t being used to free up more RAM. Finally, an “intelligent memory control” feature is supposed to rearrange and declutter RAM, to make more RAM available when it’s needed.

The TST feature is available only on the Galaxy J2 Pro, but it’ll presumably come to other Android smartphones from Samsung in the near future.

In fact, it’ll be interesting if TST will be included on the Galaxy Note 7, one of those upcoming devices that will have both a faster processor and more RAM – 6GB of RAM to be more precise. We won’t be able to answer that question until next Tuesday when Samsung unveils the new Note 7, so check out the video below in the meantime.