Will Samsung’s next-generation Galaxy S10 finally be the Galaxy phone exciting enough to get the company’s social media teams to stop using iPhones? Only time will tell, but in the meantime Samsung continues to have trouble convincing its various staff around the world to stop using smartphones made by its top rival.

Just last week, Samsung Mobile’s Nigerian arm was caught promoting the Galaxy Note 9 in a tweet sent from an iPhone. It’s obviously not the end of the world when something like this happens, but it’s certainly difficult to convince your followers on Twitter to buy a $900 smartphone when the employees promoting it can’t be bothered to actually use the phone themselves. Making matters worse is the fact that they’re not even using a different Samsung phone or even a phone from another company that runs Android. At least then no one would know. But when tweets are posted from iPhones it’s glaringly obvious to people who see the tweet, and it happened again on Tuesday.

This time around, Samsung’s new snafu took place in one of the biggest smartphone markets on the planet. The Samsung Mobile India team in charge of the company’s Twitter account posted a tweet early Wednesday morning that was intended to promote the new Galaxy A9. The account quoted a tweet from a user who captured what appear to be some impressive photos with the Galaxy A9’s camera, but only a small fraction of Samsung Mobile India’s 1.79 million Twitter followers likely saw the photos. Why? Because the company had to delete the tweet when people saw that it was sent from an iPhone. 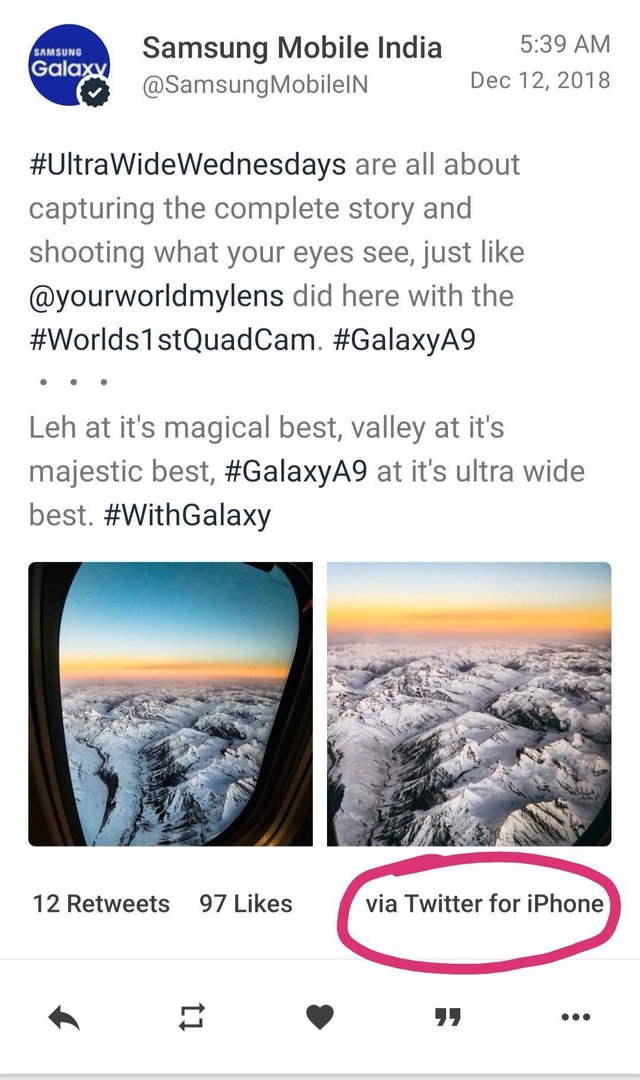 To be fair, it’s not just Samsung’s various social media teams around the world that have been caught with their pants down lately. A much more embarrassing “mistake” came early last week when Samsung was busted deliberately trying to pass off a DSLR photo as an image captured by one of Samsung’s own phones. Having a social media intern tweet from his or her iPhone is definitely nowhere near as bad as blatantly lying.