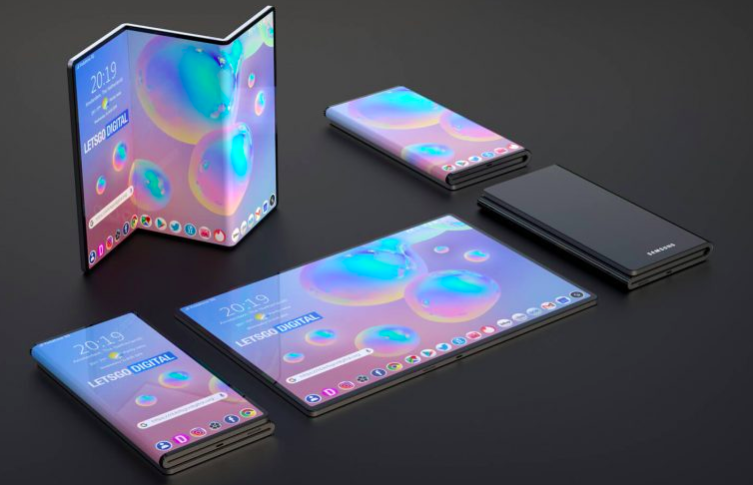 One of the highest-profile tech stories of 2019 so far involves a product that’s about a month or so from launch, and which was supposed to have already launched earlier this year until embarrassing mistakes squelched that possibility. We’re talking, of course, about Samsung’s $2,000 Galaxy Fold that will present consumers with an entirely new smartphone form factor – at least, those consumers who aren’t turned off by the ridiculously expensive price tag and the fact that it folds and is being launched with the promise that earlier design flubs have been addressed.

While all this has been happening, meanwhile, Samsung has been at work behind the scenes not only on future iterations of the Galaxy Fold. The company believes in a foldable handset design so strongly that it’s also been patenting all-new foldable concepts, with the latest having just been spotted.

Back in May, a month after the original Galaxy Fold was supposed to have launched, the Korean Intellectual Property Office approved Samsung’s patent for a smartphone with a Z-fold design (meaning, it folds in two places and can thus be bent into a Z shape). It’s a simple but multi-functional smartphone design that’s presented in the patent herein (h/t LetsGoDigital), which imagines a handset that includes one large screen that also happens to be bendable, with barely existent screen edges.

The color renderings based on the patent that you see in this post were prepared by LetsGoDigital and present, as we say, a device that doesn’t look half-bad, and even stylish, it could be argued.

The 23 sketches included with the patent filing reveal a device that expands to basically the size of a tablet, with the two folding lines that we mentioned. It seems to be envisioned that you can fold the sides of the device back so that the screen becomes the exterior (as you can see in the upper right portion of the rendering at the top of this post). Additionally, you can fold the device closed such that the screen remains on the interior.

The size of this device seems to be about three times wider than most flagship phones, which reflects Samsung apparently thinking that some consumers out there want a phone, tablet and small PC all in one device. Samsung Display filed for the patent in this case, though, so as the patent didn’t originate with Samsung Electronics we don’t have a sense of things like how the interface will be operated or what the camera specs might be.

Of course, while we not only don’t have a sense that this concept will become a tangible product anytime soon, both Samsung and Huawei still have yet to launch their first such devices along these lines — the Galaxy Fold, as we mentioned, and Huawei’s Mate X rumored to be landing in a matter of weeks. For the time being, the foldable form factor remains an as-yet-unrealized ambition, though that will seemingly change soon.