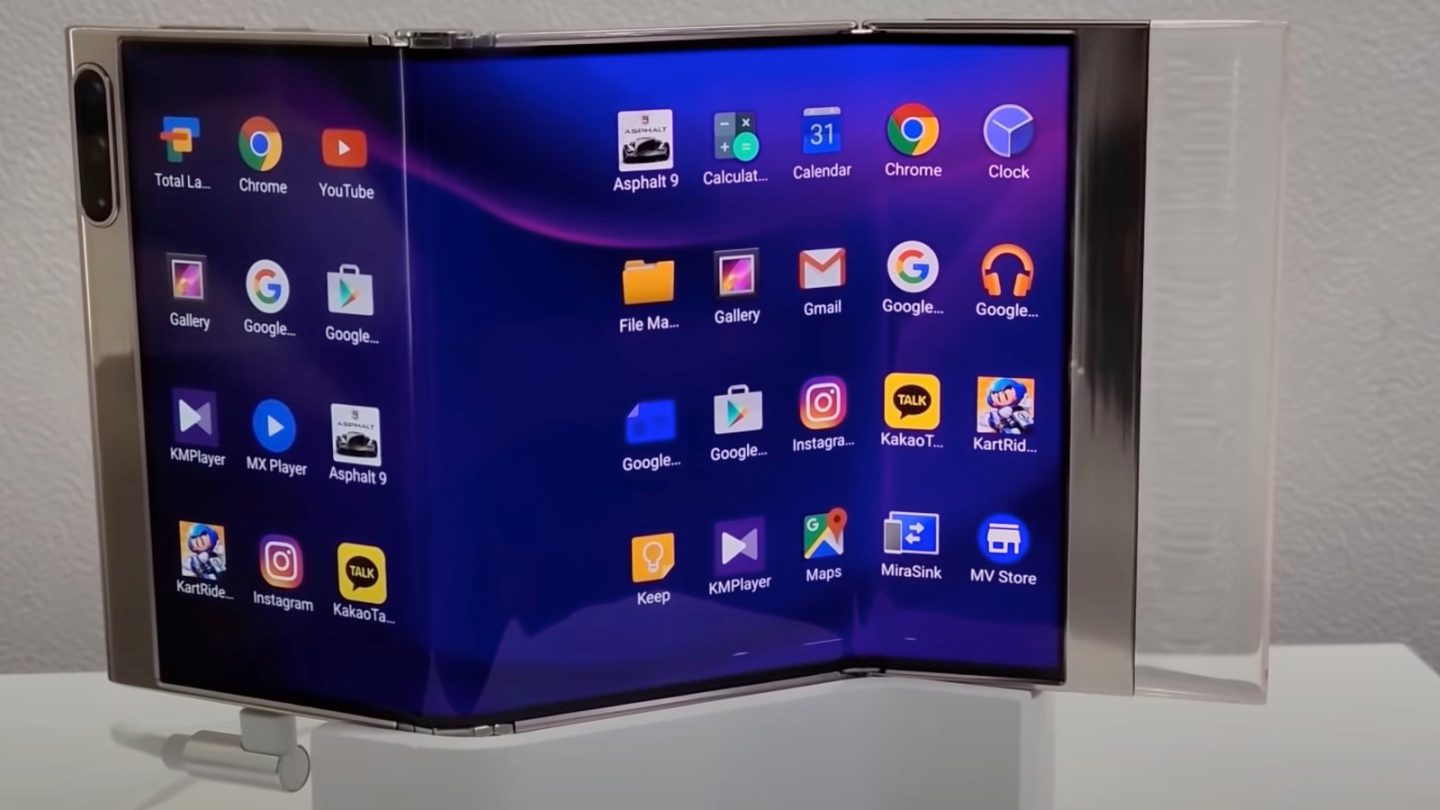 The Galaxy Z Fold 3 and Flip 3 are performing well, but Samsung is already teasing other even more experimental foldable devices. Just a few days ago, we learned that Samsung’s 17-inch foldable laptop that the company teased back in May might turn out to be a real product. An insider leaked the Galaxy Book Fold 17’s product name. This finding suggests Samsung is already working on a commercial version of the concept. But just days before that, Samsung was demoing a prototype of a multi-foldable device it calls Flex In & Out (seen above). We saw this concept only a few months ago when Samsung unveiled the S-Foldable screen.

Back in mid-May, Samsung attended SID, unveiling the following dual-folding device. As seen in the image below, the S-Foldable handset features three display parts and two hinges. It folds like the letter “S,” hence the name.

Samsung demoed the nameless 17-inch folding laptop at the same event. But the company used the same video where the S-Foldable screen is present.

Also, in the video, there’s a rollable Samsung display concept. At the time, it wasn’t clear whether any of these foldable screen concepts will make it into commercial products.

Here’s how Samsung described the S-Foldable display in its SID 2021 announcement:

A multi-foldable mobile display that maxes out at 7.2 inches but can be folded twice—both in and out—to be as small as a regular-sized smartphone.

Samsung Flex In & Out

This brings us to the 21st International Meeting on Information Display (IMID 2021) event that took place in Korea a few days ago. That’s where Samsung produced the following video. The clip focuses solely on a device that looks a lot like the Samsung multi-fold screen from SID 2021. But Samsung used the display event to demo its Flex In & Out multi-foldable OLED display.

From the looks of it, the Flex In & Out might be the new name of the multi-foldable screen tech that Samsung is developing. It wouldn’t be surprising for Samsung to sell Flex In & Out displays to other vendors. Just like the Infinity Flex panel in the Galaxy Z fold 3 might equip other non-Samsung foldables this year.

That said, it seems that the Samsung S-Foldable screen and the Flex In & Out screen are identical. Both of them have the same size, 7.2-inch, and fold similarly. And they feature identical designs, complete with the transparent portion on the right side.

Given that Samsung is at the forefront of foldable device innovation, a title it will likely want to retain for as long as possible, it’s probably only a matter of time until we see a multi-fold Galaxy Fold variant in stores. Samsung’s IMID 2021 presentation makes it clear that Samsung has big plans for the technology.

Flex In & Out S-Foldable Samsung