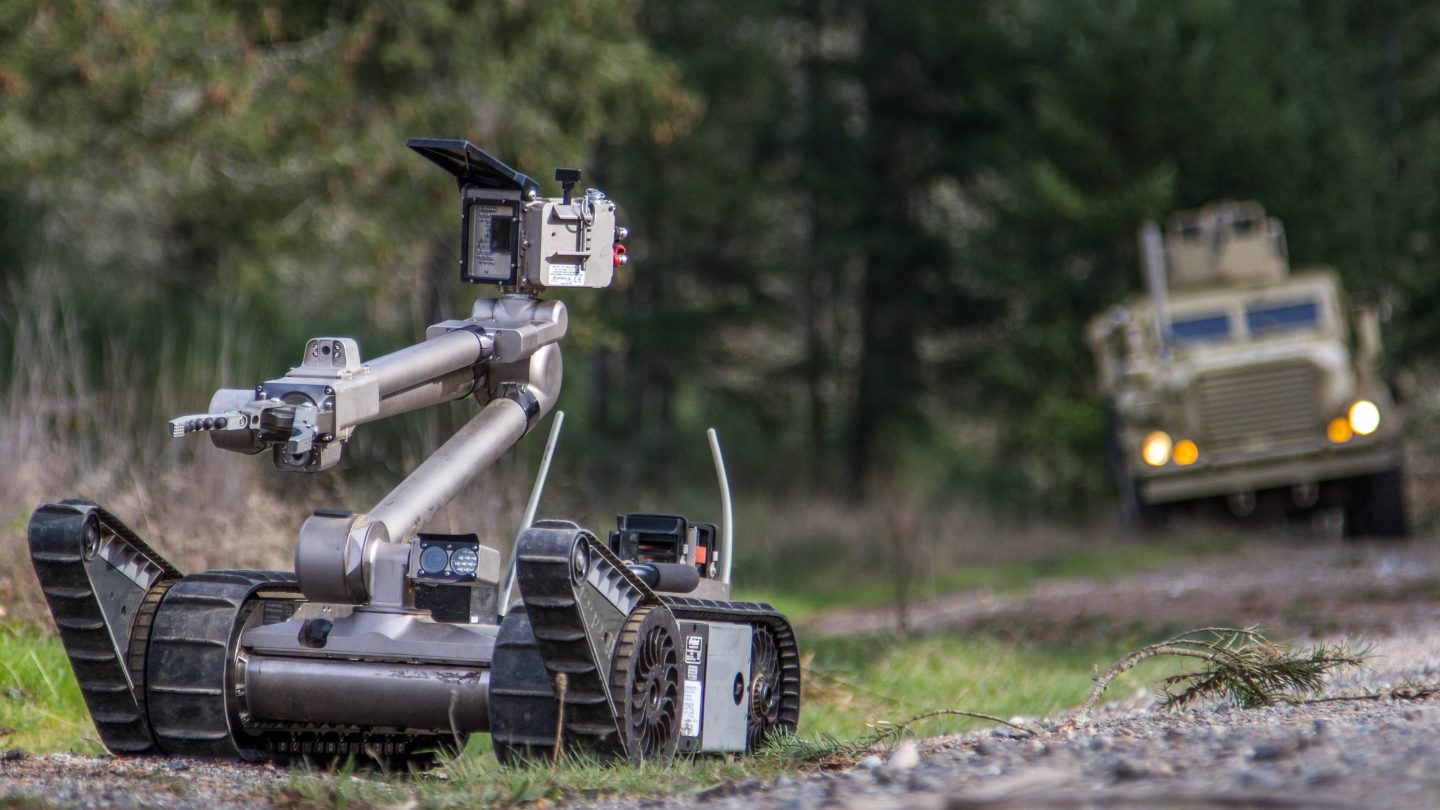 If former Marine and entrepreneur Sean Bielat has his way, the law enforcement officer tentatively approaching a vehicle in the future after making a traffic stop won’t be an officer at all. Rather, those are the kind of interactions — fraught with uncertainty, potentially dangerous — that seem to him to make perfect sense for one of his robots to deal with instead.

Bielat is the CEO of Endeavor Robotics, a privately held ground robotics company that in April spun out of Mass.-based iRobot and is focused on the defense, public safety and energy and industrial markets. It’s a young company, but already Endeavor has delivered some 6,000 robots to customers, everything from a roughly five-pound throwable robot perfect for surveillance and reconnaissance up to its 500-pound beast called the Kobra.

The Kobra has a 12-foot arm and can lift loads of up to a couple hundred pounds. Endeavor sees it as ideal for helping resolve large threats or dealing with things like vehicle-born explosive devices. The company has also been involved in trials with the Army using this robot, positioning it as potentially able to carry a squad’s equipment load.

Needless to say, a company narrowly focused on these specific kinds of machines — and on a future that puts robots increasingly at the center of war and public safety — is a company that’ll no doubt be worth increasingly watching over time. Because of what Endeavor represents, and the product line it has on offer, the company also believes it has a massively lucrative future ahead of it.

Bielat said the goal is for Endeavor “to be much larger than we are today.”

“Right now, it’s an exciting time for us in that during the early part of the 2000s, the Department of Defense was buying a lot of robots,” Bielat tells BGR. “They were buying them off the shelf, with contingency funds and very rapidly and in large numbers. After we pulled out of Iraq and Afghanistan, the ground robotics space saw a big decline in revenue as a result of that. But the robots have proved their value to the DoD, which has gone back to traditional acquisition approaches through programs of record.”

Among other things, Endeavor says that new system will increase the operational range of its robots in urban areas and other “radio-challenged” environments. Longer term company targets include things like getting the price of robot units down so clients like cash-strapped police departments can more easily afford them.

The robot on the low end of Endeavor’s price scale costs about $19,000.

One thing worth noting as the company is on the march to expand: not only does Endeavor have defense industry clients paying up for its robots, but so increasingly are law enforcement agencies. Like agencies in the greater Dallas area, where Endeavor has acknowledged selling its robots and where, last month, Dallas police used a robot to deliver and detonate an explosive that killed the shooter who murdered five police officers. (Endeavor says it isn’t sure if the robot was one of theirs.)

“In order to support the infantry, we’re going to be making lighter-weight robots and lesser expensive robots,” Bielat says. “Currently of the 6,000 or so we’ve fielded, a couple hundred have been to law enforcement — and law enforcement really wants the technology, it’s just a matter of the price point.

“Currently, ours are out of the reach of the budgets of many law enforcement departments. As the military buys in bulk, that allows us to have a lower-priced robot that’s easier for law enforcement to afford.”

Endeavor, Bielat went on, is also looking even beyond law enforcement uses cases. He said the company can foresee “broad applicability” for its robots, eventually putting them into use in commercial and industrial situations, as well.

In addition to Endeavor’s five-pound robot, it also has one that comes in at a little under 20 pounds. It can be used to manipulate things like improvised explosive devices. There’s also a heavier one called the PackBot that weighs about 65 pounds.

That one is used in counter-IED and explosive ordnance disposal roles. The largest robot above that is the Kobra.

“We’re really focused on technologies that save lives, that reduce harm to people,” Bielat said. “We see all sorts of potential for robots taking people out of dangerous situations. You could imagine just like in San Diego recently, where you had two policemen shot at a traffic stop. You could imagine robots being used to approach a stopped vehicle and interact with the people inside, so the people inside aren’t feeling threatened by an armed officer and the officer isn’t feeling threatened by the people in the vehicle and not knowing what their intention is. You’re defusing the situation.”

And, of course, also adding something to the situation – something profoundly new, that we as a society haven’t begun to completely think through yet.

It’s somewhat parallel to the AI-run-amok debate. Autonomy isn’t a feature of Endeavor’s robots, but just like the cautionary notes being heard in some corners of the scientific and technology community about AI, the same thinking perhaps applies here.

The implications of robot-led warfare and law enforcement raise questions about ethics, about where the line should be drawn and how far down this road we should continue. For now, Endeavor stresses that the benefits here are paramount — its technology is in a unique position to save lives.

Scholar Wendell Wallach takes the other side of the argument in his book A Dangerous Master: How to Keep Technology from Slipping Beyond our Control.

“It is becoming increasingly difficult to comprehend the risks entailed in emerging forms of scientific research and in the adoption of innovative technologies,” he writes. Later, he continues: “Our expanding reliance on complex systems whose risks we do not or cannot calculate is troubling.”