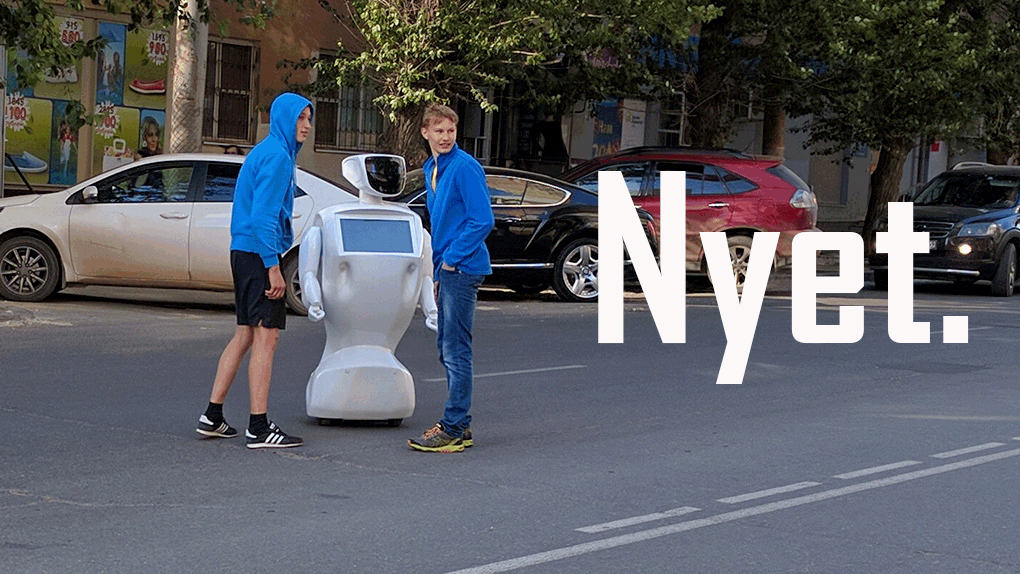 Yesterday, the internet went slightly crazy for the story of Promobot, a Russian-made “runaway robot” that escaped its handlers and caused a traffic jam on a suburban Russian street. It’s a story perfectly set up for viral success: out-of-control machinery, Russian dashcam footage, and a cute little robot is a YouTube traffic-maker from the heavens.

The only little niggle? I’m personally pretty sure that the entire thing was fabricated to generate publicity.

DON’T MISS: iPhone sales in China at risk after firm accuses Apple of copying its design

There’s no smoking gun pointing to this story being fake, but a look through the story, how it spread across the internet, and the mechanics of how ‘Promobot’ would have escaped all point to this being a very effective (but very fake) news story.

The account posted by Promobot goes something like this: around midday on Wednesday (local time), Promobot was being tested in Promobot’s facilities in a small town in Eastern Russia. After testing, an engineer forgot to close a security gate, and the robot escaped through the offices and onto the street, where its battery died, and it sat in the road. Onlookers gathered around, followed by the police, until the company found its robot some 45 minutes later.

Right away, there are some logical inconsistencies here. In a photo posted by Promobot above (and in every other video of the affair), you can see that the screen and face is clearly turned on, even though the company said it was stranded with a dead battery.

The cops also appear to have closed down the lane of traffic and waited for someone to come sort out the problem. In my very limited (and very foreign) dealings with Russian traffic cops, I would’ve thought that they would pick up the robot, move it the two feet to the curb, and re-open the road.

I also have my doubts about this robot’s ability to “escape.” In every previous video posted of the robot, it demonstrates the ability to move at about one mile an hour over very smooth ground. In the videos of the robot’s jailbreak, and in Google Street View images of the alleyway it has to escape down, there’s curbs of an inch or two clearly visible. I’m also skeptical that between the robot’s pen and the street, there was not one single stair or doorway. And, for that matter, that no one noticed a small Dalek motoring past them at a mile an hour.

Then there’s how the story spread around the internet. Within hours of the escape, Promobot had written a very professional-looking blog of the incident, complete with “bystander” photos and videos of the event. All the photos have been stripped of metadata before uploading, which prevents us from seeing when they were taken, by whom, and with what kind of camera. This isn’t standard practice for whoever runs the Promobot blog, since photos from previous posts still have the metadata intact.

The video itself is uploaded to YouTube on Promobot’s account, which is plausible, but still a little strange. There’s no version I can find uploaded by the eyewitness themselves, which is unusual for a public, newsworthy event like this. Normally, you see the original uploaded to YouTube, Facebook or a similar service, and then embedded in blog posts by companies or news agencies, with attribution.

Once the story hit Promobot’s blog, it spread impressively quickly across the internet. The first mention I can find in English-speaking media is in the Daily Mail, a British tabloid notorious for its shoddy journalism. Worse, this isn’t even original Mail content — it’s a syndicated post from Central European News, a news agency that’s infamous for posting stories that are outright false in order to generate traffic. Every post on the topic since appears to have been aggregated from a combination of the CEN write-up, and a Google Translate version of Promobot’s own post.

CEN has been the subject of an investigation by Buzzfeed News, and the founder, Michael Leidig, was sued in court after accusations he falsified interviews for a book. (He was subsequently cleared.) Since then, the Central European News agency has been accused of posting a number of patently false stories, posting real images accompanied by a completely false story. That sounds rather familiar.

Why would Promobot want a story about its robot escaping custody? The answer lies at the bottom of the Promobot post (excuse the Google Translate):

Active navigation system is not all the innovations which will be equipped with the new version promobota. It will be a completely new product for the market of service robots, which will combine all the benefits of the products in this market.
We are now considering the opportunity to present the third version of our robot, or in San Francisco (this feature is negotiated) during the conference TechCrunch disrupt 12-14 September 2016, either in Moscow at the end of September 2016.

Promobot is one machine in a crowded field of human-assist robots. It’s also slated to go up against the best of Silicon Valley at the TechCrunch Disrupt conference in September, where it will want to stand out against the competition. What better story to advertise the capabilities of an autonomous assistant robot than “robot escapes from handlers, charms strangers in the street?”

None of this is proof that the escape was staged. Who knows: maybe the robot escaped from its pen, used the step-free access from its lab to the street, lost motor power at just the right time, and surrounded itself with DSLR-toting photographers who handed over their images with zero request for attribution. But I’ve been around the internet enough to smell a publicity stunt when I see one.